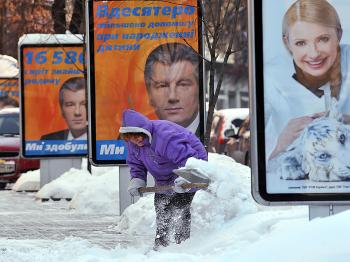 Andrey Volkov
View profile
Follow
biggersmaller
Print
KYIV, Ukraine—Questions about the integrity of the Ukranian election process are being raised, two weeks before polling day on Jan. 17. Some of the fund sources for the candidates have not been clarified, there are concerns over fraud, and the incumbent Yushchenko has requested increased oversight from the EU.

The Central Election Commission (CEC) held a press conference yesterday explaining that 80 percent of the candidates’ funding has been identified, but 20 percent remains to be explained. The CEC has not yet received this year’s funding estimates and the main financiers—the Ministry of Finance of Ukraine and the Treasury Department—don’t work over the weekend. “After the holidays, we hope for a quick and effective response to our proposal from the Ministry of Finance and State Treasury”, Michael Ohendovsky from the CEC said at the press conference.

He said that the CEC would prepare an estimate for the financing of elections planned for that year over the following days.

Meanwhile, current Ukranian President Viktor Yushchenko has expressed his intention to apply to the European Parliament and the Organization for Security and Cooperation in Europe to increase the number of foreign observers for the election.

His rival, Viktor Yanukovych, head of the Party of Regions, also suspects possible fraud at the polls.

Ukrainian political analysts say that the two candidates with the greatest chance of reaching the second round of the election are Yulia Tymoshenko and Viktor Yanukovych. Both politicians have been prime minister and are experienced in foreign policy with Russian, an important portfolio for Ukraine.

“These candidates are already working to ensure the most concentration of voter support around them. So in the first round they will be competing among themselves,” said Volodymyr Fesenko, the director of the Penta Centre for policy analysis.

He believes that the rest of the candidates will fight for third place trailing by a significant margin.

Some political scientists have suggested that the primacy of Tymoshenko and Yanukovych can be explained by political manipulation rather than democratic choice.

“Now we have been imposed with two candidates of the two oligarchic groups. I understand that everyone works out his money, but we are being imposed, saying that the winner is either Viktor Yanukovych or Yulia Tymoshenko,” says Valery Bebik, head of the Ukrainian Association of Political Sciences.

On the eve of presidential elections in Ukraine work also began on a series of trainings for members of the polling stations. The members are mostly volunteers.

Education takes place in the framework of cooperation set up between the Ukranian CEC and the Organization for Security and Cooperation in Europe (OSCE); the OSCE gave 1.5 million euros to Ukraine for the purpose.

All heads, deputies, and secretaries of polling commissions and stations will attend the training. For those who cannot attend the seminar, the OSCE has developed training materials and films. About 80,000 people will play some organizational role in the election campaign.

While debating between presidential candidates started on Ukranian television yesterday, a number of notable contenders have opted out of the discussions. These include President Viktor Yushchenko, Prime Minister Yulia Tymoshenko, Speaker of Parliament Volodymyr Lytvyn, the leader of the opposition Viktor Yanukovych, and candidate Arseny Yatsenyuk.

The total number of challengers for the presidency is 18.