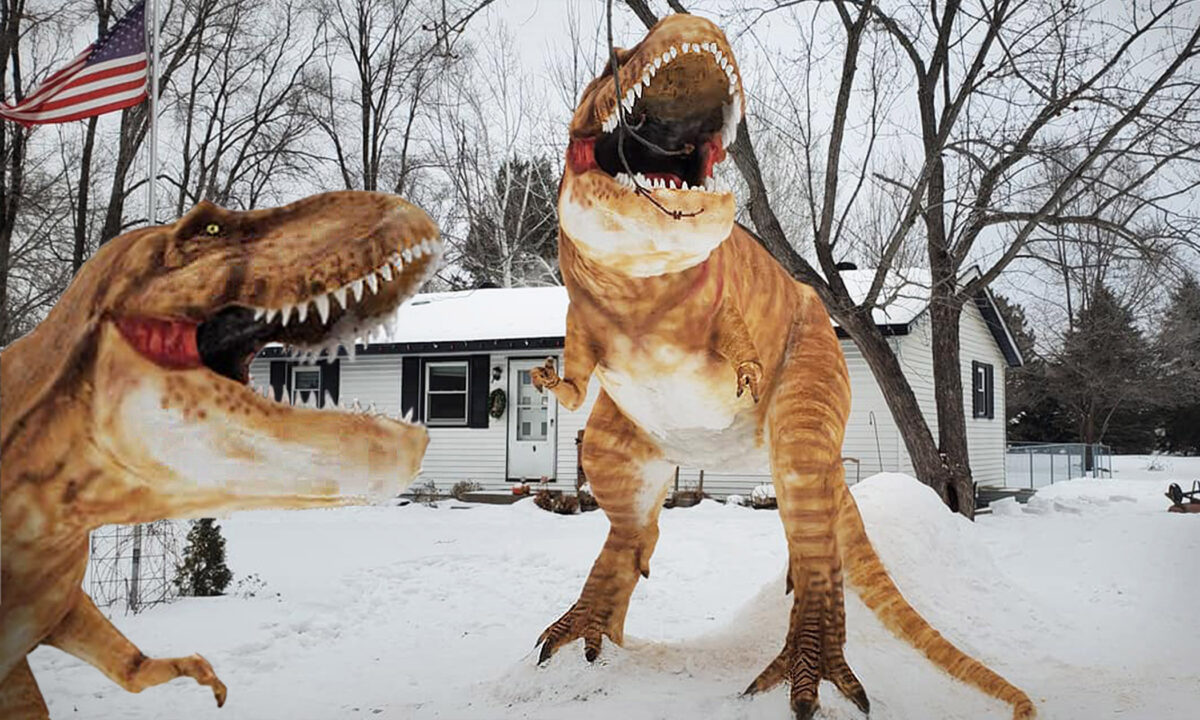 There’s one in every town. Sometimes it’s the local Christmas light bug who sets the night ablaze with electric winter wonderlands (shorting out the grid) each season. Or in Becker, Minnesota, it’s Paul Larcom packing together life-sized snow dinosaurs on his front lawn.

Erected mid-January, his giant snow T-rex—complete with long tail; dragon-like body; gaping, roaring jaws; and sharp, menacing teeth—is an over-the-top take on the traditional snowman, and then some.

The 29-year-old, who works as a greenhouse supervisor by day, clearly loves playing in the snow during off hours—and impressing his neighbors at the same time. Larcom’s frozen creatures began with a leprechaun and pot o’ gold for St. Patrick’s Day in 2009, as suggested by his sister Jenny. And the trend snowballed out of control from there.

“We got a lot of nice comments about the leprechaun and I had a lot of fun making it so I decided to make another,” Larcom told The Epoch Times. “I wanted to make something from Star Wars, so I made a 10-foot-tall wampa snow monster.”

After the wampa, which wasn’t that visible from the street, he sculpted the giant racing snail from “The NeverEnding Story” and Han Solo frozen in carbonite from “The Empire Strikes Back,” placing them prominently by the roadside. “So far I think I’ve made about 10 or so,” he said.

He got the dinosaur idea from that same Star Wars sequel.

“One year, when I made a snow tauntaun from Star Wars, people thought it was a dinosaur and were a little disappointed to find out it wasn’t,” Larcom said. “So I thought this year I’d make a dinosaur from ‘Jurassic Park,’ since people seemed to like the idea of a snow dinosaur.”

The impressive structure of the T-rex required some ingenuity on Larcom’s part. Built like a tripod, its two legs and tail serve as the base. Its overhanging neck and head are supported with a skeleton made from sticks: one stick for the tail, two for the legs, and one long stick for the spine. The head is mostly hollow to keep weight down, he explained.

The trick is warming up the snow slightly inside his house to make it stick. He needs a 10-foot ladder and buckets to haul material to the top of the massive beast.

“Then I like to add a layer of paint to make it stand out a bit more,” he added. “There’s been cars lined up around the block to see it and some people couldn’t believe their eyes. And some were just plain speechless.”

Larcom never expected the T-rex to take off like it has, with media wanting to interview him and take pictures.

As far as motivation for creating the prehistoric blizzard lizard, he said the aim is to “make something cool” that passersby would enjoy, and of course “just to have fun.”

“My hope is that I’ve inspired someone or brightened up someone’s day or even just made someone smile,” he added.