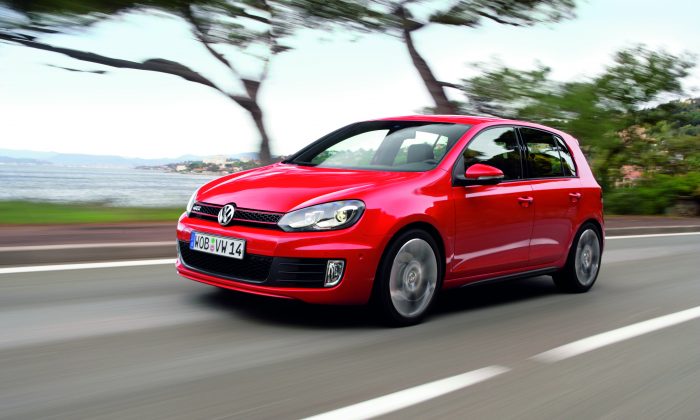 It's the 2013 VW Golf GTI, or whatever year. It always looks the same, so it will never go out of style, right? (Volkswagen)
Autos

The verdict is no surprise
By Zoe Ackah
biggersmaller
Print

Despite being front-wheel driven, both the Volkswagen GTI and the Mini Cooper S are true sports cars.

On paper they have so much in common: Similar power-to-weight ratio, excellent 6-speed manual transmissions (automatic is available too of course), 0-60 mph acceleration in about 7 seconds, inline 4-cylinder engines, similar turning radii and wheel base size, and both have MacPherson struts in the front and multi-link suspension in the rear.

If they look so similar on paper, do they drive the same?

Nope. They really and truly don’t. We’re talking night and day almost. Since both are great, how do you choose? For me there was an obvious winner.

The two-door Mini Cooper S is, in my humble opinion, the only Mini to have. Let’s not even talk about recent aberrations such as the Paceman, or the worst of all—the Countryman.

The Cooper S possesses more horsepower and torque than a regular Cooper. What does that mean while you drive? It simply oozes power out of every pore. It’s insane. Guts and glory are delivered everywhere in the rev range due to over-boost—completely banishing turbo lag and giving you more than you realistically need when you so much as tease the throttle.

The agility and available oomph are both ridiculous and ubiquitous, making the Cooper S one of the most entertaining cars to drive ever, ever, ever.

The Volkswagen GTI is the benchmark hot hatch—the hatch against which all others are measured. It is tried, tested, and true. Far more comfortable a ride than the Mini, not only is it smoother, you can fit five real people in it, or fold the backseats forward and fit a dryer in the back. It is practical and versatile.

In fact, the driving experience is like having two cars in one.

Modestly apply throttle, generally behave yourself, and you’ll think you’re in a regular Golf. The suspension is set up a little softer, making it a very comfy daily drive.

But it you give it the beans, it’s a monster. At around 3,000 rpm it says, “Oh right—to hell!” and suddenly you’re in a sports car having fun—good, clean, comfortable fun.

And it corners better with less squirrely wheel spin than the Mini, which surprised me. It mastered every on-ramp.

The Mini is certainly a blast to drive, but the ride is a little jarring and it made my kids carsick. The trunk is too small—it only seats four—and the controls were awkward. The cockpit was not as well organized as the GTI’s. Everything, from Bluetooth audio to the placement of the manual controls, functioned better in the GTI.

I’d have the Mini if it had the sensible controls of the GTI (and just get the kids sick bags), but the Volkswagen is just as fast and way more comfortable. The GTI sits neatly at the centre of the continuum between lunacy and utilitarianism.

That said, I strongly encourage you to test drive them both, even if you’re not buying either. It will make for a fun afternoon.