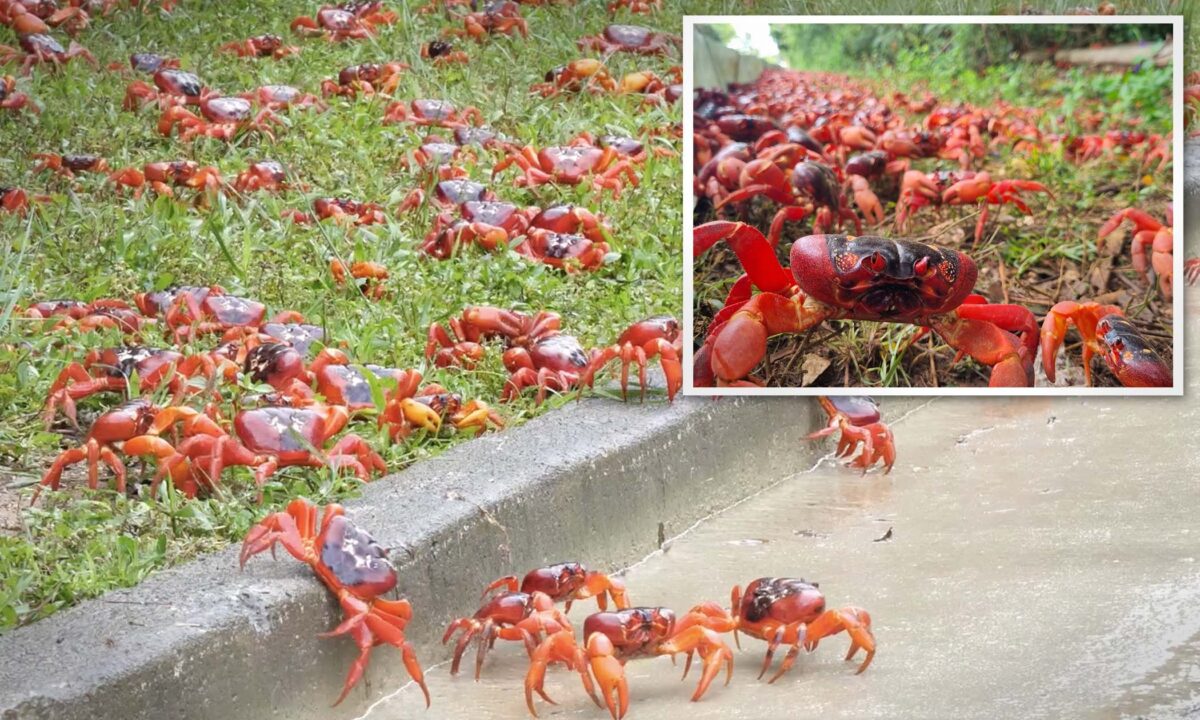 In one of the world’s most spectacular wildlife migrations, 65 million red crabs have begun their annual 20-kilometer (nearly 13-mile) trek from the tropical forests of Christmas Island to the sea to breed. The inhabitants of the Australian territory, located in the Indian Ocean, have more protective measures in place than ever before.

“The red crab is the island’s keystone species, and the health of its population underpins the health of the entire island ecosystem,” said Christmas Island National Park’s invasive species manager, Derek Ball, in a news release. “Each year the red crabs make their annual pilgrimage from the forest plateau down to the sea to mate and spawn. It’s an event that captures the attention of nature lovers across the world.”

In perfect synchronicity with nature, the red crabs’ annual migration is triggered by the onset of the wet season. At first rainfall, the crabs set off on their 20-kilometer journey. It happened this year on Oct. 29.

“The next morning there was millions of crabs that just came out of the burrows all across the island,” wildlife photographer Chris Bray told Australia’s ABC News. Christmas Island resident Will Parker said, “The sound is the thing that sticks in my mind the most, millions of tapping little feet all driven by a fierce instinct to get to the ocean for the sake of the next generation.”

The speed of the crabs’ progress is determined by the phases of the moon. Adult male crabs return to the forest after mating on the shore; females will wait in their burrows for up to two weeks while their eggs develop, then release up to 100,000 eggs into the Indian Ocean before dawn on a receding high-tide during the final quarter of a waning moon.

The surviving babies return to shore a month later to make their first trek into their tropical forest home. In line with the lunar cycle, the 2022 spawning event is expected to take place on Nov. 18 and 19.

“It’s only been a few days, but it certainly looks like this is going to be a huge migration,” said Ball.

Road closures and warning signs alert drivers to the migrating crabs, while temporary barriers and “overpasses” set up along the roadside herd them along a safe route to the sea. It’s a collaborative effort between the National Park staff, federal police, and the local community, some of whom will gently sweep errant crabs back into the swarm.

Christmas Island comprises an 85-square-kilometer (53-square-mile) limestone volcanic peak surrounded by coral reefs, snorkeling, and diving spots; the National Park covers 63 percent of the island. Ball said the red crab population has more than doubled in the past five years, from between 45-50 million to 100 million, thanks to the implementation of programs designed to protect their numbers.

In 2016, the island pioneered biological control of yellow crazy ants (that is their official name), one of the world’s most invasive species, by starving them of one of their major food sources. These ants attack red crabs when they migrate through the insects’ “supercolonies” by spraying them with acid before eating them.

After a massive eradication of yellow crazy ant supercolonies in 2019, red crab migrations have grown in size, as have the numbers of baby red crabs returning to the tropical forest. In a further effort to protect Christmas Island’s unique flora and fauna, a huge 277,000-square-kilometer (172,000-mile) “marine park” has also been designated in the waters around the island.