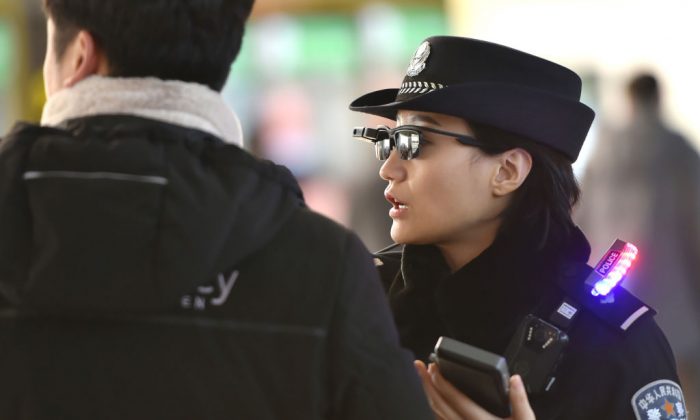 A police officer (R) speaks as she wears a pair of smartglasses with a facial recognition system at Zhengzhou East Railway Station in Zhengzhou, Henan Province, on Feb. 5, 2018. (AFP/Getty Images)
Chinese Regime

China’s push to implement a nationwide social credit system by 2020 is on full throttle as millions have been prohibited to fly or ride on high-speed trains, according to the latest statistics by the Chinese regime.

As of the end of April, about 10 million Chinese who have defaulted on their debts have been banned from flying 11.11 million times and denied access to high-speed trains 4.25 million times, reported the Chinese regime’s mouthpiece People’s Daily on May 16, citing data from China’s National Development and Reform Commission (NDRC), a planning agency under the State Council.

The travel ban was part of the social credit system, because, according to People’s Daily, it would “reward citizens with a good credit record and punish repetitive violators.”

China first announced plans for a social credit system in 2014—where every Chinese citizen will be rated according to his online, social, financial, and legal behavior. Misdeeds, such as using fake IDs at train stations and airports, refusal to sign up for required social insurance, and failing to pay fines for illegal actions in stocks or futures trading, could result in a travel ban on using trains for 180 days and flying for a year, reported NDRC in March. The penalty went into full effect in May.

Frank Xie Tian, a business professor at the University of South Carolina–Aiken, explained that while the credit scoring system in the United States is about “ensuring the effective operation of the economy and financial system in society,” China’ social credit system is completely different.

China’s system is about ruling over people and a form of oppression, Tian said in an interview with The Epoch Times.

While the Chinese regime says its system is about “purifying” society and rewarding people who are trustworthy, it could, in fact, be used to target and silence dissidents and other groups in China.

“For example, I know people who have become petitioners seeking redress for their grievances. They were included into a list of people with bad credit,” said Qin Weiping, an economic scholar and former reporter in China, in an interview with Radio Free Asia (RFA).

Petitioning originated from ancient China, when ordinary citizens would travel to the capital and plead with imperial court officials as a last resort to seek justice. The practice still exists in modern-day China.

Today’s petitioners, however, face the risk of harassment and being thrown into black jails—extralegal facilities designed to hold and intimidate petitioners into giving up their petitions—by Chinese Communist authorities.

Qin added that dissidents in China could also be included into the list of people with low credit ratings, given the Chinese regime’s history of using surveillance and other advanced technology to monitor and suppress dissidents.

Mr. Bao, a petitioner from northern China’s Hubei Province, recalled his experience with the travel ban in an interview with New York-based broadcaster NTD.

“Two days ago, I went to Wuhan [the capital of Hubei] and I tried to buy a train ticket. I got a call immediately, telling me I couldn’t board,” said Bao. “This system is about controlling people, where people become so transparent that they don’t have any privacy.”

Li Shanjian, a U.S.-based independent political commentator, warned of the dangers of the social credit system.

“With the Chinese regime, there is no check on the system,” Li told The Epoch Times.