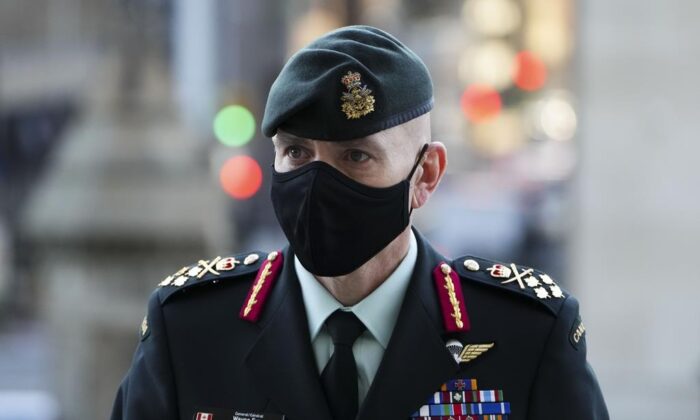 Chief of the Defence Staff Gen. Wayne Eyre arrives on Parliament Hill prior to a cabinet meeting in Ottawa on Nov. 23, 2021. (The Canadian Press/Sean Kilpatrick)
Canada

Unvaccinated public servants were allowed back to work on June 20, including civilians of the Department of National Defence (DND), but unvaccinated Canadian Armed Forces (CAF) personnel will have to wait for their employer’s review of the vaccine mandate to know their fate.

“Given updated guidance from the Treasury Board, we are currently reviewing the CDS [Chief of Defence Staff] Directives on COVID-19 Vaccination, in order to maintain a safe working environment and while remaining ready to conduct CAF operations in support of Canadians at home and around the world,” DND said in an emailed statement on June 22.

“In the meantime, the CDS Directives remain in effect for CAF members until further notice.”

The CDS directive, which was issued in October, allowed for exemptions under medical, religious, or human rights grounds, but not many have been granted.

Out of 1,300 exemption requests, DND says that as of May 31 only 157 were granted, with 98 for religious reasons, 42 for medical reasons, and 17 for “other reasons” (which can include claims of discrimination under the Canadian Human Rights Act).

The department says that as of June 15, the voluntary release of 103 regular forces members has been granted by the CAF. Those members cited the directive on vaccination as the primary reason for seeking release.

Another 234 CAF members have been released non-voluntarily for not complying with the directive.

As of June 15, 805 soldiers face remedial measures. If the CAF judges those measures to be unsuccessful, further administrative actions can be taken leading to release.

Lawyer Philip Millar, a CAF combat arms veteran, is representing about 30 armed forces members affected by the vaccine mandate. He predicts the CDS will not expedite the review in order to release as many non-compliant personnel as possible.

“Now that it’s clear that the mandates are untenable, unjustifiable, and unconscionable, the CDS is dragging its feet because the longer they wait, the more people get released,” he said.

Millar was set to debate a motion in court on the CAF vaccine mandate this week but the hearing was postponed.

“I’m sure they knew [the motion] was going to be successful, and that’s why the government changed it, but they’re playing games with people’s lives,” he says.

The CAF currently has issues with recruiting, and Millar says the vaccine mandate isn’t helping.

“The Canadian Forces currently has a huge manpower shortage—nobody is joining. And they’re kicking out hundreds of people who have given 10 years of their lives, there’s $200,000 invested in their training. It’s just politics,” he said.

Last November, an outbreak occurred during a training exercise at the Petawawa base amongst the fully vaccinated participants, which led to the cancellation of the exercise.