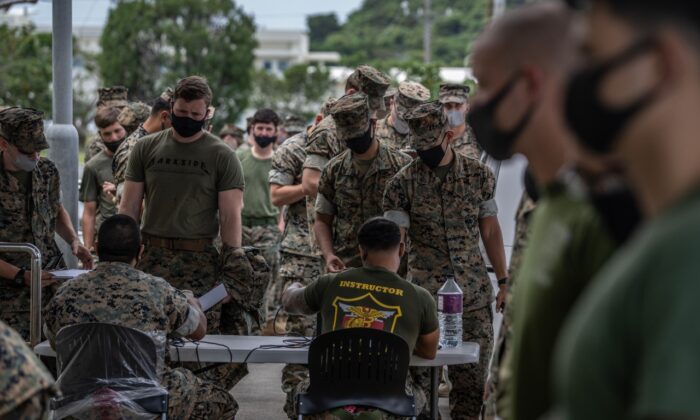 ‘Military Leadership Is Failing Us’: Unvaccinated Marine Officer Who Was Denied Religious Exemption Speaks Out

An unvaccinated Marine Corps officer is sounding the alarm, saying that the denial of religious exemptions for the Defense Department’s (DoD) COVID-19 vaccine mandate which went into effect in August is a direct assault on the rights of service-members everywhere, and may be part of a larger effort to purge the military of conservative-leaning Christians.

The Epoch Times spoke to Major Lewis Paul (a pseudonym), who has served in the Marine Corps for almost 20 years. Paul spoke to the publication on the condition of anonymity, fearing reprisals. He explained the process of seeking a religious accommodation, indicating that each request travels up the chain of command, with the final decision made at Headquarters Marine Corps. That decision, he said, is based on a recommendation from the three-member Religious Accommodation Review Board which then forwards requests to Lt. Gen. David Ottignon, the Deputy Commandant of Manpower and Reserve Affairs, for decision and signature.

While a response is supposed to be given within 30 days, Paul said he did not get his response from headquarters until nearly 100 days later. Denials can be appealed directly to the Commandant of the Marine Corps, which is where Paul finds himself today. If his appeal is denied, he will have 30 days to comply by taking the vaccine or face punitive separation from the Marine Corps.

Paul’s religious accommodation request was accompanied by a negative endorsement from his leadership that essentially said, “do not recommend,” he said. Given the sensitivity that normally accompanies religious accommodation requests, the appropriate endorsement, he said, should have been a neutral endorsement, one that would have simply allowed his request to be considered based on its individual merits. Paul also noted that after enduring what he described as an interrogation from the chaplain, he had to defend his accommodation before each Commander who told him that he should comply with mandate, as there was no chance a request would be approved.

“The chain of command has no business making a decision on what is or what is not a sincere religious belief, but they chose to add their own negative endorsement—and I would submit this is nothing more than a rush to show how loyal they are to the current administration, rather than advocate for their Marines,” Paul said.

The process has left him feeling “betrayed,” he added.

Mike Berry, whose legal work at First Liberty Institute helped secure a preliminary injunction in early January that stopped the DoD from taking any action against a group of Navy SEALs who have religious objections to the vaccine mandate, told The Epoch Times that “betrayal is a universal feeling” experienced by many in similar situations across all branches of military service.

“[Service members] feel like [military and civilian] leadership has let them down after many years—in some cases, decades—of honorable and faithful service,” Berry said. “Many are feeling ignored or even spat upon.”

“All in the name of political agenda and political expediency, people of faith who are serving in uniform are being told that the only people that matter are those who chose to get the vaccine or those who don’t hold to sincerely held religious beliefs that would prevent them from getting the vaccine,” he said.

He noted that his refusal letter was a word-for-word match with the statement every Marine receives when they are denied accommodation. The letter from the Deputy Commandant for Manpower and Reserve Affairs said the “decision must be consistent with mission accomplishment, including consideration of potential medical risks to other persons comprising the unit or organizations, [and] immunizations are a critical component of individual and unit readiness.”

It also noted there was “no less-restrictive way of accommodating” the request in a way that “ensures military readiness and the preservation of the health of the force.”

When Paul sought additional documentation about the decision, he was only given additional that appeared to be template documents that only left space for the decision-maker’s initials, with no space for comments.

Paul finds it highly unlikely that the Marine Corps reviewed his case on its individual merits, as required by law in the Religious Freedom Restoration Act of 1993.

Thousands of Marines face dismissal for their continued refusal to get the shot. The Marines had required all members to get the jab or apply for an exemption by November 2021. To date, only two Marine Corps Religious Accommodation requests have been approved, according to Jan. 13 statement from the Marine Corps, making the Marines the first military branch to grant religious exemptions.

As of Jan. 12, 3,350 requests have been made with 3,212 processed, the Marines said. Meanwhile, 351 Marines have been discharged for refusing to take the vaccine.

Before the mandate went into effect in August, Paul said the Marine Corps took steps midsummer to rewrite the religious accommodation order, pointing to Marine Corps Order 1730.9, which as signed on July 12.

The latest July order, he said, added language that specifically addressed immunizations to a different degree than the previous order. “It basically suggests that everything can be considered for religious accommodation, except immunizations, and that previously wasn’t the case,” he explained. It also appears that the previous version of the order has been “scrubbed from the web.”

“There were many steps taken to change the process and ensure that the only answer Marines would ever receive would be a declined religious accommodation,” he said.

Paul realizes he is fighting an uphill battle with a lot to lose. Ultimately, officers who refuse the vaccine will be removed from the Marine Corps in one of two ways. The first would include accepting non-judicial punishment and separation without court-martial, via a board of inquiry. He considers this option “an admission of guilt of wrongdoing.”

The other option would be to refuse non-judicial punishment and face court-martial, which has the potential to result in a federal conviction. “Not only would my good name be besmirched with this option,” Paul said, “I would be potentially barred from fundamental rights and the ability to participate in the very society I have defended my entire adult life.”

After nearly two decades of service in the Marine Corps, he said, “My legacy could end in a federal criminal conviction, which should give everyone a great deal of pause, considering that I have done nothing other than stand firm for truth, remained firm in my religious convictions, and upheld my obligation to defend the constitution.”

Paul’s legacy extends beyond his own service. Both he and his spouse have had a family member serve in every major conflict since the Revolutionary War—a span of over 230 years. “We have bled and died for this country,” he said. “This betrayal would leave a lasting bitter taste in our family and would no doubt influence our future families’ decisions whether to volunteer or not.”

Leadership Failing Those Who Gave All

Every person who joins the military takes an oath to “support and defend the Constitution of the United States against all enemies, foreign and domestic,” Paul said, adding that it’s an oath that’s taken very seriously, because every service member understands it could include “supporting and defending the Constitution up to, and including, the cost of one’s own life.”

He has witnessed “America’s finest” give up their lives, making the ultimate sacrifice to defend their oath. “I’ve had to bury them in front of their families, [and] I’ve had to pick up my friends body parts.”

While each of these incidents sadden him, he is proud that so many have protected and defended America’s freedoms. “But who defends our rights as military members?” he asked. “Civilian and military leadership is failing us.”

The fundamental freedom to practice his religion is being taken away, he said.

“Where my faith was always very aligned with my service, it’s the Marine Corps that has shifted its position and has decided that that faith no longer matters in favor of political expediency.”

A large part of the nation’s military readiness depends on “an all-volunteer military, the steady supply of volunteers that’s ready to fight on behalf of our nation,” he said. By not allowing religious accommodation, he said “what this is doing is telling a huge cross section of America, that is, people of faith, people hold to sincere religious beliefs, that you are not welcome in the military.”

To that end, Paul said the Marine Corps’ decisions have little to do with protecting service members from the virus. “Instead, I would caution people that the vaccine is being used as a mechanism to politically purge the ranks,” he said.

Many of his fellow Marines are leaving the Corps. “There are many who saw this coming and chose to retire or end their active service quietly,” he said. “Moving ahead, Americans will be far less inclined to pick up arms and join the military in the future.”

According to Paul, the military is facing a serious recruitment and retention problem within the ranks that relates to poor leadership, failures in Afghanistan, and an unconstitutional order to vaccinate. He noted “this will go down as one of the most reckless decisions ever made, as we are seeing our personnel numbers purposely depleted in the face potential great-power conflicts.”

For Paul, the issue goes much deeper than a purging of the ranks. In the years ahead, he said it could take a more sinister turn. “What happens when this new military that’s hypercompliant is now given another unlawful order—and this time it’s not a vaccination?” he asked. “We have long prided ourselves as having a Military that will do the morally right thing in the face of adversity, but this goes away if the moral backbone is purged from the military.”

“Regardless of who is being purged, perhaps the question we should ask ourselves is what is the real cost?” he said. “Military leaders will insist this is about readiness, but there may be long term implications that will reverberate through history.”

The Epoch Times has reached out to the Pentagon for comments.