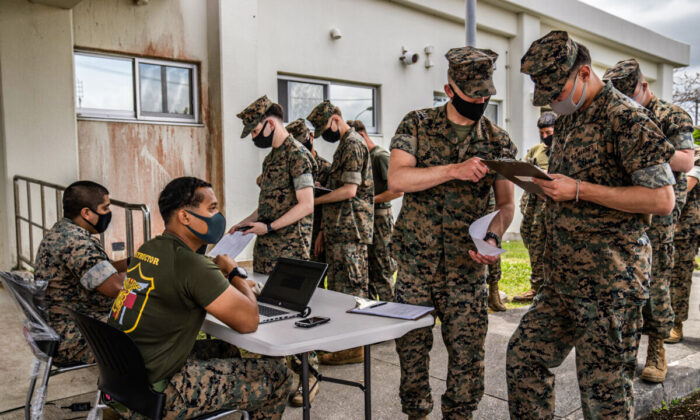 United States Marines register their details as they queue to receive the Moderna COVID-19 vaccine at Camp Hansen on April 28, 2021 in Kin, Japan. (Carl Court/Getty Images)
By Zachary Stieber

The Marine Corps is the first U.S. military branch to grant religious exemptions to the military’s COVID-19 vaccine mandate, nearly two months after the vaccination deadline for active-duty Marines.

The Marines approved two requests for religious accommodation from the mandate, the branch said in a statement on Thursday.

Defense Secretary Lloyd Austin announced the mandate in August 2021, but every branch had resisted granting religious accommodations, sparking lawsuits and allegations that the military was violating federal law by discriminating against religious troops.

The lack of approvals prompted a federal judge earlier this month to block the mandate for a group of Navy personnel, with the judge finding the record “overwhelmingly demonstrates that the Navy’s religious accommodation process is an exercise in futility.”

“I think the Marines saw the opinion, saw them get just completely get ripped a new one, admonished, reprimanded judicially … and they saw that, now they’re reacting to it; they’re trying to correct it after the fact,” he said.

A Marines spokesman declined to share details of the approved exemptions, telling The Epoch Times that the branch was “hamstrung by privacy considerations.”

“All I confirm that we had two approved religious accommodations,” he said.

Requests for religious accommodations are “meticulously reviewed” by multiple superiors, the spokesman added in an emailed statement. If they all clear the request it reaches the deputy commandant who decides whether to approve or deny it.

No other military branch has granted any religious exemptions yet, according to data published this week and answers from spokespersons for the branches.

The Navy has received over 3,700 requests for religious accommodation from the mandate and approved zero. The Army has not approved any of the over 2,100 religious exemption requests. The Air Force has rejected over 2,300 requests, with another 2,158 pending.

Authorities have defended the lack of approvals, which contrast with the thousands of medical exemptions that have been granted.

“We understand it’s weighing on your minds, and we are working through these as expeditiously as we can … to make sure we’re looking at each one of them on a case-by-case basis, so that we are following and giving you due process as we go through that review,” Gen. Arnold Bunch Jr., commander of the Air Force Materiel Command, told troops in a virtual town hall last week.

Even troops who end up receiving a religious exemption will be deemed nondeployable unless they also receive a medical exemption, according to court records and lawyers representing troops seeking accommodations.

And troops with pending accommodation requests have faced repercussions, including one case where a Navy SEAL was barred from traveling to receive treatment for a deployment-related traumatic brain injury.

The military’s deadlines for active-duty and reserve troops to get vaccinated passed weeks or months ago, except for a deadline for Army reservists and National Guard personnel.

Branches have been increasing punitive measures against troops with pending, rejected, or no accommodation requests who remain unvaccinated, including separating them from the forces. Two-hundred and eighty nine Marines have now been separated with the vaccine refusal discharge code, the branch said. The Air Force has kicked out 87 active-duty Airmen and the Navy has booted 20 service members.

The Army says it has not kicked out any soldiers for not adhering to the mandate. Army officials plan to issue before the end of January more specific guidance to commanders regarding the mandatory initiation of separation for such soldiers.

The Coast Guard, the only branch outside the purview of the Department of Defense, did not respond to requests for comment.

Correction: A previous version of this article had a higher count of Marines who were kicked out for refusing vaccines. The Marines later said it reported the wrong number.