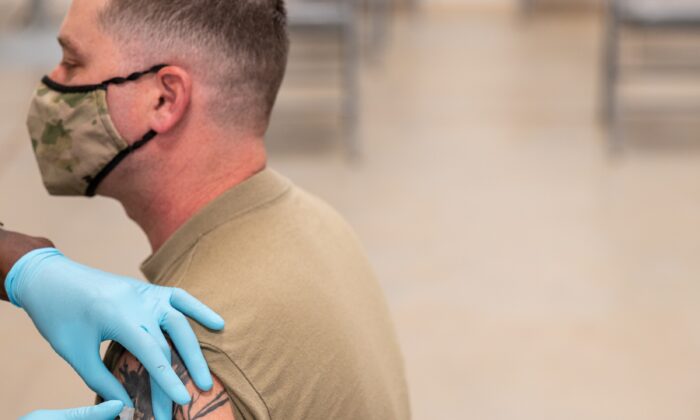 On Aug. 15, a group of 42 chaplains seeking to challenge the Pentagon’s vaccine mandate on the grounds of religious freedom filed a lawsuit in the District Court for the Eastern District of Virginia. On Sept. 28, their case was heard by Senior U.S. District Judge Anthony J. Trenga. Eight weeks later, on Nov. 23, Trenga dismissed the case, citing a lack of jurisdiction.

Chaplain (Lt.) Jonathan Shour enlisted in the Air Force in 2005, and after serving six years, he elected to go back to school and become a chaplain. He reentered the military in 2013 as a chaplain, first in the reserve and then on active duty. In 2021, he transitioned from the Air Force to the Navy.

His entire time as a Navy chaplain has been consumed by “mandate madness since day one,” Shour told The Epoch Times.

“The judge cited a lack of jurisdiction in order to dismiss our case, essentially stating we have not exhausted all administrative remedies,” he said.

But he considered this the wrong decision because while he admits there are some service members who are still awaiting responses to their appeals, there’s the unique case of Army Chaplain (Cpt.) Andy Hirko to examine, for example.

As previously reported by The Epoch Times, Hirko is one of the plaintiffs in the suit.

“I’m very disappointed,” Hirko said in response to the decision.

Prior to joining the Army in January 2021, Hirko served as a pastor in Florida for nearly 20 years. At 41 years old, he committed to serving the country as a military chaplain and is “very thankful to have served many soldiers since joining [the Army].”

For Hirko, his circumstances are unique. Administrative remedies for relief no longer exist.

“We believe there was an error in the ruling for not having jurisdiction because I have exhausted all my means of relief,” he said. “By definition of class action, if one person in the class has a particular characteristic, then they all do.

“Nine of the 12 chaplains have either not received a response to their original accommodation request or have not received word on their appeal.”

Two chaplains who have had their religious accommodation requests refused now face a separation board, having served more than six years in the Army, he noted.

But since Hirko has less than six years of service, he won’t face a three-person board to determine his fate.

“I have not been in the Army long enough, so I won’t be given that opportunity,” he said.

“And while all of us await our future in the Army to be determined, there is no injunction for the Army to protect [us from] being separated at this time.

“I haven’t gotten my date, but I’ve been told by my unit that they’re going to start the separation process.”

To date, Hirko has only been “counseled over the issue.”

In a ‘Lion’s Den’ but Hope Remains

“We’re claiming that our First Amendment rights are being violated—not just ours but those of tens of thousands of people across the Department of Defense,” Shour said.

“An administrative board can reinstate, and they can give back pay, but they can never recoup the violation of a First Amendment right, which causes irreparable harm as soon as it happens—and that’s why the judge should have taken our case and not dismissed it.”

Hirko made it clear that he and the other chaplains aren’t finished.

“As I and others wait in limbo, I want to convey that the other 41 chaplains and I are not giving up the fight,” he said. “We still believe that religious freedom is one of the reasons why we signed up to serve, and we’re going to continue on and pursue an appeal.

“While people may hear that our case was dismissed, it doesn’t mean we’ve done anything wrong,” Shour said.

Speaking on behalf of the other chaplains in the case, he said, “It seems that there was a bad decision, and each of us will continue to fight.

“Our case has been described as being in the lion’s den of districts. If it is in the lion’s den, as chaplains, we’d like to point out that a lot of great things have happened in lion’s dens throughout biblical history.

“We remain hopeful for a miraculous victory, even although this initial dismissal was a hard pill to swallow.”