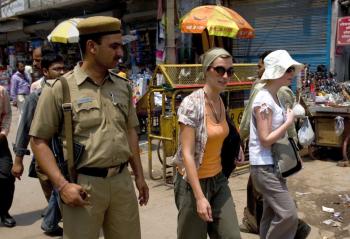 Foreign tourists are watched by an Indian policeman as they walk along a street in New Delhi on May 2. Thousands of Indian police and paramilitary troops are guarding New Delhi's markets and shopping centers after a series of warnings from foreign embassies of an imminent militant attack. (Manpreet Romana/AFP/Getty Images)
World

By Jasper Fakkert
Print
India's capital New Delhi has been put on high alert following warnings of militant attacks. The U.S. Embassy in India said on it's website that there are increased indications that “terrorists are planning imminent attacks in New Delhi,” and called on U.S. citizens to “maintain a high level of vigilance.”

The British, Canadian, Australian, and other Western embassies have also issued alerts. Thousands of additional police and paramilitary soldiers were deployed near busy locations in the capital at locations such as metro stations, markets, and commercial shopping districts. Indian media reported a decrease in the number of people on the streets and markets in New Delhi.

The security threat comes a day before the announcement of the verdict for the only captured alleged gunman in the 2008 terrorist attack in Mumbai that killed 166 people.