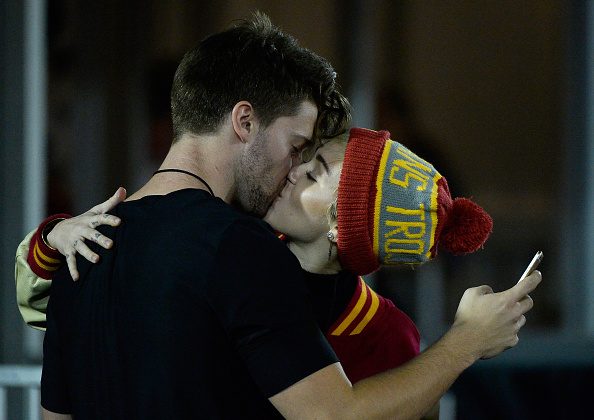 Cyrus recently celebrated her 22nd birthday with Schwarzenegger, an actor and model who is the son of Arnold Schwarzenegger and Maria Shriver, on Saturday.

Gossip site Celeb Dirty Laundry, citing its sources, said the two are getting “engaged and married.”

“Sources are reporting that Miley and Patrick are already engaged – and Miley held a dinner at her house with her parents and siblings so that she and Patrick could share the good news with her family and get their blessings,” it said. ” Patrick’s mother Maria Shriver is on board as well and supports the couple. Star reveals that Miley and Patrick attended an event with Shriver on November 12th, the screening of ‘Still Alice’ – a film that Patrick’s mother produced.”

The two have been dating since October.

Meanwhile, a source told Star Magazine: “Miley has slowed down the partying. Patrick’s very healthy – so that has definitely rubbed off on her. Everyone is so excited for them. Their families think they are the cutest couple.”

During her birthday, she had a crudely designed mechanical bull.

“Miley and other guests took turns riding on it,” a source told Us magazine. “There was also a photo booth where you got on a bed. And there were lots of psychedelic decorations and black light.”

A source also told Us that Schwarzenegger and Cyrus “have been friends for a long time” and “they have a ton of common friends so they have run in the same circles for years.”

“Miley and Patrick were hugging and dancing together,” the source also said, and added that he “blended in well and was with her much of the time.”