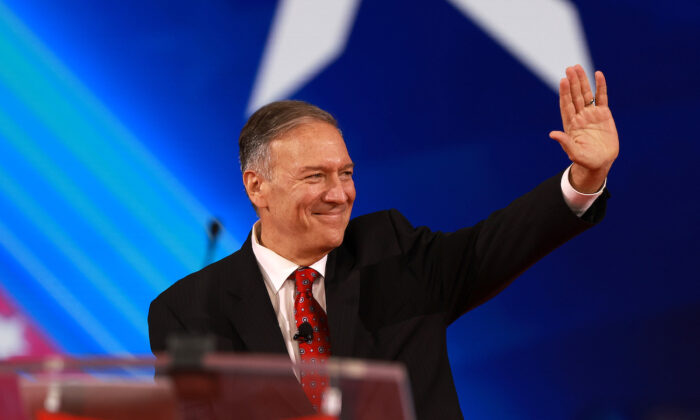 Former Secretary of State Mike Pompeo told a crowd in Illinois this week that he is preparing to run for president during the 2024 elections.

“We’ve got a team in Iowa, a team in New Hampshire and South Carolina. And that’s not random. We are doing the things one would do to get ready,” Pompeo told 1,100 people during a Chicago event on Tuesday, according to a Politico reporter.

“Unlike others, if I go down an escalator, no one will notice,” Pompeo joked, referring to former President Donald Trump’s announcement in 2015 that he was running.

“We are trying to figure out if that is the next place for us to serve,” he also said during the event. “If we conclude it is, we’ll go make the case to the American people of why that is. And in the end, the American people, I pray, will make a good decision about who’s going to be their next leader.”

Pompeo, a former secretary of state and director of the CIA under Trump, made the comments while speaking at the Navy SEAL Foundation Midwest Evening of Tribute on Tuesday evening.

It’s been no secret that Pompeo may be planning to run for president in 2024. In August, the former GOP congressman said he would run for the nation’s highest office “no matter who decides to get in,” including his former boss.

“We’re going to make our decision based on if we think this is the right place for us to serve,” Pompeo said at a Faith and Freedom barbeque in late August. “If I come to believe I ought to become president, that I have something to offer the American people, I will run no matter who all decides to get in and who else decides not to get in the race.”

Pompeo has not made an official announcement on whether he will run. Trump and other top Republican candidates similarly have not said whether they will run, although Trump has strongly hinted that he would in several public speaking engagements.

In a July interview with The Hill, Trump indicated that it’s not a question of whether he will run but rather a question of when he’ll make the announcement. That came weeks before the FBI raided the former president’s Mar-a-Lago on Aug. 8, which Pompeo condemned last month.

“I would say my big decision will be whether I go before or after,” he said. “You understand what that means?”

Trump also indicated that the announcement would come around the 2022 midterm elections. “Do I go before or after? That will be my big decision,” he said.