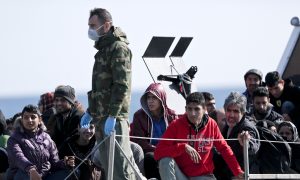 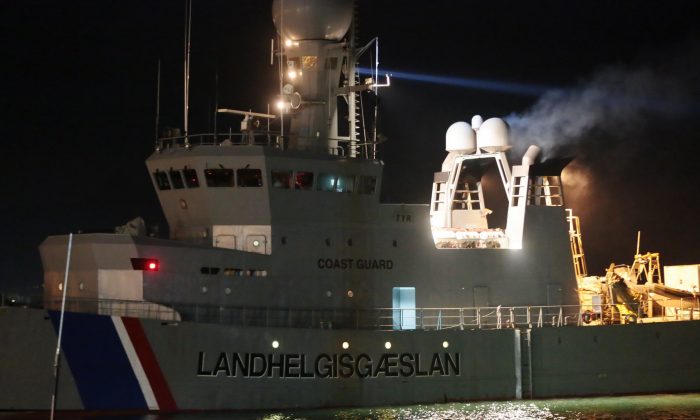 The Icelandic Coast Guard tows the cargo ship Ezadeen, carrying hundreds of migrants, as that arrives at the southern Italian port of Corigliano, Italy, Saturday, Jan. 3, 2015. The cargo ship was stopped with about 450 migrants aboard after smugglers sent it speeding toward the coast in rough seas with no one in command. Italian authorities lowered engineers and electricians onto the wave-tossed ship by helicopter to secure it, and the Icelandic Coast Guard towed it to the Italian port of Corigliano late Friday night. Smugglers who bring migrants to Europe by sea appear to have adopted a new, more dangerous tactic: cramming hundreds of them onto a large cargo ship, setting it on an automated course to crash into the coast, and then abandoning the helm. (AP Photo/Antonino D'Urso)
Europe

ROME—Syrian migrants told Italian investigators Saturday that their smugglers wore hoods to avoid identification before putting their cargo ship on automatic pilot and abandoning it in choppy Mediterranean waters.

Fleeing their homeland’s war, 365 Syrians disembarked hours earlier from the Ezadeen at Corigliano Calabro, in Calabria, the end of a three-day voyage from Turkey.

The cargo vessel had been towed to port by an Icelandic coast guard ship. Italian coast guard officials were themselves lowered by helicopter in strong winds onto the unmanned bridge to take control after a migrant told them Thursday they had been abandoned.

Before the ship’s arrival, coast guard officials estimated there were between 400 and 450 passengers.

But a local Prefect’s Office official, Emanuela Greco, said the actual count was 359: 255 men, 42 women and 62 children, eight of them unaccompanied.

She told The Associated Press police questioned and checked the documents of each arrival, but found no suspected smugglers mingled among them. The Syrians were taken to shelters around Italy where they can apply for asylum.

Sometimes, smugglers have tried to blend in with the masses of migrants who step onto Italian soil after sea rescues.

Cosenza Police Chief Luigi Liguori told reporters that migrants said the smugglers were hooded whenever they saw them.

Authorities said the migrants recounted that they boarded the Sierra-Leone-flagged Ezadeen on Dec. 31 in Turkey after a flight from Lebanon, a country which borders Syria.

It was unclear which Turkish port was the departure point. The Ezadeen’s data recorder might reveal its exact route. Castrovillari Prosecutor Franco Giacomantonio told Sky TG24TV authorities would examine the sequestered recorder.

Italian authorities are worried that smugglers might have a new and particularly dangerous strategy. The Ezadeen was the second cargo ship in two days to be abandoned on automatic pilot, programmed to steam ahead and crash into Italy’s southern coast with hundreds of helpless passengers.

It’s possible that human traffickers might have calculated that what each migrant pays for the risky, uncomfortable voyage makes it worth ditching old cargo ships in a bid to escape capture.

Describing those who wearily disembarked from the Ezadeen, Greco said: “These are people of a certain economic means. They were well dressed.”

The Ezadeen was formerly used to transport animals, she noted. “These poor people were crowded together, down in the ship, in the dark,” because at some point the electricity went out, she said.

“The children never cried” after disembarking, Greco recalled. “I had the impression all the people were very dignified, with a certain pride.”

From The Associated Press. Annalisa Camilli contributed to this report.