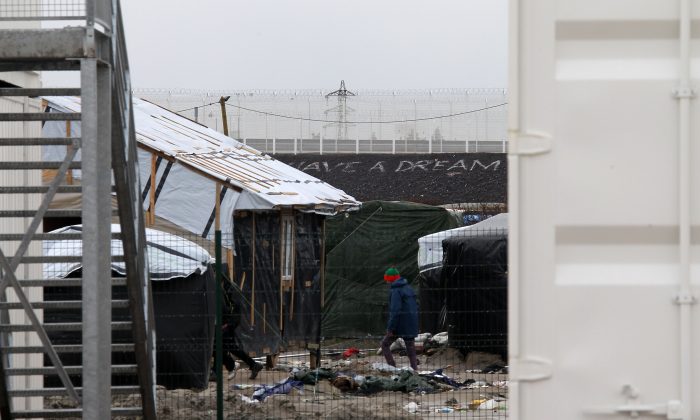 A migrant walks at the entrance of the Calais refugee camp in Calais, northern France, on Jan. 11, 2016. Approximately 130 containers will be converted to shelters to accommodate as many as 1,500 migrants who are expected to move in on Monday. (AP Photo/Michel Spingler)
Europe

Migrants in Squalid Camps in France Get Housing Upgrade

CALAIS, France—French officials took steps on Monday to improve the lot of thousands of migrants living in dreadful conditions in northern France, setting up containers with bunk beds in Calais, the largest camp, and approving plans to relocate another squalid camp outside nearby Dunkirk.

Migrants throng by the thousands to Calais and Dunkirk in a bid to sneak into Britain. But until Monday, authorities had done little to make life easier for migrants—from Syria, Iraq, Afghanistan, Eritrea and elsewhere—because France and Britain are trying to dissuade them from coming.

A group of 140 people moved into the white containers with bunk beds in the Calais camp. The containers can house 1,500, with children and families getting priority.

In Grande-Synthe, the mayor’s office approved relocating a camp mired in mud to another location, after weeks of discussions among local authorities and Doctors Without Borders, which led the effort. The new camp will open in four weeks, according to the prefecture of the Nord region.

‘Is This Really Europe?’: Refugees in Calais Speak of Desperate Conditions

Up to 2,500 people stay in the Grande-Synthe camp, known as a haven for smugglers.

Both camps ballooned with the influx of migrants to Europe, and the Calais camp has evolved into a slum with shops, mosques and a church between the tarps and tents. Up to 6,000 people were staying there in the fall, though the number has decreased recently.

Authorities are cautious not to allow housing to attract more migrants. The goal is to reduce the Calais migrant population to 2,000. Security has been tightened at the port and Channel tunnel.

“I think it’s very clear from now on that it’s impossible to get to the U.K. from Calais,” said Nicolas Pauliac of the Pas de Calais prefecture.

Not all migrants see the shiny new containers as a boon.

“To stay here or move to the containers is the same for me,” said Ahmed Alhamad, a Syrian. “I want to seek asylum in Britain.”