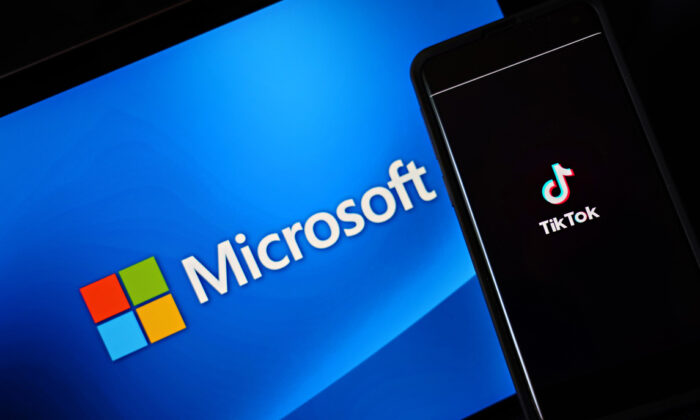 In this photo illustration, a mobile phone featuring the TikTok app is displayed next to the Microsoft logo on Aug. 3, 2020 in New York City. (Cindy Ord/Getty Images)
National Security

The future of TikTok is in the crosshairs as the app faces a September ban from the United States unless its parent company sells it to Microsoft or another U.S. company. But Microsoft’s decades-long ties to Beijing could muddy the waters.

The video-sharing app, which is wildly popular among American teens, has come under bipartisan scrutiny over national security and privacy concerns in relation to its ownership. TikTok, which was acquired by Beijing-based ByteDance Technology Co. in 2017, is estimated to have tens of millions of active users in the United States.

The crux of the concern is that under a 2017 national intelligence law, Chinese companies are required to provide their data to the ruling Communist Party. While some experts are optimistic that a Microsoft purchase will bring an end to alleged backdoor data mining, others say the company’s own extensive ties with Beijing are a cause for concern.

The Epoch Times recently reported that more than 130 employees at ByteDance are part of a Chinese Community Party (CCP) committee embedded in the company. Many of the employees work in management positions, according to internal documents. ByteDance, founded in March 2012, set up its Party committee in October 2014.

“It is no secret that Microsoft has had a presence in China since 1992,” Watnik told The Epoch Times. “Microsoft enjoys special status in China as the only Western company China permits to operate a search engine and a social media company within its borders: Bing and LinkedIn.”

Under Beijing’s “great firewall” policy, both these companies have been censored inside China. Zhang Yiming, the founder of Bytedance, also used to work for Microsoft and has an estimated net worth of more than $16 billion.

As Microsoft’s own website touts, the company’s “most complete subsidiary and largest R&D center outside the United States is in China.”

Microsoft’s website also boasts that in early 2015, the company was recognized by Fast Company magazine as one of the “World’s Top 10 Most Innovative of 2015 Companies in China.” It was also included as one of the “Companies Remaking the Chinese Economy.”

“By operating in China, Microsoft thus makes a Faustian bargain: It gets billions in profits and market share in the most populous country in the world, but in return it must cede to Beijing’s demands for government censorship, and limits on free expression and user privacy in connection with its online platforms,” Watnik said.

“On what level can an American company who enters into a Faustian bargain of this sort be trusted? Can a United States company that has already engaged, and continues to engage, in the Faustian bargain be trusted to cease such activity?”

Other major companies such as Google, meanwhile, have exited China in protest over government censorship and alleged hacking by the regime. Given Microsoft’s extensive presence inside China, Watnik said he believes the CCP “has the ability to exert leverage over Microsoft by implementing policies and regulations that could reward or punish Microsoft’s business operations in China.”

Microsoft CEO Satya Nadella has attempted to quash concerns, saying in an Aug. 2 statement that the company “would ensure that all private data of TikTok’s American users is transferred to and remains in the United States.”

TikTok also has repeatedly claimed that it stores all U.S. user data in the United States with backup redundancy in Singapore.

There are also critics of a Microsoft purchase in the higher levels of the administration. White House adviser Peter Navarro told CNN: “Whose software does the People’s Liberation Army in China run on? Microsoft. The Chinese Communist Party, whose software do they use to do all the things they do? It’s Microsoft.

If Microsoft wants the TikTok deal to go through, executives might want to consider divesting from China, Navarro said.

According to the research firm, the app received the most downloads for any app ever in the first quarter of this year when it accumulated “more than 315 million installs.”

Blair Brandt, a Republican strategist and political adviser, said the fact that Microsoft’s software is being used by the CCP “certainly makes you second-guess things.”

“We cannot assume, at least on face value alone, that their ownership of TikTok will naturally prevent the privacy violations we were originally concerned about,” he told The Epoch Times. “The devil will be in the details.

“Selling TikTok to an American firm is a great compromise, but we do have to look at what buyers provide the right track record and level of integrity.”

All sales of Western technology and tech manufacturing to China should be banned to protect national security, according to Casey Fleming, chairman and CEO of intelligence and security strategy firm BlackOps Partners.

He believes there will be no change to Beijing’s espionage practices even if it agrees to Microsoft’s acquisition.

“Again, all technology used or created by the CCP is to keep the communist regime in power,” he told The Epoch Times. “Think total control.”

By law, Chinese companies are required to set up Communist Party units within their offices to ensure that business policies and employees toe the Party line.

A spokesperson for Microsoft told The Epoch Times via email that the company “doesn’t have anything to share,” in response to a written query.

A TikTok spokesperson didn’t immediately respond to a request for comment.

Rob Behnke, CEO at Halborn, a cybersecurity firm working with emerging technologies, told The Epoch Times that at this point “it’s not even speculation,” that TikTok sends U.S. data to China.

“So a change in management will change this and hopefully the backdoors will be closed should this end up actually happening,” he said. “This is more so about data privacy than security, though.”

A successful acquisition would just mean that it would be a U.S. company spying on Americans, rather than the Chinese, Behnke said. He called the recent U.S. rhetoric around the app “purely a political play.”

The concerns around TikTok come amid broader anxiety over forced technology transfers from U.S. companies to Chinese authorities and intellectual property theft.

China has built up its technology largely on what it has stolen from the West, with costs of intellectual property theft amounting to an estimated $600 billion a year.

Trump has described TikTok’s presence in the United States as a landlord–tenant relationship and that his administration “holds all the cards.”

Mark Grabowski, an associate professor specializing in cyber law and digital ethics at Adelphi University, said it would be a relief to know that under a Microsoft purchase the Chinese regime would at least no longer be able to directly exploit TikTok to spy on Americans.

“But I’m not sure Microsoft is the answer,” he told The Epoch Times. “They’re part of the so-called Frightful Five or group of American tech giants that have accrued a tremendous amount of power.

“I also worry whether Microsoft will impose censorship on TikTok. They’ve included speech restrictions in their Terms of Service for other products, such as Office 365, that go well beyond what’s required by law.”

While Microsoft is believed to be one of the main players, Twitter also has expressed interest in an acquisition.

Robert J. Bunker, adjunct research professor at the Strategic Studies Institute of the U.S. Army War College, said the TikTok saga is part of a wider issue, a battle to decide the landscape of the internet.

“I think the United States should ‘fight’ for the future of a liberal-democratic influenced global internet by both engaging and containing China in this regard,” he told The Epoch Times. “Hence Microsoft and other U.S. companies should purchase TikTok, Zoom, and other potentially CCP-linked business entities.”