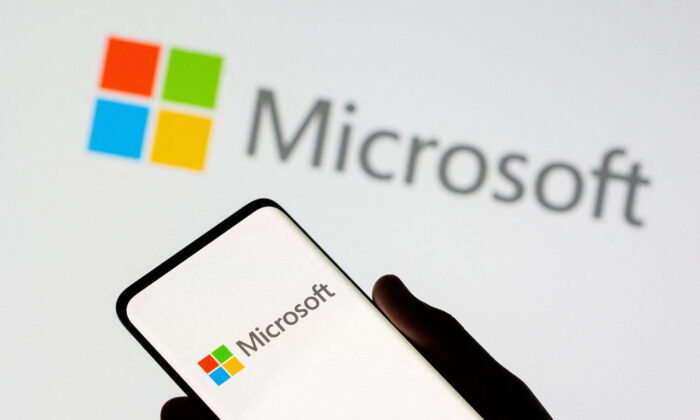 A phone is seen in front of a Microsoft logo displayed in this illustration taken on July 26, 2021. (Dado Ruvic/Illustration/Reuters)
By Katabella Roberts

Microsoft is investing billions in OpenAI, the creator of the artificial intelligence system ChatGPT, the tech giant has confirmed.

In a blog post on Jan. 23, the company announced the third phase of its “long-term partnership with OpenAI” through a multiyear, multibillion-dollar investment aimed at accelerating “AI breakthroughs to ensure these benefits are broadly shared with the world.”

Microsoft previously made investments in OpenAI in 2019 and 2021, the company said.

According to the tech giant —which stopped short of revealing the exact amount it was investing in the AI research and deployment company—the funding will go toward the development and deployment of specialized supercomputing systems to “accelerate OpenAI’s groundbreaking independent AI research.”

The company will also deploy OpenAI’s models across its consumer and enterprise products and “introduce new categories of digital experiences” built on OpenAI’s technology.

Microsoft is the exclusive provider of cloud computing services to OpenAI through its Azure platform.

According to the blog post, Azure will power all OpenAI workloads across research, products, and API services.

Developing AI That Is ‘Safe, Useful, and Powerful’

“We formed our partnership with OpenAI around a shared ambition to responsibly advance cutting-edge AI research and democratize AI as a new technology platform,” said Satya Nadella, chairman and CEO of Microsoft. “In this next phase of our partnership, developers and organizations across industries will have access to the best AI infrastructure, models, and toolchain with Azure to build and run their applications.”

In a separate blog post published on Monday, OpenAI said that Microsoft’s multiyear investment will help the company “continue our independent research and develop AI that is increasingly safe, useful, and powerful.”

ChatGPT is a free-to-use artificial intelligence chatbot that can produce human-like speech in a conversational way. Specifically, it can answer questions, write fiction and non-fiction content when prompted, perform calculations, and translate text from one language to another.

Most recently, the chatbot was able to pass a graduate-level business examination at the University of Pennsylvania’s Wharton School, according to a new research paper by Christian Terwiesch, a professor at the school.

The software, which is trained using reinforcement learning from human feedback (RLHF), initially debuted in November last year and quickly went viral, crossing the mark of one million users within just five days.

However, some experts have raised concerns that the chatbot could be used in negative ways, including helping students cheat on their exams and homework.

The Los Angeles Unified School District was one of the first districts to block ChatGPT in December in an effort to “protect academic honesty.”

Earlier this month, the New York City Department of Education blocked ChatGPT service access on its networks and devices, citing concerns over negative impacts on student learning and the safety and accuracy of its content.

OpenAI acknowledges that ChatGPT is not always correct.

Addressing concerns from schools regarding the chatbot, OpenAI CEO Sam Altman said during an interview with StrictlyVC’s Connie Loizos earlier this month that “generative text is something we all need to adapt to.

“We adapted to calculators and changed what we tested for in math class, I imagine. This is a more extreme version of that, no doubt, but also the benefits of it are more extreme, as well,” Altman said.

The CEO also pledged to develop techniques to help prevent plagiarism, but warned that such techniques cannot completely ensure that it won’t happen.

“We’re going to try and do some things in the short term,” Altman said. “There may be ways we can help teachers be a little more likely to detect output of a GPT-like system. But honestly, a determined person will get around them.”