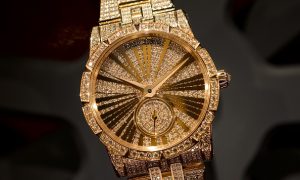 Microscopic Sculptures Are Hidden in These Luxury Watches

A beautifully crafted time piece is a work of art in its own right, but there’s more to what meets the eye when it comes to a Greubel Forsey watch.

When you look through the tiny glass opening on the opposite side of the crown, there is a whimsical image. But it’s not just an image—it’s a microscopic sculpture.

Just because you cannot see something with the naked eye, does not mean it does not exist!
— Willard Wigan, sculptor

These microscopic sculptures are the works of Willard Wigan, a self-taught sculptor. Wigan began sculpting when he was five years old, when he constructed houses for ants because he believed that they needed a place in which to live. It is in this world of fantasy that he found refuge from academic failure.

“At school I suffered from a learning difference. I discovered that I was blessed with a talent that permitted me to create small sculptures. I embraced this talent and during the course of my career I took my work to the smallest level possible. It was never an idea as such. It was a camouflage to compensate from my learning difficulties at the time,” said Wigan.

“As a child I was told I was nothing. I want the world to know how small nothing really is. Nothing does not exist. There is always something, no matter how microscopically small. Just because you cannot see something with the naked eye, does not mean it does not exist!”

Wigan’s art has been described as the “Eighth Wonder of the World.”

His sculptures, often set in the eye of a needle or on a pinhead, measure only a few microns and can only be seen with the aide of a microscope. To make these artworks, Wigan puts himself in a meditative state to control his nervous system. In order to reduce the shaking of his hands, he sculpts between two heartbeats. He has one and a half seconds to make each move.

In order to reduce the shaking of his hands, he sculpts between two heartbeats.

It takes Wigan anywhere between six weeks to three months to complete a project. Exceptionally intricate pieces such as the Last Supper, showing Jesus’s final mean with his Twelve Apostles, can take longer.

In 2007, Wigan was appointed the Most Excellent Order of the British Empire by Queen Elizabeth II. These days, Wigan’s expertise is sought after by many micro surgeons, nano technologists, and university professors around the world who consider his work to be a source of inspiration at the intersection of art and science.

His skills were noticed by Greubel Forsey, a Switzerland-based ultra luxury watchmaking company.

Robert Greubel and Stephen Forsey are more than watchmakers—they are inventors. Greubel and Forsey developed the next generation of tourbillon, a complex feature designed to improve the timekeeping of the mechanical watch. Much of the watch’s complex features are displayed on the face, giving the timepieces extremely unique designs. The prices of a Greubel Forsey watch ranges from $500,000 to $1 million dollars.

Wigan’s sculptures are inserted into the watch case, and the viewer is invited to look through an optical system on the side of the watch to see it. In one of the watches, it’s possible to see a golden sailboat the size of a grain of sand. In another, a magic hat with cards spilling out of it.

“I was first contacted via a third party that Robert Greubel wanted to meet with me to discuss the possibility of collaborating with him and his partner, Stephen Forsey. The intention was to create a piece of history that had not previously been undertaken in the world of horology [the science of measuring time],” said Wigan.

We are often told that our watches are masterpieces and these artworks have their place in galleries and not shops.
— Emmanuel Vuille, CEO, Greubel Forsey

“I had never envisaged that my artwork could be placed inside a timepiece, almost a portable gallery. I believed this to be quite revolutionary.”

The collaborative series is titled Art Piece 1 and is part of the Time Art Gallery created by Greubel Forsey. With the goal of reconciling the worlds of high tech watchmaking and contemporary art, the Time Art Gallery produces installations, exhibitions, and other events.

“We are often told that our watches are masterpieces and these artworks have their place in galleries and not shops,” explains Emmanuel Vuille, CEO of Greubel Forsey.

“The process was very challenging, requiring the fusion of many skill sets from the horologists and me as the artist. Significant obstacles had to be overcome. The creation of a specific microscope to view the work. A stable platform to hold the sculpture(s) in place, and then the insertion of all the necessary features of the watch that would make it a bespoke timepiece,” said Wigan.

Art Piece 1 has already been exhibited in several museums and art fairs around the world.