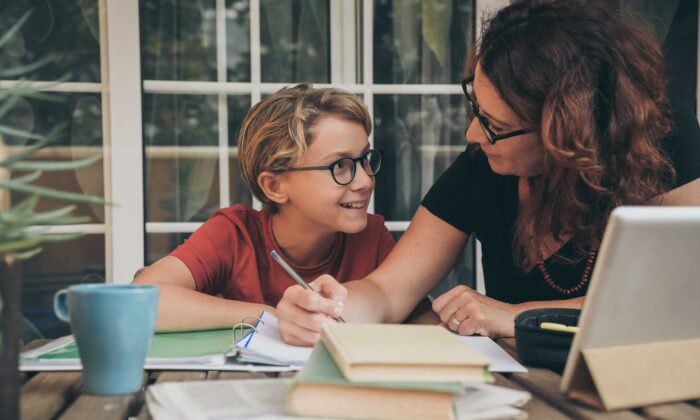 Young student doing homework at home with school books, newspaper, and digital pad helped by his mother.
US News

‘Micro-Schools’ Grow in Popularity Amid Student Exodus From Public Schools

The romantic image of a one-room schoolhouse nestled on the Midwestern prairie has in its modern equivalent today’s micro-school, or “pandemic pod.”

Born amid the COVID-19 pandemic, minimalist by design, their founders say these mini-schools may be small in size but they’re large in curriculum scope, offering individualized instruction in a safe, politics-free environment.

“A micro-school takes the best of different educational formats and brings them together,” said Corey Owens, spokesperson for Prenda micro-schools in Arizona.

“In groups of 5 to 10 students led by a guide, learners engage with a personalized, adaptable curriculum, while getting healthy social interaction and opportunities to learn from one another.”

The first Prenda micro-school opened in Arizona in 2018 with seven students.

Four years later, the organization operates micro-schools in hundreds of communities in a dozen states with more than 3,000 students, 300 guides, and nine school partners that include both charter schools and community groups.

“From our vantage point, the interest in micro-schools transcends politics and geographics,” said Owens, who attributed the phenomenal growth in micro-schools to parents who are looking for an educational setting that “lets their child develop a love of learning.”

“We’ve seen kids that have struggled with bullying, kids that were having trouble keeping up, and kids that excelled but were bored, but thrive in a micro-school environment,” Owens told The Epoch Times.

“The COVID-19 pandemic has, of course, forced lots of families to consider what format works for them and their child in uncertain times, and many of them are turning to micro-schools.”

According to Prenda’s website, a micro-school is a new kind of entity that connects parents with guides who run micro-schools in communities. Prenda’s tuition-free micro-schools for pupils in K–8 are small in size and offer both individualized and group learning in a safe and flexible environment.

Some micro-schools are free, some are tuition-based, and some receive funding through various state tax credits and “empowerment scholarships.”

Many parents are referred to the micro-school that best fits their child’s needs through school “hubs” such as Love Your School, an Arizona-based nonprofit that launched three years ago.

“Depending on what they choose, we walk them through that process,” said spokeswoman Jenny Clark. “All of a sudden we had all these families coming to us initially. I think that there are a variety of issues [driving the trend]—a crazy storm of issues.”

“I think the more parents demand these different options, the more you’ll see public and private schools responding. Parents know what’s best for their kids. I think parents are right: No one knows their child better than them.”

Adamo Education is another Arizona micro-school, which veteran educator Tamara Becker launched in January 2021 during the height of the pandemic, when micro-schools started spreading like “wildfire.”

“Parents are not satisfied” with public education models, Becker told The Epoch Times. “They’re not happy with their kids in classrooms of 25 to 30 [students]. They’re looking for an environment that is safer.”

Adamo Education meets the needs of its students through a combination of traditional, digital, and at-home learning opportunities with certified teachers in grades K–8, she said.

“My program is different in that I only use certified teachers,” Becker said. “The power and the role of the teacher is so key,” as is the goal of helping students “fall in love” with education.

“I really want kids to love learning and to foster that love of learning,” she said. “You can do so much more academically and socially. You know your parents and students much more intimately.”

While the exact number of micro-schools in the United States isn’t currently known, they’re estimated to be in the hundreds. Like their public school counterparts, micro-schools—”alt-schools” in some circles—pride themselves on their individualized, project-based programs of instruction.

Some micro-schools are home-based; others provide stand-alone facilities where learning takes place.

“It’s so much more personalized and such a tighter-knit kind of learning environment. We need to disrupt the educational status quo, and micro-schools are going to be the tools to do that,” Becker said.

At Acton Academy in Laconia, New Hampshire, school administrator Mary MacIntosh launched the micro-school with four students in the fall of 2019 because there was “nothing like it in the area.”

Now in its second year of operation, the micro-school has grown to 20 elementary school age pupils and recently opened a middle school program with seven students.

“I do think COVID was a factor for a lot of people” to choose Acton Academy, MacIntosh told The Epoch Times. “They didn’t want their children to be remote, and it was safer than sending them to [regular] class.”

What parents like most about Acton Academy, she said, is the individualized hands-on instruction.

Students not only learn about math concepts, they also study physics and gravity in project-based workshops, such as Newton’s Toy House.

MacIntosh said the problem with modern public education is that it’s a “gigantic system that just can’t keep up” with the latest innovations in classroom teaching. “It’s just too hard the way it’s set up.”

Which isn’t to say micro-schools don’t have their critics.

The report concluded that alternative forms of education serve to widen the opportunity gap for minority students and “worsen school segregation as well-resourced families will disproportionately benefit.”

“Just like any private school, pandemic pods do not guarantee students or educators the same civil rights protections that are required in public schools. Furthermore, pandemic pods will likely not provide the necessary supports for students with disabilities as required under state and federal legislation,” the NEA stated in its findings.

The NEA also stated that in nonpublic school programs, students aren’t held accountable to state standards of learning, and educators aren’t required to be credentialed.

“Credentialed educators who teach in a pandemic pod have no guaranteed protections or benefits like those secured under contracts working for school districts,” the NEA wrote.

“Private funders have invested approximately $1.7 billion in 2019 in education technology firms. They now see ‘pandemic pods’ as the way of the future, pushing talking points that traditional public schools are outdated.

“The National Education Association (NEA) encourages innovative solutions that will allow students to have in-person instruction and important opportunities for socialization with peers; however, the NEA believes that such cohort-style learning arrangements should be organized, implemented, and monitored under the authority of state and district education agencies.”

It’s the sense of parents being disenfranchised by the public education system, however, that has spurred growth in micro-schools, said Rep. Mark Finchem (R-Ariz.).

“I would say that parents are dissatisfied with public schools. Between material being presented, and the petite tyranny exhibited by ‘leadership’ in public schools, it is clear that political science now rules over real science and medical science,” Finchem told The Epoch Times.