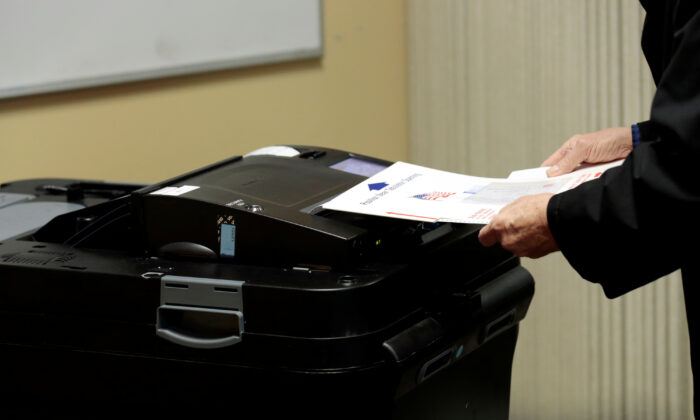 A person places his ballot in a tabulating machine in East Lansing, Mich., in a file photograph. (Jeff Kowalsky/Reuters)
Election Integrity

Police officers in Michigan took custody of a voting machine as the state expands its investigation into what it’s described as possible unauthorized access to election equipment.

The seizure was done pursuant to a search warrant, she said.

“The Township intends to fully cooperate with law enforcement, and the Township attorneys have been in contact with the Michigan State Police regarding this matter. The Township has no further comment at this time,” Knight added.

An investigation was launched earlier this year at the request of Michigan Secretary of State Jocelyn Benson, who said her office received reports that an unnamed third party “was allowed to access vote tabulator components and technology in Roscommon County.”

“Michigan law is clear about the security threats that emerge when anyone gains unauthorized access to our election machines or technology, and I will have no tolerance for those who seek to illegally tamper with our voting equipment,” Benson, a Democrat, said at the time.

Michigan State Police Lieutenant Derrick Carroll confirmed that the probe has expanded beyond Roscommon County, which declined to comment.

“As we found out more information we’ve expanded our area to see if any other places were compromised,” Carroll told Reuters. “We have gone to other regions.”

Carroll told The Epoch Times in an email that the probe has expanded but declined to share any details.

Carroll previously told news outlets that the probe will continue “until we have exhausted all leads,” adding that the possible unauthorized access “did not, in any way, affect the 2020 election.”