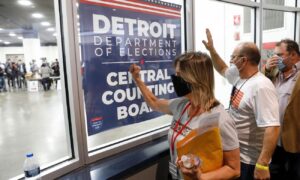 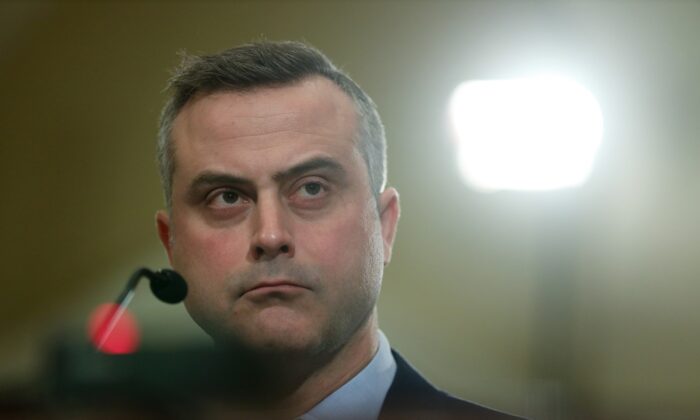 John Poulos, president and CEO of Dominion Voting Systems, testifies during a hearing before the House Administration Committee on Capitol Hill in Washington on Jan. 9, 2020. (Alex Wong/Getty Images)
Viewpoints

We live in a complicated time for democracy, to say the least.

As the world becomes increasingly technological, the less knowledge most of our legislators have with which to make their judgments.

In many cases, they are essentially flying blind.

When it comes to understanding the computer-based voting systems dominating our elections, this can be perilous indeed.

This was painfully and, I regret to say, tragically in evidence Dec. 15 when John Poulos, the elusive CEO of Dominion Voting Systems, finally appeared in front of a panel of Michigan Republican state senators to answer questions about the Nov. 3 election.

It was in Michigan’s Antrim County where, because of a supposed computer “glitch,” a forensic audit of Dominion equipment was undertaken last week by Allied Security Operations and its co-founder Russell Ramsland.

Ramsland found the Dominion machines rejected an unheard-of 68 percent of the ballots, making them subject to the manual process of “adjudication,” easily subject to fudging.

He deemed the situation a “national security issue.”

Ramsland was not at the hearing, nor were, astonishingly, any information technology professionals at all to ask questions of the Dominion CEO.

The legislators were, as noted above, flying blind—and it sure sounded that way as they read questions fumblingly off cards (from staffers?) and didn’t seem to know how or what to ask in follow-ups.

Given this unprepared performance (I will give my explanation for this later), I reached out to an actual qualified professional—Garland Favorito of VoterGA, who has been deeply involved with the situation in Georgia—to see what he thought about the Michigan proceedings (viewable here).

Mr. Favorito took a look and replied via email:

“The opening statement by CEO John Poulos, claiming it is technologically impossible for a voting system like Dominion to flip votes in real time, has already been proven to be BLATANTLY FALSE by many American computer scientists. I can state categorically, based on my career IT experience and 16 years of non-partisan voting system research, that any voting system can be programmed in advance to flip votes in real time. Mr. Polous may be able to fool members of a legislature or the media but he cannot fool Election Integrity advocates who are IT professionals.”

So, I ask again, why wasn’t a computer scientist or scientists there at the hearing to interrogate Poulos? This may have been their only chance.

“Mr. Poulos further claimed that vote switches have not occurred on Dominion systems. It is fact that hand count audits proved Dominion Democracy Suite 5.5 voting systems swapped votes from President Trump to former Vice President Biden in both Michigan and Georgia. We don’t know what component of the system caused this to occur in Georgia because the Secretary of State [Raffensperger] is blocking forensic system exams in multiple counties. However, we now do know that for the 2020 Presidential election to be considered legitimate, properly conducted hand count audits must be completed by any counties running the Dominion Democracy Suite 5.5 system.”

Now, I will respond to the question I just raised as to why this crucial hearing was conducted in such a perfunctory manner.

Brutal as it sounds, these legislators, even though Republicans, didn’t really want to know the truth. It was inconvenient for them because they would have to act in a situation that is wildly contentious. They would prefer the status quo ante, business as usual, an easier life than confrontation. All they needed to do was look good for their constituents.

If this were not so, they would have been better prepared. (Unfortunately for them, that wished-for status quo ante may be vanishing forever.)

If you read the comments section on The Epoch Times that accompanies the hearing, you will find, among the many who are simply fed up, sharper questions than those asked by any of the state senators.

For example, Poulos denied that Dominion machines were connected to the internet, yet one woman wrote of a poll worker who complained to Dominion she had the wrong software on her machine, only to have had it corrected immediately by the company—over the internet. Why nothing about that?

Further, not many days ago during a recount at the Georgia World Conference Center in Atlanta, Favorito showed me personally how the Dominion system could be connected to the internet through an external server.

Even a child could do it. Well, a precocious 9-year old anyway.

Similarly, Poulos adamantly denied a Dominion connection with the Venezuelan elections and Smartmatic. Unless I was snoozing (a possibility under the circumstances), there was no follow-up, although it is known that the software systems are remarkably similar and that the two companies shared offices in Barbados.

What is the solution to this? The way things are going, we may never know the truth of election 2020, no matter who really won. Even if Trump exercises his powers in the next weeks and seizes all the Dominion computers for forensic investigation, it may be too late. Everything will have been erased or be subject to endless obfuscating litigation.

Whatever the case, the Michigan legislators blew their chance.