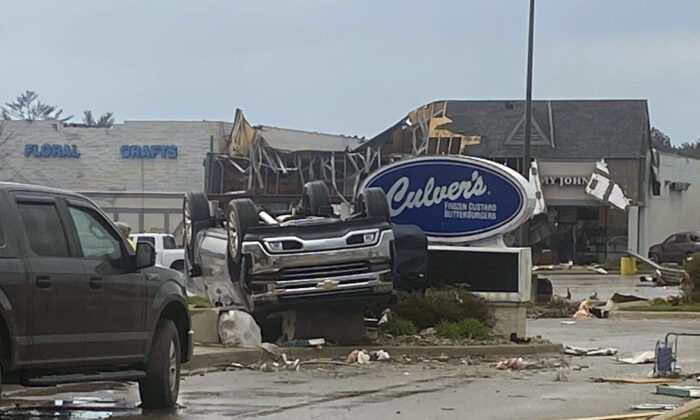 This image, provided by Steven Bischer, shows an upended vehicle following an apparent tornado in Gaylord, Mich., on May 20, 2022. (Steven Bischer via AP)
Regional News

Michigan Gov. Gretchen Whitmer on Friday declared a state of emergency for Otsego County after a tornado hit the Gaylord area and left significant damage to buildings and roads.

“I have declared a state of emergency for Otsego County to rush resources to the affected areas, and the State Emergency Operations Center has been activated to coordinate our state’s response,” she said while visiting the emergency operations center in Gaylord.

A rare northern Michigan tornado tore through Gaylord, a small city of about 4,200 people, on Friday, killing at least two people and injuring more than 40 others as it flipped vehicles, tore roofs from buildings, and downed trees and power lines.

Gaylord is about 230 miles northwest of Detroit.

The police confirmed two persons died in the tornado.

Both persons were in their 70s and lived in the Nottingham Forest mobile home park in Gaylord, which was among the first sites hit by the tornado Friday afternoon.

The National Weather Service pegged the tornado as EF3, on a scale of 0–5, with maximum winds of 140 mph.

Roofs and walls at some businesses in the tornado’s path were shredded. Cars and trucks were turned on their sides or completely flipped over. A video posted online showed a dark funnel cloud approaching as anxious drivers looked on or slowly drove away.

“We have a lot of debris to clear,” state police Lt. Derrick Carroll said.

Police said about 6,500 customers are still out of power as of Saturday morning.

The City of Gaylord imposed a curfew between 7:00 p.m. Friday and 8:00 a.m. Saturday. The authorities urged residents to stay away from the roads.

“Crews are having difficulty getting power restored due to people getting in the way. Stay away from workers and let them do their job. It makes the scene unsafe for everyone and delays our recovery efforts,” Michigan State Police said in a social media post.

Gaylord doesn’t have tornado sirens. Carroll said anyone with a mobile phone got a “code red” warning from the weather service about 10 minutes before the tornado struck.

John Boris of the weather service post in Gaylord said the tornado passed through the community in about three minutes but was on the ground in the region for 26 minutes—a “fairly long” time.

“We don’t get a whole lot of tornadoes,” said Boris, a science and operations officer. “In the state of Michigan, in general, we typically average about 15 or so [a year] and more of those are downstate than they are up to the north. It’s pretty unusual.”

A link to climate change probably doesn’t fit, he said.

“It’s very difficult to attribute something very specific like this to a large-scale signal like that,” Boris said. “If we had these more frequently, that may be a signal.”