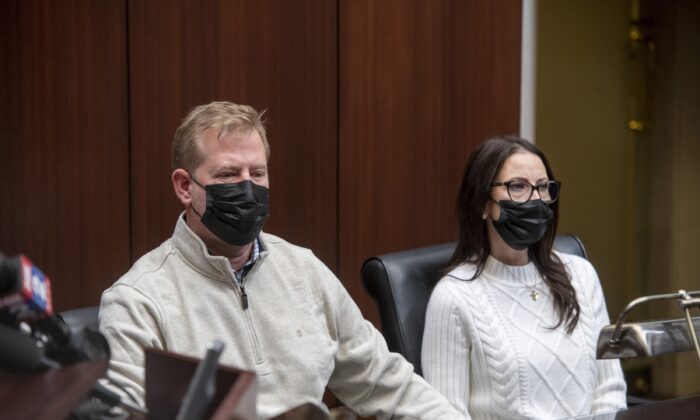 Jeffrey Franz and his wife Brandi listen as attorney Geoffrey Fieger holds a news conference at his offices in Southfield, Mich., on Dec. 9, 2021. (David Guralnick /Detroit News via AP)
Michigan

A Michigan school district has been sued over its alleged failure to stop a school shooting that left four students dead and seven others wounded.

Parents of a girl who was shot in the neck during the Nov. 30 shooting at Oxford High School filed the suits, one on behalf of the girl and the other on behalf of her sister, who was next to her when she was shot.

Jeffrey and Brandi Franz say district and school officials should have prevented Ethan Crumbley, the 15-year-old who is accused of carrying out the mass shooting, from returning to class after he was forced to meet with his parents and school staff following the discovery of a note he penned that suggested he was contemplating committing violence.

“The administrators, the counselors, the teachers, at Oxford High School bear responsibility,” Geoffrey Fieger, an attorney representing the parents, told reporters at a press conference.

Wolf, alerted by multiple parents to concerning social media posts made by Ethan, told them that “there is absolutely no threat,” according to the suits.

“Large assumptions were made from a few social media posts, then the assumptions evolved into exaggerated rumors,” he added.

Throne is said to have sent similar messages.

Teachers who witnessed Ethan searching for ammunition on his phone the day before the shooting and discovered the note also should have acted to remove Ethan from the classroom, the parents charge.

Defendants “gave Ethan Crumbley the opportunity to go to the bathroom, with his backpack, to prepare for his planned rampage, thereby increasing the risk that Plaintiffs’ Minors would be exposed to Ethan Crumbley’s acts of violence,” one suit states.

Riley Franz, 17, was shot as a direct result of the actions, her parents say. Bella Franz, 14, witnessed the shootings. Both are suffering from the trauma and showing signs of post-traumatic stress disorder.

The district and school did not immediately respond to requests for comment.

Prosecutors charged Ethan’s parents, alleging they should have alerted officials to their son’s access to the firearm, should have removed him from school, and should have checked his backpack for the gun.

Oakland County Sheriff Michael Bouchard told reporters earlier this month that law enforcement would have removed the boy from the school and made sure he had no weapons if they were alerted to the situation.

But the school resource officer was not brought into the meeting that included Ethan, his parents, and school officials.

Throne told parents and students in a video message last week that Ethan had been called to the office just hours before the shooting.

Officials determined “no discipline was warranted,” he said.

Throne added on Wednesday that officials have been cooperating with the sheriff’s office and prosecutors. After the probe is done, “my recommendation to our School Board will be that we initiate a review of our entire system,” he said.