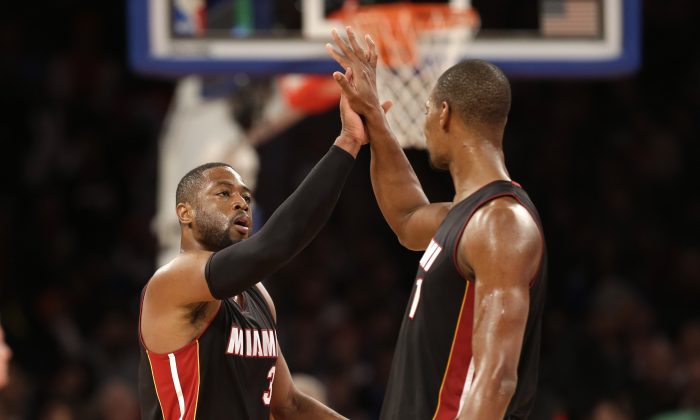 The Miami Heat grabbed a win with Dwyane Wade back in the lineup and are set to play again on Monday night.

Wade has been struggling with injury, missing seven games with a strained left hamstring.

But Wade returned to score 27 points — 13 in the fourth quarter — and the Heat beat the New York Knicks 86-79 on Sunday night.

“For me, the fourth quarter is the only one where I can be selfish,” Wade said.

Wade followed with a baseline jumper and scored 12 of Miami’s next 15 points to help the Heat maintain the lead.

After the Knicks again pulled to 79-77 on Amare Stoudemire’s tip-in with 1:23 left, Bosh hit his 3-pointer and New York never got closer.

“When the situation gets a little tense, a little tight, we need a shot and we run plays that we normally get good looks off of and it was just about having your feet set and shooting with confidence,” Chris Bosh said.

Wade said the Heat have been doing great on offense without him but stressed a need to pick up the defense.

“We just want to get back on track. We hit the road, it feels good that I’m coming back now. But it doesn’t guarantee us nothing,” he told the Sun Sentinel.

“So we’ve got to get back on track. And the biggest thing for us is what kind of defensive disposition do we have when we come out? Offensively, we’ve been playing fine, even when I was out. The guys were still in the top 10 in scoring, as a whole. It’s about how we come out defensively and we take care of that side.”

LeBron James advocated for Shabazz Napier, and is likely the main reason the Heat chose the rookie in the draft.

But then LeBron left for the Cleveland Cavaliers. Napier, though, says he has no hard feelings, despite unfollowing James on Twitter soon after.

Napier told the New York Daily News that he was new to the social media service and didn’t understand how some aspects worked.

Napier also struggled in the summer league but has been playing well this season.

“I was happy to be with this organization once I heard I was coming,” Napier said.

“This is a great organization no matter what. This team is based on championship pedigree and you should love coming to a team like that and I was appreciative that these guys gave me an opportunity like that.”

James was impressed by Napier’s play in the NCAA tournament, which led to a national championship. “No way u take another PG in the lottery before Napier,” he said via Twitter. “My favorite player in the draft!” he added after the Heat picked Napier with the 24th pick.

“Like I said, I was ecstatic when I found out I was playing with the Miami Heat,” he said when asked if it was awkward when James left for Cleveland. “I understand what this organization is about and to be drafted by this team is everything that I wanted.”

Wade’s wife Gabrielle Union was happy with the Heat’s win, and jumped into an interview with Wade.

Wade was answering a question when she suddenly appeared and started talking.

“It was okay, I mean a hamstring pull. Wow. To come back with 27 points, we’re going to talk about the free throws later,” she said.

“He did good for an old geezer.”

The Heat have put some money down for centers Hassan Whiteside and Justin Hamilton.

The Heat included a $100,000 guarantee for Whiteside when calling him up from the D-League last week, and an additional 25 percent became guaranteed Monday.

“I’m really happy that they chose to make a commitment and I’m all-in,” Whiteside told the Sun Sentinel.