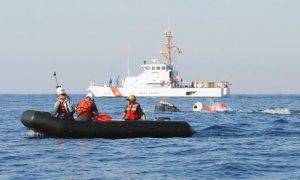 Vaquitas (Phocoena sinus) are more solitary than other cetacean species, but are sometimes found in small groups. Photo by: Paula Olson, NOAA.
Environment

Mexico Finally Gets Serious About Saving The Vaquita

There are likely less than 100 vaquita (Phocoena sinus) on the planet. Found only in the northern pocket of the Sea of Cortez in Mexico, the vaquita is a tiny, shy porpoise that has been brought to the very edge of extinction due to drowning in gillnets used for shrimping. But, after years of stalling, Mexico now appears to be making a final effort to save the world’s most endangered—and smallest—cetacean.

Last week, the Mexican government announced it would ban gillnet fishing across the vaquita’s habitat for two years, an area covering nearly 13,000 square kilometers. But the most important part of this announcement is that the government intends to pay fishers in the area for their lost income.

“This buy-out and compensation scheme is the most comprehensive set of measures to be implemented in the past twenty years in the fight to save the vaquita and provide the local communities with sustainable livelihoods,” said Omar Vidal, the head of WWF-Mexico.

Mexico says it will spend $36 million a year on the program for two years. After which, it will evaluate the plan’s success. Not only will Mexico pay fishers for lost income, but the country also intends to monitor illegal fishing activity using drones, satellites, and even naval bases, according to the Associated Press.

Brendan Cummings, a senior counsel at the Center for Biological Diversity, said he was “pleased” with the announcement, but concerned about implementation.

“There are few indications government officials will see that it is actually implemented or maintained,” he opined.

But Vidal told the New York Times that he thought the Mexican government was “very serious.”

“I really think that this is the last chance [for the vaquita], and we had better get our act together,” he added.

The vaquita’s situation has only worsened in recent years due to a booming—and illegal—totoaba fishery in the region. Vaquitas are prone to drowning in totoaba nets much like shrimp nets, and to date illegal fishers appear to be working in the region with impunity.

Like the vaquita, the totoaba (Totoaba macdonaldi) is also Critically Endangered, but the fish—which can grow to more than two meters in length—has been largely overshadowed by the fight to save the more pleasant-looking and mammalian vaquita. In recent decades, the totoaba has become in high demand in China where its swim bladder is believed to be a delicacy and even have medicinal properties.

The illegal trade in totoaba has become so lucrative that some experts believe it may be linked to organized criminals who could also be involved in narcotics, prostitution, and weapons. After catching totoaba, traders smuggle the bladders through the U.S. and onto China.

“Mexico’s ban will either mark the moment the tide turned in vaquita conservation or it will be the bookend to a sad history of government failure and mismanagement as another species slid into extinction,” said Zak Smith, an attorney with the Natural Resource Defense Council’s Marine Mammals Protection Project. “The vaquita’s future is entirely in our hands and we can save it with the right political will.”

Already, this century has seen the extinction of another cetacean—whales, dolphins, and porpoises—the baiji (Lipotes vexillifer). This freshwater dolphin was wiped out by the industrialization of the Yangtze River ecosystem in China. Overfishing, bycatch, pollution, ship traffic, illegal electrofishing, and dam construction—including the Three Gorges Dam—likely all played a role in its decline and eventual extinction. The baiji had lived on Earth for some 20 million years before humans drove it out.