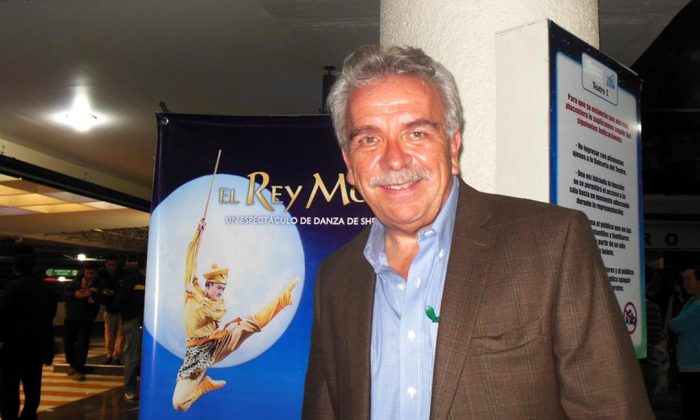 Mexican Director Fascinated by Art Presented in ‘The Monkey King’

The performance is based on the epic novel “Journey to the West”, and its mischievous Monkey King character and his friends, told with classical Chinese dance, music, animated projections, and beautiful customs. Shen Yun’s ‘Monkey King’ debuted in Mexico City on May 8.

“I liked it a lot. … Chinese dance is one of the most beautiful there is … The precision in the movements is wonderful,” said Mr. Moreno, who acts in theater and directs a TV soap opera.

According to Shen Yun’s website, classical Chinese dance is an ancient art form, and is one way in which 5,000 years of Chinese culture have been passed down. Over thousands of years, this art form was continually organized and refined, developing into its current vast and systematic dance form.

Watching the classical Chinese dance presented in the performance, Mr. Moreno said he felt that he is watching the “origins of the artistic creation.”

“I had never seen a Chinese dance show like this … [The performance] is joining the past and the present in a performing expression that I wasn’t expecting, and that I liked a lot,” he said, referring to the use of animated backdrops throughout the performance, alongside classical Chinese dance and music.

“I was taught at the theater school that theatre originates in the Chinese dance … I’m attending the origin of what I was taught, of what I can do everyday in the theater, which is dance.”

There were so many different elements in the performance that Mr. Moreno said he needs to attend a second time to observe them better.

“The precision of the movements, the set-up, the distribution, the way they couple the animation with the theater … I liked it at a technical level. It took me to the technique, the history, of being in the presence of art, the beginning of theater.”

Formed in 2006, Shen Yun has a mission to revive China’s divinely inspired culture. It is based in New York, and is independent of China’s communist regime.

As explained by Shen Yun’s website, “Journey to the West” is a metaphor for spiritual cultivation.

“Each of the main characters was originally in the heavens, living the life of a divine being surrounded by other deities. But because they misbehaved, they were banished to Earth. Their only chance of returning to their true home in the heavens is to cultivate their minds and purify their hearts on Earth,” explains the Shen Yun website.

The performance, Mr. Moreno said, was more than just entertainment.

“You are not just watching a dance show, you’re in the presence of a moment of artistic, spiritual creation, that takes one definitively to a place without words. You enjoy it,” he said.

“The show takes you to a modern time,” he added, pointing to what he saw as metaphors for modern times in the story.