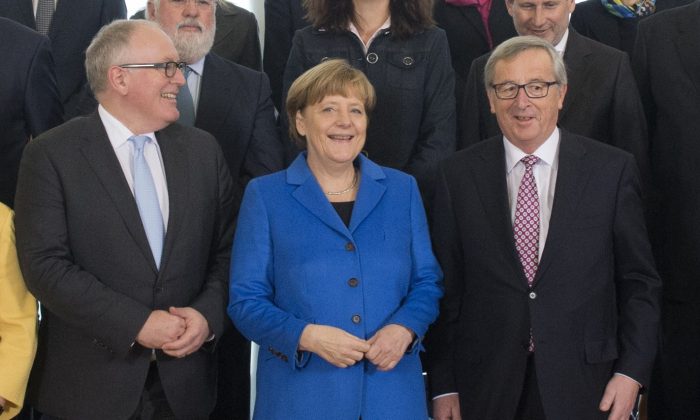 BERLIN— When Germany last hosted a summit of the world’s leading industrialized democracies, Chancellor Angela Merkel was a relative newcomer on the world stage. With less than two years in office she focused on one major theme: the fight against climate change.

Heading into this weekend’s meeting of what is now the G-7 — after Russia’s removal from the club over its actions in Ukraine — Merkel is pursuing a much broader agenda, bolstered by Germany’s growing clout and her own increased political prominence.

“In 2007 Merkel was a world leader, no doubt, but now she’s consistently been rated one of the most powerful leaders in the world,” said Sudha David-Wilp, Senior Trans-Atlantic Fellow with the German Marshall Fund think tank.

“The United States and many other countries recognize Germany to be a leader,” she said. “So I think the tone will be different.”

Since the 2007 summit, Germany has successfully weathered the global financial crisis and come out stronger than ever. It has been getting increasingly involved internationally, as one of the key countries involved in trying to resolve the Ukraine crisis, helping to arm Kurdish militias fighting the Islamic State group and serving as a key broker in the negotiations with Iran over its nuclear program.

Climate change is still at the top of Merkel’s agenda, but for this year’s talks the chancellor says she will pursue an “ambitious agenda” to address a wide range of other issues. These include terrorism, Ukraine, health emergencies like the Ebola outbreak and global economic growth and trade deals.

“We are going to use the 24 hours that we’re together for some very intensive talks over a lot of questions that are affecting the world,” Merkel told foreign reporters in Berlin this week.

The Sunday-Monday summit whose motto is “think ahead, act together,” assembles the leaders of Germany, Britain, France, Italy, Canada, Japan and the United States in the Schloss Elmau hotel at the base of the Alps, about 100 kilometers (60 miles) south of Munich.

Bavarian police say they’re braced for protests, and have mobilized 17,000 police officers from around the country in the biggest operation in their history. Thirty helicopters will patrol the skies and temporary cells have been built out of shipping containers and installed on a nearby former U.S. military base. Austrian police plan to have 2,000 officers on hand across the nearby border.

On the climate front, expectations are high. Merkel has indicated that she supports “de-carbonization” — a pledge of zero carbon emissions — and said in an interview with the Sueddeutsche Zeitung that Germany and France would make a joint push at the G-7, but at the moment “there is not yet agreement” among the nations.

Canada and Japan are the biggest holdouts, with the U.S. somewhere in between them and the summit’s four European powers. Canadian Prime Minister Stephen Harper and Japanese Prime Minister Shinzo Abe are the only other two leaders who were also at the 2007 summit in Germany. Going in, Merkel has already weakened her own position by dragging her feet on implementing national measures meant to reduce Germany’s reliance on coal.

A senior German official, speaking on condition of anonymity to brief the press ahead of the summit, said Merkel wants to move the discussion of de-carbonization ahead as a long-term goal, and also to provide momentum for climate talks in Paris later this year.

But Tobias Muenchmeyer, of Greenpeace in Germany, worried that Merkel may be more likely to accept something weaker on climate change if she can find successes elsewhere.

“I’m realistic enough to see that if she sees that she can’t deliver anything meaningful or significant, I could imagine that she would try to hide this by highlighting other issues more,” he said.

Merkel will hold a one-on-one meeting with President Barack Obama on Sunday morning. The two are expected to talk about the negotiations on the Trans-Atlantic Trade and Investment Partnership between the European Union and the United States.

Obama is also pushing to advance the long-negotiated Trans-Pacific Partnership, which involves Canada and Japan, and the issue seemed likely to come up at the summit.

Germany has said that the refinancing of Greece’s debt — a major issue facing the European Union — is certain to be discussed but is not on the official agenda.

In terrorism, Germany has invited the leaders of Iraq, Nigeria and Tunisia to tell the G-7 countries about their own first-hand experiences, and also specify their needs.

Other security matters include the nuclear negotiations with Iran, the fight against the Islamic State group and maritime security in the South China Sea amid increasingly assertive actions by China.

Rounding out the agenda will be discussions on what can be done to end hunger and malnourishment, with the focus on concrete goals and programs.

Even though Merkel is now armed with more experience than in 2007 — and is taking on much more — don’t expect a noticeable difference to how she approaches the talks, said David-Wilp.

“I don’t think she takes her power for granted, and is still the very pragmatic person who came to power in 2005,” she said. “She’s seen as a steady hand in times of crisis and, let’s face it, Western powers are seeing a lot of crisis right now.”