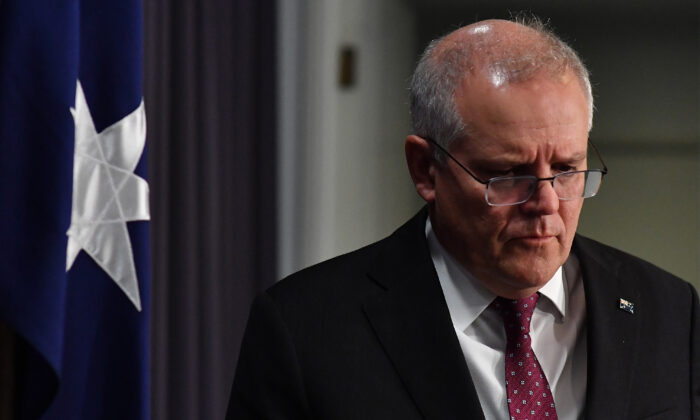 Menzies Had a Message for Morrison: ‘Gender Quotas Are Unfair and Illiberal’

While Australians are worried about rising unemployment and exorbitant electricity bills, the government is concerned about “gender balance.”

Prime Minister Scott Morrison says he is deeply committed to boosting female representation in the Liberal Party, and is pushing for structural reforms to his party to improve such representation in Parliament.

First of all, the idea that the Liberal Party needs to have more female representation in Parliament is a misuse of language. After all, every member of Parliament is supposed to represent Australian men and women alike.

The premise that only a woman can truly represent the interests of women is not only is absurdly sexist but was discredited last year when Foreign Affairs Minister Marise Payne claimed she had “yet to speak to her Qatar counterpart” about the invasive internal examinations Qatari authorities subjected 13 Australian women to in Doha in October.

However, Payne and other Liberal MPs, including Karen Andrews, Sussan Ley, Melissa Price, and Katie Allen, have seized on Morrison’s support for gender quotas, and are calling for greater female representation in Parliament.

Curiously, there is no push for gender quotas in other “exciting” employment areas where women are massively underrepresented. Rarely can women be found in the fields of garbage collection, grave digging, and road construction.

Their fixation on gender quotas indicates these MPs are potentially taking the Liberal Party down the same path of identity politics as the Australian Labor Party (ALP), only more slowly.

Currently, about 50 percent of Labor MPs are female. How is that working for them? The ALP lost the last federal election and received around 300,000 fewer votes from women than the Liberal Party did.

Morrison and his colleagues in Parliament should think twice before dishonouring the founder of the Liberal Party by upholding such a divisive agenda.

As his main biographer David Furse-Roberts points out, Sir Robert Menzies distanced himself from the view of affirmative action feminists who argued that women should be promoted merely by virtue of the fact that they were women.

Furse-Roberts also explains that, to Menzies, such an attitude was deficient because it “overlooked the personal merits and talents of the individual female candidate.”

Calling for “better treatment” of women, current-Prime Minister Morrison said, “I want women to have at least the same opportunities and the same voice and the same safety as men in this country.”

Surely, a competent and capable woman would have no need for such rhetoric to advance their lives and careers?

Menzies would be appalled to see what the prime minister and these Liberal Party MPs with a small “l” are doing to the party he created.

He regarded it as profoundly unfair and indeed a great absurdity to claim a person’s gender as a qualification to become a Liberal MP.

David Furse-Roberts holds a PhD in history from the University of New South Wales and is a research fellow at the Menzies Research Centre. His book Menzies: The Forgotten Speeches has an entire chapter on the “Status and Role of Women.”

The first section in the chapter, entitled Women for Canberra, is based on a broadcast delivered by Menzies on Jan. 29, 1943. There, Australia’s longest serving prime minister said:

Of course, women are at least the equals of men. Of course, there is no reason why a qualified woman should not sit in Parliament, or on the bench, or in a professional chair, or preach from the pulpit, or, if you like, command an army in the field. No educated man today denies a place or a career to a woman because she is a woman.

But there is a converse proposition which I state with all respect but with proper firmness. No woman can demand a place or a career just because she is a woman. If it is outmoded and absurd to treat a woman’s sex as a political disqualification; it seems to me equally absurd to claim it as a qualification in itself …

For myself, I declined to vote for any woman just because she is a woman, but I will vote for her with no prejudice and with great cheerfulness if I am satisfied that she is, in the homely phrase, “the better man of the two.”

For, like most electors, I am not half so interested in the sex or social position or worldly wealth of my representatives and rulers as I am in the quality of their minds, the soundness of their characters, the humanity of their experience, the sanity of their policy, and the strength of their wills.

Years later, in a 1958 address to the Conference of the Headmistresses’ Association of Australia, Menzies re-affirmed his opposition to the idea of gender quota:

Now why? Well, I think it is explainable. I have myself, on more than one occasion, listened to a woman candidate for Parliament who stood up and made it her great policy speech to say, “I am a woman. The woman’s point of view ought to be represented.” If I were to stand up and say in Kooyong (which through sheer animadvertence does me the honour of returning me to Parliament), “I am a man and the man’s point of view ought to be listened to,” they would think I had become a little odd.

As can be seen, advocating gender quotas was entirely anachronistic to Menzies’ classical liberal philosophy.

Clearly, he would completely abhor modern identity politics, and the leftist agenda of gender quotas in particular.

Mark Powell reminds us in The Spectator that quotas for women in Parliament “stem from the creation of Emily’s List by the Labor Left in 1994″—a progressive network supporting women seeking political office.

So, how can the modern Liberal Party dishonour Menzies’ legacy by promising to introduce gender quotas that will surely result in unfair treatment based on gender?

It is quite simple. These individuals are not true Liberals in the sense conceived by Menzies. Indeed, according to Powell, “Menzies was deeply concerned as to how the left had started to infiltrate the party he had founded.”

As Maurice Newman wrote in The Australian,

Lest there be any doubt about Menzies’ philosophy, it is clearly expressed in a 1974 letter lamenting that the state executive is dominated by what we now call Liberals with a small “l”—that is to say who believe in nothing, but who believe in anything if they think it is worth a few votes. The whole thing is tragic.

It goes without saying that Morrison’s beliefs on the supposed unequal treatment of women should be challenged.

Laws make their employment increasingly more difficult. Australian white men swell the ranks of the homeless, and the prison population.

Most of these depressing statistics apply particularly to white working-class men—far more than any other ethnic or gender group. These are men who have lost their place in society and have no encouraging narrative to advance their life.

Despite these sobering realities and statistics, railing against “white male privilege” continues to be the rallying cry of those who control the mainstream media, academic, and politics.

Of course, one would still expect the party founded by Menzies to pre-select candidates solely on the basis of merit, and regardless of gender.

There is also a fine irony in the fact that such gender quotas are now being considered precisely when the New Left cannot even define the word “woman.”