'What we've seen so far is just the tip of the iceberg': Dr. Northrup 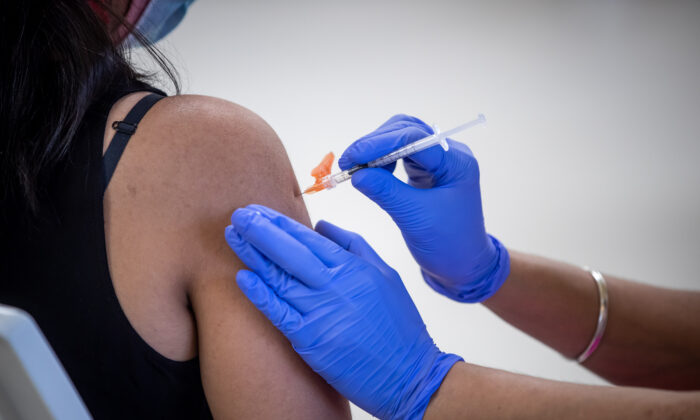 The first of three peer-reviewed research studies on women who suffered menstrual irregularities or a decidual cast around the time COVID vaccines were rolled out begins to shed light on the sudden spike of this historically rare gynecological abnormality.

A decidual cast is when the inside lining of the uterus (endometrium) is shed intact, the entire lining is shed in one piece.

Over the past 109 years, decidual cast shedding (DCS) had less than 40 reported cases in the medical literature. The event had been so rare that there are only case studies and population prevalence data doesn’t exist, according to the research.

In the later 7.5 months of 2021, participants of MyCycleStory.com reported 292 cases out of 6,049 women who participated in the survey.

One of the authors of the study, Dr. James Thorp, is an extensively published 68-year-old physician MD board-certified in obstetrics and gynecology, as well as maternal-fetal medicine, who has been practicing obstetrics for over 42 years.

“The most common causes of DCS in pre-pandemic years include spontaneous miscarriage, ectopic pregnancy, and prolonged progesterone therapy. We speculate that one potential mechanism could include the hypercoagulable state and change in the blood consistency that has been well documented by many embalmers including Mr. Richard Hirschman. Thus, the large, durable post-mortem clots that the embalmers first noticed last year can be viewed in this context as ‘arterial casts’ and ‘venous casts’ and they do have a strikingly similar appearance to that of decidual casts, excluding the shape,” Thorp said.

“Extreme menstrual irregularities such as DCS should not be ignored as there are potentially important implications with regard to the lipid nanoparticles that are known to concentrate in the ovaries and also syncytial antibodies that could result in miscarriage (spontaneous abortions),” he added.

Thorp previously told The Epoch Times that he has been seeing “many, many, many complications in pregnant women, in moms and in fetuses, in children, offspring,” since the COVID vaccine was widely distributed.

“Fetal death, miscarriage, death of the fetus inside the mom,” Thorp added. “What I’ve seen in the last two years is unprecedented.”

Thorp explained that although he has seen an increase in fetal death and adverse pregnancy outcomes associated with the COVID-19 vaccination, attempts to quantify this effect are hampered by the imposition of gag orders on physicians and nurses that were imposed in September 2021, as reviewed in the publication “Patient Betrayal: The Corruption of Healthcare, Informed Consent and the Physician-Patient Relationship” (pdf).

It reads: “A decidual cast may occur when the cessation of progesterone levels results in loss of support for the decidualized endometrial lining. This results in a synchronized detachment of the entire decidualized layer of endometrium, and it passes from the uterus through the cervix and vagina. This tissue mass/clot is often triangular, consistent with the internal shape of the intrauterine cavity. Other less common causes of DCS include cessation of exogenous estrogen/ progesterone therapies, and use of oral contraceptives and injectable progesterone.”

Tiffany Parotto, the lead researcher of the study and founder of MyCycleStory, is particularly distressed about the censorship and deletion of a Facebook group of about 21,000 members where women were talking about their menstrual irregularities.

“The real problem I’m seeing here is that it’s 2022 and somehow still acceptable for the voices of women to be completely erased as if they don’t matter,” Parotto told The Epoch Times.

“The fact of the matter is, tens of thousands of women are experiencing traumatic bleeding and major issues. Women know what is normal for us and what is not. We know our bodies more than any doctor or social media site to know when something isn’t right. What right does big tech have to tell us our stories are not worth sharing? How are we supposed to get to the root of what the cause could be if we are left feeling like we are the only ones experiencing them? I’m disgusted at the idea that our experiences are being suppressed and undermined as if suddenly ‘listen to women’ only means sometimes. So we knew we had to do the work ourselves and created the study. We had to give these women their voices back and let them know that we refuse to allow them to be silenced and we will do what needs to be done to demand attention on this issue,” Parotto said.

Northrup, MD, a former fellow in the American College of Obstetricians and Gynecologists, fears that there could be much more data related to reproductive damage that hasn’t been discovered yet.

“The female menstrual cycle is considered a vital sign as important as blood pressure and body temperature when it comes to health assessment. Our initial findings of bleeding and decidual cast shedding in women who have been exposed to those who have had the experimental injection suggest that what we’ve seen so far is just the tip of the iceberg. The reproductive effects of this shot could be far worse than we’ve been led to believe,” Northrup said.

The authors point out that there are some limitations to this first study.

“First, it is an observational study of patient questionnaires and certainly subject to sample bias. Second, the decidual casts were not confirmed by pathological analysis but self-reported. Third, the pre- and post- pandemic prevalence of DCS cannot be accurately determined at the time of this writing,” they state.