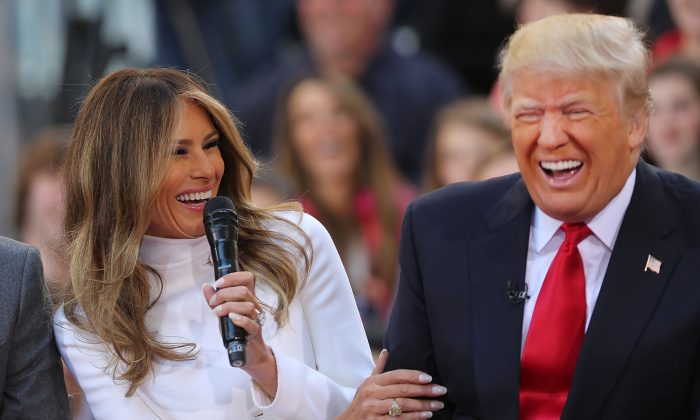 Melania to Donald: ‘Stop Tweeting,’ Hillary to Bill: ‘Turn Off the Lights’

Both confess their husband's most annoying habits
By Steven Klett

Most of the Trump family went on NBC’s early morning Town Hall, and Melania said she wished he would give up “the tweeting.”

When asked about which habit he should give up, “Let’s see,” she said, pausing for a brief moment. “The tweeting.”

“Let’s end it there,” co-host Matt Lauer said after Melania’s comment. “That is the quietest Donald Trump has ever been for seven minutes in his life. “

Trump is a notorious Tweeter, with more than 31 thousand tweets and 7.7 million followers, and has been called the “Ernest Hemingway of 140 characters.”

Sometimes, Trump’s tweets have provoked a backlash, as he did when he retweeted a split picture showing his wife, Melania, and an unflattering picture of Cruz’s wife, Heidi, with the comment “A picture is worth a thousand words.”

Hillary Clinton also made the rounds on the morning news stations, going on ABC’s “Good Morning America” and fielded questions from the audience.

Clinton was asked a similar question as Melania about her husband—what was former President Bill Clinton’s most annoying habit and her response made it seem she had a lot to choose from:

“Where do we start? How long do we have?” she joked before deciding on one in particular.

Clinton Wins New York, but Fight for the Democratic Party’s Soul Goes On

“No matter how tired he is, he always feels like he has to read before he goes to sleep. That means I have to get up and go around and turn the light off before I go to bed!” she exclaimed to laughs.

Hillary also explained her habit of carrying around hot sauce wherever she goes saying that it was something she picked up during the 1992 Presidential election “to stay healthy.”

Since then she’s continued using it “religiously.”

Donald Trump and Hillary Clinton are the frontrunners in the Republican and Democratic parties after both won resounding victories in New York state.