Meet the 7 Men Who Will Rule China 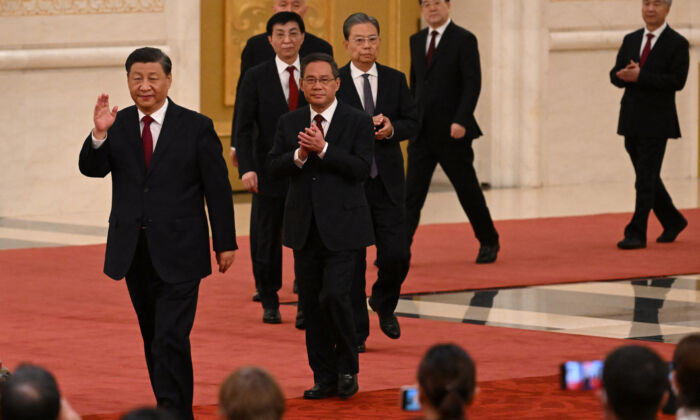 CCP leader Xi Jinping (front) leads members of the Party's new Politburo Standing Committee, the nation's top decision-making body, as they meet the media in the Great Hall of the People in Beijing on Oct. 23, 2022. (Noel Celis / AFP via Getty Images)
By Dorothy Li

Led by Xi Jinping, the seven men strode on the red carpet at the Great Hall of the People in Beijing on Oct. 23, revealing the new generation of China’s ruling elites.

The lineup at the conclusion of the 20th Party Congress demonstrates Xi’s further consolidation of power, with all four newly appointed members being his protégés and allies.

The following are the members who will run the Party for the next five years.

Xi confirmed his third five-year term as Party general secretary, a feat that no one since Mao has accomplished. Mao ruled the country for 27 years until his death in 1976.

Xi also retained his position as head of the Central Military Commission and is almost certain to remain the Chinese leader, which will be unveiled after the rubber-stamp legislative meetings next spring. He had already scrapped term limits by revising the constitution in 2018.

The lack of a possible successor to the 69-year-old leader suggests he may intend to extend his term further, which would normally end in 2027.

When Xi first joined the Standing Committee in 2007, it was clear from his age and from the makeup of the committee that he would replace then-Party leader Hu Jintao when Hu’s term ended in 2012.

Now, five of seven of the Standing Committee members, including Xi, are over 65, with Ding Xuexiang, now 60, being the youngest. It means none of them would be young enough to take over the Party’s top position in 2027. The CCP’s decades-long norm is that those who are 68 or older at the time of the Congress would retire.

Taking over the Party’s No. 2 position is Li Qiang, Shanghai’s Party chief. The financial hub’s most powerful position is often seen as a stepping stone to the CCP’s top decision-making body. Li’s predecessor, Han Zheng, was promoted to the Standing Committee in 2017.

But earlier this year, speculation abounded that Li’s political career was doomed because of the COVID-19 lockdown in Shanghai. Confined to their homes for two months, the city’s 25 million residents struggled to obtain food and medicine, which angered the public and provoked numerous small-scale protests.

The political rise of Li shows “Xi Jinping’s criteria is the connection with him, absolute loyalty to him, and obedience to him,” said Feng Chongyi, a professor of China studies at the University of Technology Sydney.

The 63-year-old is Xi’s close ally. When Xi was a Party secretary of Zhejiang Province, Li was in charge of Wenzhou, a major city within Zhejiang. In 2004, Li was promoted to secretary-general of Zhejiang, becoming Xi’s right-hand man.

After Xi took the helm at the 18th National Congress in 2012, he promoted Li to governor of Zhejiang Province. Three years later, Li became Jiangsu Province Party secretary, the top position in the rich, coastal province that abuts Shanghai. In 2017, Li became Party secretary of Shanghai. Now, Li is widely expected to be the next premier.

Anti-corruption czar Zhao Leji is one of two people maintaining their positions on the Standing Committee. Zhao most recently headed the Central Commission for Discipline Inspection, the driving force behind Xi’s campaign to rid the Party of political enemies—namely officials still loyal to former CCP leader Jiang Zemin.

The 65-year-old also led the Party’s Organization Department, a powerful body responsible for appointments of senior officials. Zhao helped promote many of Xi’s allies, according to the Brookings Institute.

Zhao started his political career in the northwestern Qinghai Province, where he was born, and worked his way up in the provincial bureaucracy. He became Qinghai’s Party secretary in 2003. Zhao then served as the Party chief of Shaanxi Province before arriving in Beijing in 2012.

Another person who retains a position in the Party’s top governing body is Wang Huning, a veteran theorist.

The 67-year-old Wang is a rare political figure who has served three Party chiefs amid fierce political infighting and the once-in-five-year reshuffles.

“He [Wang] is not loyal to any leader,” Feng told The Epoch Times. “He is just a theorist that the Party found useful.”

The former professor and dean of the law school at Fudan University defined core ideologies for the three leaders, from Jiang Zemin’s Three Representatives, to Hu Jintao’s Scientific View on Development, to Xi Jinping Thoughts.

“Wang Huning’s presence also indicates to me that the ideological bent of the Party and Xi will continue and even deepen,” Dylan Loh, assistant professor at Nanyang Technology University, told Reuters.

A newcomer to the elite standing committee, Cai Qi has known Xi for more than two decades. Cai worked under Xi when he held top posts in Fujian and Zhejiang provinces. After Xi took power, Cai was promoted to Beijing before he became the city’s Party boss in 2017. In the same year, he joined the Politburo, despite public anger over his forced eviction of migrant workers on Beijing’s outskirts.

On Oct. 30, Cai takes over as First Secretary of the Secretariat, overseeing the Party’s propaganda and ideology work.

As Xi’s right-hand man, Ding Xuexiang’s elevation to the Standing Committee is no surprise to observers, although he has never been a provincial-level Party secretary.

Ding’s ties to Xi could date back to 2007. When Xi briefly served as Shanghai’s Party secretary, Ding was the city’s secretary-general and Xi’s top aide. In 2013, just a few months after Xi took office, Ding moved to Beijing first as the deputy director of the General Office, then as leader of the powerful office that manages the top leadership’s administrative affairs.

The 60-year-old has accompanied Xi on many trips abroad.

“[Ding] has probably spent more time with Xi Jinping than any other official over the past five years,” Neil Thomas, a senior analyst for China and Northeast Asia at the Eurasia Group, told Reuters.

Li Xi, Party chief of the southern economic powerhouse Guangdong Province, is also a new face on the Standing Committee. The 66-year-old’s bond to Xi could be traced to indirect links to Xi’s late father, Xi Zhongxun, who was a Party revolutionary, according to the Brookings Institute.

Li spent most of the first three decades of his career in northwest China, in the provinces of Gansu and neighboring Shaanxi. In 2015, Li was promoted to Party chief of northwestern Liaoning Province.

“As Party secretary of Liaoning, Li Xi was known for his tough stance against corruption and his enthusiastic support for Xi’s call for more strict enforcement of Party discipline,” Cheng Li, director of the John L. Thornton China Center at The Brookings Institution, told Reuters.

At the conclusion of the 20th Party Congress, Li will succeed Zhao Leji to lead the anti-graft agency. Analysts suggest that Li’s political advancement reflects Xi’s plan to intensify his anti-corruption drive over the next five years.

“I suppose [the anti-corruption work] after the 20th Party Congress would be fierce,” said Zheng Xuguang, a U.S.-based Chinese commentator and economist. “It could be a ferocious purge.”

Luo Ya, Ning Haizhong, Annie Wu, and Reuters contributed to this report.