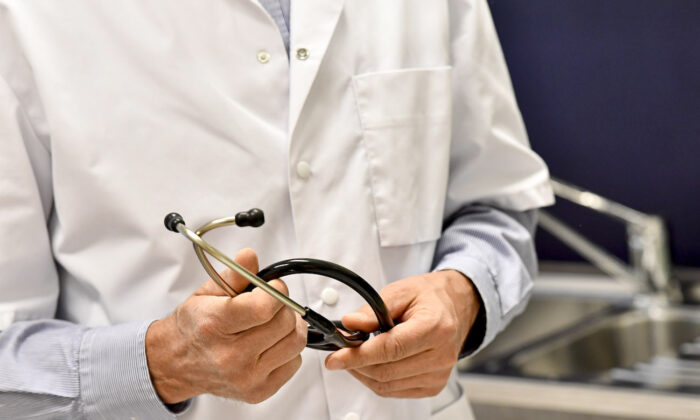 A doctor holds his stethoscope in this file photo. (Dirk Waem/Belga Mag/AFP via Getty Images)
By Enrico Trigoso

“Vaccine hesitancy,” “vaccine misinformation,” and “denigrating the vaccine” are terms that have caused a lot of trouble for some physicians who have questioned the mainstream media, big pharma, big tech, and political narratives that the COVID vaccines are “safe and effective.”

Dr. Wade Hamilton, a pediatric cardiologist, told The Epoch Times he was just following his Hippocratic Oath when he didn’t suggest the COVID vaccine to a girl who already had COVID-19 and therefore possesses natural immunity.

With a dispassionate voice, he said that around Jan. 1, he had to stop working, in part related to an attack on his license.

“Nobody likes to have people in their office getting attacked by the Board of Medicine,” Hamilton said.

“In general, in medicine, that’s never been done previously in history—that you give somebody a vaccine or a shot that they already have natural immunity to—since there’s no benefit and there’s significant potential risk.”

In September last year, the American Board of Internal Medicine (ABIM) issued a statement that threatened physicians who “provide misinformation” about the COVID-19 vaccines—without defining what “misinformation” entails.

“The Federation of State Medical Boards (FSMB), which supports its member state medical licensing boards, has recently issued a statement saying that providing misinformation about the COVID-19 vaccine contradicts physicians’ ethical and professional responsibilities, and therefore may subject a physician to disciplinary actions, including suspension or revocation of their medical license. We at the American Board of Family Medicine (ABFM), the American Board of Internal Medicine (ABIM), and the American Board of Pediatrics (ABP) support FSMB’s position. We also want all physicians certified by our boards to know that such unethical or unprofessional conduct may prompt their respective board to take action that could put their certification at risk,” the statement reads.

Hamilton continued: “In other words, you’re not allowed to have an opinion separate from that of the Board of Medicine.

“I considered the risk-benefit ratio. And at the time, the risk of dying of COVID for any child was statistically, essentially zero. There were almost no deaths from COVID in children. And yet … there is no information about the safety [of the vaccine]. So to give an mRNA vaccine which is untested technology and in terms of preventing diseases with no real justification for a young person, I thought that the risk-benefit ratio favored not doing the shot.

“I have, throughout my career, gotten many permissions for invasive procedures that I was going to perform … and I am not willing to forego or I don’t think anyone should forego informed consent and the dictum of  ‘do no harm,’ so those two things are basic to my concept of medicine, and so I wasn’t willing to do what the board said.

“Skipping informed consent in the case of the experimental COVID shots cannot be justified and demonstrates a lack of respect for the patient and for the long-established principles of medicine,” Hamilton said.

Hamilton gave a medical exemption for the vaccine in one case, and says that some psychiatrists filed a complaint against him for “denigrating the vaccine.”

“It’s not a true-false test, it has to do with the interpretation of your answers. I’m paying $5,700, and they are the ones stipulating who’s giving the test. And that’s the group they always use for these tests. So I feel like they’re in an adversarial situation, as far as I’m concerned, they’re not likely to be as objective as I would hope. If I could have the tests delivered by someone I chose, I would be willing to do it. But they don’t agree to that.

“I stopped working since they required the shot to work at the hospital, which I personally did not want. And I also stopped working because of the fact that the Board of Medicine is trying to run the whole show,” Hamilton said.

He said his license was “emergently” suspended just prior to Thanksgiving.

“I was the first physician in the country to have my license suspended for misinformation. Emergency suspensions are supposed to be reserved for physicians or other medical providers who pose a direct immediate threat to the public,” Gosselin told The Epoch Times.

“This usually means that patients have died, been molested, or been seriously hurt by a caregiver. The statewide and national news initially reported that I was committing fraud, deceit, misinformation, medical incompetence, and the catch-all disciplinary offense known as ‘unprofessional conduct.’ An emergency suspension means that my entire patient base including cancer patients, addiction patients, and the chronically ill would be left without a physician at a time when Maine had gutted the medical system of good physicians who did not want to get the dangerous jab and who were not willing to sell out patients to maintain their positions and licenses.”

“Taking a physician’s ability to practice after years of struggle and sacrifice may be a loss but sustaining one’s license at the expense of your patient’s well-being defies logic and basic medical ethical principles. One might say you’re selling your soul for 30 coins of silver,” Gosselin asserted.

Dr. James Thorp MD is board-certified in obstetrics and gynecology, as well as maternal-fetal medicine, and has practiced obstetrics for over 42 years.

He is very disappointed in the institutions that recommended the vaccine for pregnant women, and says that he has been seeing many more cases of fetal deaths and miscarriages inside mothers since the rollout of the COVID vaccines.

“It is unprecedented in the history of obstetrics that [the different institutions in charge] would violate the eternal commandment & golden rule of pregnancy: ‘never ever use a new drug or vaccine in pregnancy without years of experience and extensive long-term safety experience and pregnancy outcomes data.’ There was never any credible research documenting safety in pregnancy prior to rollout and there have been many flashing red lights from our pharmacovigilance tools that have been blatantly ignored and dismissed,” Thorp told The Epoch Times.

Thorp also sent The Epoch Times a letter he got from the American Board of Obstetrics and Gynecology (ABOG) where they say if any physician shares what they call misinformation about COVID, they “may subject a physician to disciplinary actions, including suspension or revocation of their medical license.”

Another maternal-fetal medicine doctor talked to The Epoch Times under the condition of anonymity. “I simply cannot believe the way the medical boards have threatened the doctors. Shocking to me. I grew up in communism. This is all haunting!” the doctor said.

“Practicing medicine in an era in which one cannot question the evidence they can plainly see in their patients is medical tyranny. Plain and simple. A gag order such as this is straight out of George Orwell’s classic 1984,” Christiane Northrup, MD, former Fellow in the American College of Obstetrics and gynecology, told The Epoch Times.

Dr. Michael Huang, a specialist in family medicine from California, says he has been issuing thousands of medical exemptions from patients that were denied these elsewhere. His office was swamped with calls and emails including people from other states and even other countries with people asking for mask and vaccine exemptions, including firemen and nurses.

On Aug. 17, the state medical board issued a statement encouraging people to report doctors who are “granting mask exemptions inappropriately” and warning the physicians could face “disciplinary action” for issuing exemptions “without conducting an appropriate exam and without a finding of a legitimate medical reason supporting such an exemption.”

He told The Epoch Times that he is being investigated and that he recently had an interview where two district attorneys and an investigator were present.

“I had to bring my attorney with me. I spent two, three hours there,” Huang said.

“It’s the employer that’s being encouraged by the Medical Board to report me and other physicians, so they’re basically creating an environment that if the patient needs the exemption, they can’t get it from their doctors because everybody’s deathly afraid to lose their license.”