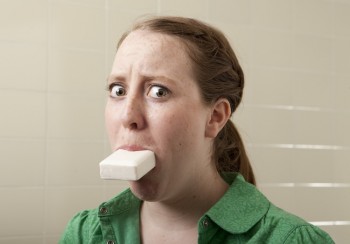 'Wash your mouth out with soap' - teens exposed to profanity on television and in video games are more likely to swear and develop aggressive behavior, new research suggests. (BYU)
Science

Evelyn So
View profile
Follow
biggersmaller
Print
Exposure to swearing on television and in video games can increase aggression in youngsters, according to new research from Brigham Young University (BYU) in Utah.

In what seems to be the first study to look at the effect of profanity in the media on teenagers, the researchers found it to be associated with physical and relational aggression.

“Profanity is kind of like a stepping stone,” said study lead author, Sarah Coyne at BYU in a press release. "You don’t go to a movie, hear a bad word, and then go shoot somebody.

"But when youth both hear and then try profanity out for themselves, it can start a downward slide toward more aggressive behavior."

“It seems that, as adolescents are exposed to profanity in their favorite media, they internalize and solidify mental scripts and schemas in support of profanity use," wrote the researchers in the study, using a general learning model to analyze results. "Such schemas then might lead to increased profanity use in real life."

Although the study was not longitudinal, meaning observations were not repeated over time, statistical modeling shows that there is a chain reaction effect—exposure to profanity leads to its acceptance and use, which can then influence adolescent aggression.

"On the whole, it’s a moderate effect," Coyne explained. "We even ran the statistical model the opposite way to test if the violent kids used more profanity and then sought it out in the media, but the first path we took was a much better statistical fit even when we tried other explanations."

In their paper, the researchers concluded that "the television industry should aspire to be more accurate with ratings concerning profanity,” and that “game descriptions should include warnings to parents regarding exposure to profanity or other questionable conversation through this route.”

Brad Bushman at Ohio State University specializes in the causes and consequences of aggression, but was not involved with the study. "This research shows that profanity is not harmless," he stated in the release.

"Children exposed to profanity in the media think that such language is ‘normal,’ which may reduce their inhibitions about using profanity themselves," he added. "And children who use profanity are more likely to aggress against others."

"These are very important findings for parents, teachers, and pediatricians."

The study was published in the journal Pediatrics on Oct. 18.