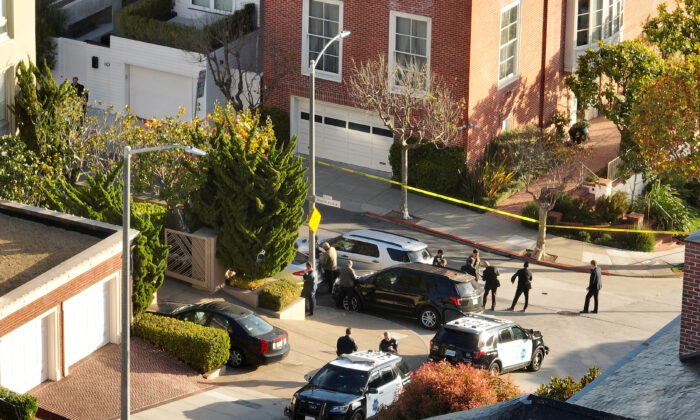 In an aerial view, San Francisco police officers and FBI agents gather in front of the home of U.S. Speaker of the House Nancy Pelosi in San Francisco, Calif., on Oct. 28, 2022. (Justin Sullivan/Getty Images)
By John Ransom

In an election year that has Democrats often using the “extremist” label on the GOP to distract from the country’s economic problems, experts say that the rush by mainstream media to blame “right-wing extremism” for the attack on the husband of House Speaker Nancy Pelosi (D-Calf.), has actually harmed the Democrats,

This summer the Democrats used the Jan. 6 Committee hearings, amplified by the media, to highlight the “danger to democracy” that the GOP allegedly poses to the country. But one observer said that the quickness with which some media outlets alleged that the attack on Paul Pelosi was the result of a conservative obsession—before more detail about the alleged assailant came to light—betrayed an underlying agenda.

“It would have behooved them to just wait [and get the facts], but instead they have painted an entire part of the country, everybody, as an extremist” over the attack, Carla Miller, national spokesperson for Law Enforcement Today, the largest law enforcement-owned media company in the United States, told The Epoch Times.

“The message from the media is clear: If you’re against the Democrats, you’re an extremist. And I think it’s definitely done more harm to them than good,” said Miller.

The attack, coming as early voting and mail-in ballots were coming in for the midterm elections, allowed the liberal establishment media to almost happily lunge at the chance to paint Republicans as extremists, said Adam Guillette, president of Accuracy in Media, one the nation’s oldest conservative media watchdogs.

“I think it’s morally outrageous when journalists celebrate tragedies like this, which, is exactly how some of them reported this story,” Guillette told The Epoch Times.

“You almost felt like some of these journalists saw this as a political opportunity to score points in the final days of the election. And in reality, it’s just a terrible story about a deranged man,” he added.

DePape embraced extreme views of both the left and the right.

One conservative media strategist said that if the idea was for the media to try to give the Democratic Party a boost in the election, it’s “not likely to work in the favor of Democrats.”

DePape, who is residing in the country illegally, represents “a failure to deal with crime and mental health issues for which Democrats will mostly be held responsible,” Tony Marsh of Savanna Communications, who assisted then-candidate Glenn Youngkin win Virginia’s governor’s race in 2021, told The Epoch Times.

“It’s also likely to reinforce the public’s view that both parties have created a kind of toxic political environment by catering to their fringe bases of support,” added Marsh.

“The independent voters in San Francisco know that this was an addict driven crazy by his addiction,” which has become an all-too-common sight for San Franciscans living under a Democrat hegemony, said Boehner.

If anything, local residents are used to Pelosi being harassed and targeted by radical, progressives, said Boehner, who is 37.

“Nancy Pelosi is unpopular with the radical left in San Francisco. When there’s a protest at her home its generally the leftists, not Republicans or independents,” he added.

DePape was a well-known nudist activist, as has been widely reported.

Pelosi has previously condemned nudism in a 2013 interview with the Huffington Post after her home city outlawed public nudity.

“Enough with the public nudity,” Pelosi told The Huffington Post when asked about the city’s ban. “Please. We have our standards.”

Miller of Law Enforcement Today said that DePape’s activism was more likely the cause of the attack, based on law enforcement reports and comments from people who know DePape.

“Based on some of the information that’s come out from his girlfriend about his stances and issues, it doesn’t necessarily seem that that’s even being portrayed by the media correctly,” Miller said.

“I think that the media should be a lot more responsible especially when they’re supposed to be a credible place we [can] get the truth,” said Miller, adding that the media should report only on the actual information they have at the time instead of “their speculation or potentially pushing a scripted narrative for a certain agenda.”

But Miller also blamed the police for being coy about releasing information on the case, especially because it involves someone high profile.

The authorities in San Francisco have refused to release the body cam footage and the 911 call from the night of the attack.

The San Francisco Police Department denied a public records request from The Epoch Times for body camera footage from the officers who responded to the Pelosi home, stating that “disclosure of information may endanger successful completion of the investigation.”

When police hold back information that the public has a right to know, especially with someone involved in a position of public trust, it just fuels speculation, said Miller.

Miller contrasted the slow-moving release of information in the Pelosi case to the quick release of video and other evidence demanded by politicians and the public when the case involves alleged police violence during the apprehension of an alleged criminal.

“I think, unfortunately, there’s a different standard, when it comes to somebody who is high profile and powerful like this,” Miller said,

If the same level of transparency were applied in this case, Miller contended, then this would prevent false information from finding traction.

“Unfortunately, what we’ve seen is that the longer that the facts are kept secret, the bigger danger [of] what I call ‘conspiracy speculation’,” which she said is the manufacturing of stories that contain false information.

“And because of the way the world works, even if information is retracted or refuted, it doesn’t matter if the fake narratives are out there on either side already,” added Miller.

Boehner, said for example, that he understands how some conservatives might find it incredible that House Speaker Nancy Pelosi’s mansion didn’t have security the night Paul Pelosi was attacked, but since Boehner is a resident who sees the house regularly, he can attest to this.

“I live here and I drive by her house regularly. Unless Nancy is in town there is no security guard and it’s not in a gated community,” said Boehner.

But Marsh said there is a big difference between a meme on Facebook and what the Democrats and the media are doing.

“What will also hurt Democrats is the obvious hypocrisy they display when they claim conservative rhetoric resulted in the attack, even after Biden gives a speech in which he claims half the voters in America are a threat to democracy and must be stopped,” said Marsh in reference to Biden’s summer speech in Philadelphia, which was widely criticized by Republicans.

On Nov. 2, Biden in a speech again took aim at “extreme MAGA Republicans,” saying they posed a threat to democracy.

“I think voters will forgive much, but they don’t like it when they feel like they’re being played. That’s a huge problem with Biden and the Democrat leadership,” said Marsh.

The problem, said Guillette of Accuracy in Media, is that the people who run the media in the United States today just want to sell people what they want to hear whether it’s true or not.

“That has caused the media to have record-low ratings and has led to record-low diminishing trust in the media amongst mainstream Americans,” he added.

Marsh agreed, arguing that the lack of trust in the news media and government isn’t coincidental.

“America’s culture is sick and we’re all breathing in a noxious gas of confused values and bankrupt morality that is corrupting the essential ingredients of a civil society,” he said.

And unfortunately, events like the Pelosi attack, highlight that bankruptcy and moral corruption, rather than diminish it, said Marsh.

The Epoch Times has reached out to the San Francisco Police Department, Democratic National Committee, and White House for comment.