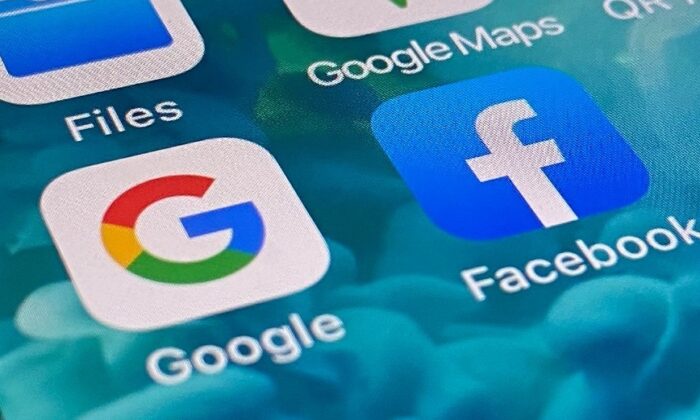 The logos of mobile apps Facebook and Google on a smartphone in Sydney, Australia, on Dec. 9, 2020. (The Epoch Times)
Judiciary

A West Virginia media company that operates several newspapers is suing Google and Facebook for threatening the extinction of local newspapers across the country with their allegedly anticompetitive business practices.

HD Media on Jan. 29 filed a lawsuit asking a federal court to determine whether the two Silicon Valley companies had violated antitrust laws. The lawsuit claims Google has unlawfully exercised monopoly power of the digital advertising market, which has prevented newspapers from competing in the market and losing their primary source of revenue.

It also claims that Google and Facebook had “unlawfully conspired to engage in anticompetitive conduct” through an alleged secret deal nicknamed “Jedi Blue.” Details of the alleged agreement were first revealed when 10 state attorneys general sued Google for multiple violations of federal and state antitrust and consumer protection laws.

According to a redacted version of the lawsuit (pdf) filed in December, Facebook announced in 2017 that it would try a new method of selling online advertising called “header bidding,” which would act as a threat of competition for Google. The lawsuit suggested Facebook eventually “curtailed its involvement” with the project after Google gave Facebook “information, speed, and other advantages in the [redacted] auctions that Google runs for publishers’ mobile app advertising inventory each month in the United States.”

The Wall Street Journal and The New York Times, which both say they’ve reviewed an unredacted version of the complaint, reported the alleged secret deal referred to in the lawsuit was code-named “Jedi Blue” by Google.

HD Media’s lawsuit claims that as a result of Google and Facebook’s alleged anticompetitive and monopolistic practices, newspapers in West Virginia and across the country are facing “a very real existential threat to their existence.”

“Without redress, these newspapers, and hence the citizens of West Virginia, may well end up in the ‘news desert,'” the lawsuit states (pdf).

It claims that Google’s monopoly has created an uneven playing field to compete for online advertising revenue. It says Google had integrated itself through numerous mergers and acquisitions to “enable dominion over all sellers, buyers, and middlemen in the marketplace.”

“The freedom of the press is not at stake; the press itself is at stake,” the filing states.

“As a result of falling revenues, newspapers are steadily losing the ability to financially support their newsrooms, which are costly to maintain but provide immense value to their communities. A robust local newsroom requires the financial freedom to support in-depth, sometimes years-long reporting, as well as the ability to hire and retain journalists with expertise in fundamentally local issues, such as coverage of state government.”

HD Media is seeking an order that declares that Google and Facebook’s actions violated the law and blocks them from further engaging in such conduct. It also seeks damages for any injury caused.

HD Media owns and operates newspapers such as The Herald-Dispatch in Huntington and Cabell County, the Charleston Gazette-Mail, The Wayne County News, The Putnam Herald, the Williamson Daily News, The Logan Banner, the Coal Valley News in Boone County, and The Independent Herald in Pineville.