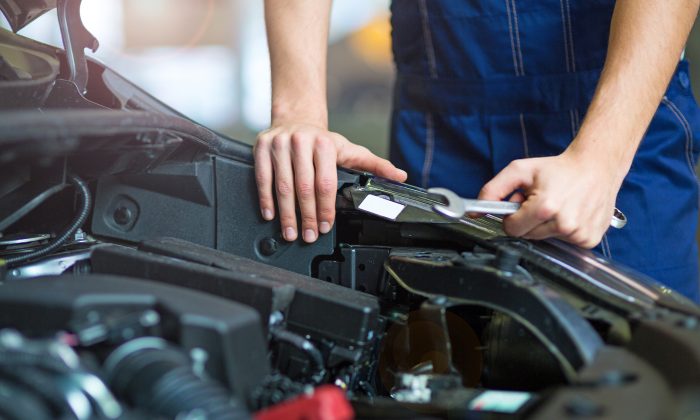 Settled in 1806, Mechanicsburg, Pennsylvania was named for a settlement of mechanics who built and repaired Conestoga wagons. One can imagine mechanics handcrafting custom parts for wagon repair.

Today, the mechanics of Mechanicsburg work on cars and get parts from various suppliers, but lately, access to auto parts has been a bit hit and miss.

“We’re running into some supply chain issues. It’s really random,” Jesse Coble of Dove’s Auto Repair in Mechanicsburg, Pennsylvania told The Epoch Times in a phone interview. He noted that air conditioner condensers have been noticeably affected. “We had a customer with an Acura waiting for four weeks,” Coble said.

Certain brands of oil filters are sometimes back-ordered, and the business had to wait two weeks to get brake cables for a Dodge.

“Tires are getting hard—to find what you want, when you want—so we’ve been telling customers, you better plan ahead,” Coble said. “I was just telling a customer, we had 12 in stock at the warehouse, but I can’t tell you what the situation is going to be in four weeks. He went ahead and got the tires now.”

In addition to unpredictable parts availability, the cost of some parts has suddenly jumped, James Souders, general manager at Hampden Automotive & Towing in Mechanicsburg, told The Epoch Times in a phone interview.

“To install front brakes and rotors on a domestic car typically would cost $350-$375 for parts, labor, and everything out the door,” Souders said. “We had a Hyundai Santa Fe in a week ago for front brakes and it was $490 out the door. That’s a pretty big jump. We have a lot of repeat customers who come in and expect one price, and I’ve giving them these new prices. Even the people who can’t really afford it. It makes me feel bad. But they don’t have a choice. They’ve got to get back to work, and I’ve got to cover my costs.”

The cost of oil for oil changes has gone up 25 percent in the last month, Souders said.

“I buy oil by the drum. Tires have gone up too.”

Souders stopped quoting tire prices over the phone after he told a customer one price but it went up $15 per tire by the time the customer came in.

“Parts that normally would be here the next day are taking longer. I waited a month and a half for a plastic interior door handle for a 2012 vehicle. That was a part that was readily available before.”

“It’s shipping. We’re not getting parts. It’s everything the government is putting in motion,” Souders said. “You can’t get anything and it’s going to get worse. It really is.”

“We can fill some of those gaps that are being left by some of the parts shortage,” Blalock told The Epoch Times in a phone interview.

Automotive recyclers buy vehicles that are no longer road worthy, dismantle them, inspect parts and resell the parts. Different parts are listed in a computer and can be shipped overnight.

“For the do-it-yourselfer who wants to save a lot of money, you can go in and remove your own parts,” Blalock said.