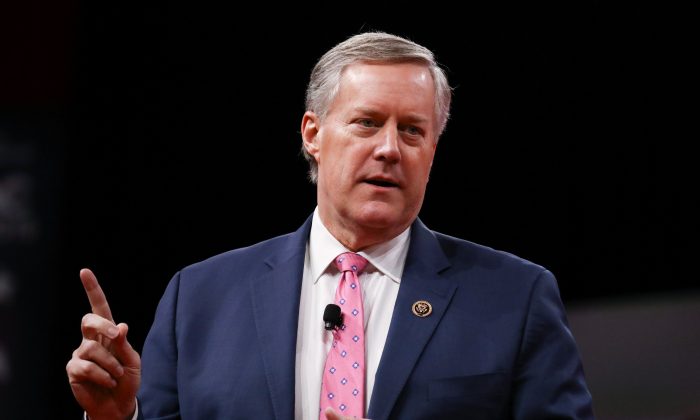 Meadows: ‘There’s a Cover-up Within Certain Realms at the FBI’

Rep. Mark Meadows (R-N.C.), in an interview on “Sunday Morning Futures with Maria Bartiromo,” touched on a wide range of issues including the investigation by Justice Department (DOJ) Inspector General Michael Horowitz, the potential testimony before Congress of former special counsel Robert Mueller, the release of new documents this week, and whether people in the FBI and DOJ will be held accountable.

About the investigation by Horowitz into alleged FISA abuse, Meadows said that he expects the report to be delayed.

“Only Michael Horowitz knows the exact timeframe of when it’s coming out. Obviously, the attorney general had indicated that he hoped to see it in June. I’m not as optimistic now. And one of the reasons for that is additional information has been given to the inspector general for them to investigate,” Meadows said.

“I would rather them get it right than get it fast. And I believe their whole team is doing a very good job of making sure that they hold those people accountable. … But based on what I’m seeing—based on additional information being shared with them—I think it will be a while.”

The new information likely comes from a variety of sources, including newly released notes from State Department official Kathleen Kavalec. Another, and more likely, reason for the delay comes from the recent agreement by dossier author Christopher Steele to testify. Steele was hired by the Clinton campaign and the Democratic National Committee (DNC), through Fusion GPS, to produce the salacious dossier on then-candidate Donald Trump during the 2016 presidential election.

Steele’s decision to speak with the inspector general (IG) was disclosed on June 4 during Trump’s visit to the UK and may well have been tied to discussions taking place with UK officials at that time. It seems highly doubtful the decision was made by Steele himself.

At the time this was announced, The Epoch Times noted the distinct possibility of a delay in the IG’s report. If Steele is indeed interviewed by the IG, his information and his interactions will be potentially so central to the IG’s report that anything said will likely have to be both investigated and verified.

Steele’s interactions touch an array of central figures including a number of individuals at the FBI; DOJ official Bruce Ohr (and Ohr’s higher-ups); then-Assistant Secretary of State for European and Eurasian Affairs Victoria Nuland and others at the State Department, including Kavalec and  Jonathan Winer; Fusion GPS co-founder Glenn Simpson; and of course, current and former members of UK intelligence.

Mueller to Testify Before Congress?

Meadows also was asked about the chance that Mueller would testify before Congress.

“If the Democrats are smart, they will let him be done with it, because I can tell you, Jim Jordan and I are very prepared to ask a series of at least eight different questions that would indicate perhaps a lack of thoroughness on behalf of Robert Mueller and his team about the Mueller report,” Meadows said.

Meadows said he believes that “Andrew Weissman, who was actually involved in some of the early work at the FBI and DOJ when they were first starting with Peter Strzok and Bruce Ohr and them, you know, he came on.”

“I think his fingerprint is all over this particular Mueller report and, from my perspective, it’s a one-sided report that doesn’t give the privilege of a cross-examination. So if they come, they need to be prepared to be cross-examined with the facts, which would paint a very different picture on behalf of this president, and give credence to why he has been so upset with the ongoing investigation,” he said.

Meadows said in the interview that “some of the facts that they put forth in [the Mueller report] are a misrepresentation of what we actually know.”

The Epoch Times recently published an article detailing how the Mueller report appears to have been carefully worded by lawyers working under Mueller, and perhaps Mueller himself, in a manner designed to inflict political damage on the president.

We now know that sections of the report were selectively edited to provide damaging portrayals and apparent misrepresentations. Examples include the representation of the transcript of a phone call between the president’s attorney John Dowd and the attorney for former national security adviser Michael Flynn; a letter from the attorney of an individual referenced in the Mueller report; and a sequence of dates concerning the meeting between Trump campaign adviser George Papadopoulos and Australian diplomat Alexander Downer. There are also troubling and disturbing details surrounding a heavily used witness in the Mueller report, George Nader.

During the interview, Meadows said the FBI knew that “they needed to go after Russia, and instead of going after Russia, they went after the president of the United States.” He reiterated, “That’s all going to come out.”

Meadows revealed that he had reviewed additional documents indicating that prior to the first FISA application on former Trump campaign adviser Carter Page, FBI Deputy Director Andrew McCabe, FBI agent Peter Strzok, and others in leadership positions at the bureau were aware that Steele’s dossier wasn’t credible and “did a rush to make sure they could actually surveil him. That will come out because there’s a cover-up within certain realms at the FBI.”

Meadows also appeared to suggest he has seen information that validates Trump’s concerns, noting: “The more evidence that we see, the more that the American people can judge for themselves. They’ll start to understand why this president has been so upset and why he’s called it a hoax.”

Meadows said in his interview that we will “see some additional documents come out this week.” The congressman stopped short, however, of saying whether these would be declassified documents. Meadows did note that documents both he and Rep. Jim Jordan (R-Ohio) had reviewed showed “a very clear indication of severe credibility issues as it relates to the dossier and Christopher Steele’s credibility.”

“We have [Obama’s Director of National Intelligence James] Clapper, [former CIA Director] John Brennan, all of them saying, ‘Well, we can’t get rid of sources and methods,’ and they’re right, we need to protect those. But at the same time, they’re saying people weren’t spied on. Well, you wouldn’t have to protect sources and methods if indeed Trump associates weren’t spied on by our government and others,” Meadows said.

Meadows predicted that the U.S. people would see “a lot of bias on behalf of just a few at the FBI.”

Will Anyone Be Held Accountable?

Meadows was asked a question that has been increasingly raised by those who have watched developments during the past two years: Will anyone be held accountable?

Meadows, who acknowledged it’s the No. 1 question that he’s asked, said: “I’m here to tell you this morning, the answer is yes. [Attorney General] Bill Barr is serious about making sure they re-establish the reputation of the FBI and the Department of Justice, and I can tell you that unless someone actually goes to jail, most of the people will think that accountability didn’t happen. But I believe, based on the documents I’ve seen, that crimes were committed and people need to go to jail.”

Although his comments engender some hope for actual justice, Meadows notably stopped short of saying that people would go to jail.