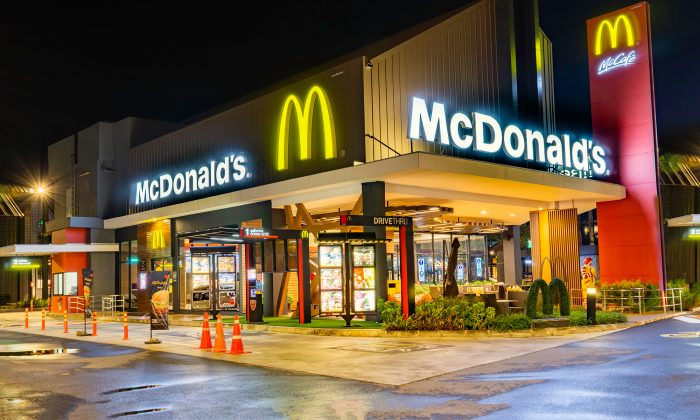 A McDonald's restaurant in a file photo. (Illustration - Shutterstock)
US News

A McDonald’s franchise owner responded after a police officer uploaded a now-viral video saying she is afraid of her food being tampered with amid widespread anti-police sentiment.

Deputy Stacy Talbert in Georgia posted a Facebook Live video on Monday saying that she ordered an English muffin meal and hash browns from a McDonald’s location in Richmond Hill. But she was left “waiting and waiting and waiting” while sitting in the drive-thru.

An employee delivered her only the coffee, she said in the video. “Don’t bother with the food because right now I’m too nervous to take it,” she told the worker.

“It doesn’t matter how many hours I’ve been up, it doesn’t matter what I’ve done for anyone, right now I’m too nervous to take a meal from McDonald’s because I can’t see it being made,” Talbert said. “I don’t know what’s going on with people nowadays, but please, just give us a break.”

“I don’t know much more I can take. I’ve been in this for 15 years and I’ve never had such anxiety about waiting for McDonald’s drive-thru food,” she added in the video, according to Fox News. “If you see an officer say ‘thank you’ because I don’t hear ‘thank you’ enough anymore.”

On Monday, three law enforcement officers with the New York Police Department were hospitalized after consuming milkshakes at a Manhattan Shake Shack, saying they had an unusual taste. The office said there was “no criminality” after an investigation.

Talbert said that her nervousness is “truly how we feel” following widespread anti-police demonstrations and calls to “defund” departments.

The McDonald’s franchise owners, Jill and Gary Stanberry, told news outlets this week that their “priority is for all customers to feel welcome and enjoy a great customer experience in our family-owned restaurants, including local law enforcement officers who protect and serve our community.”

“Unfortunately, we were made aware of a local police officer who experienced a longer than usual wait time and did not receive her full order right away at one of our restaurants. We have been in contact with this officer to apologize for this unsatisfactory experience and let her know that we would love to correct the inaccurate order when she has time,” they added. “We are happy to report that the officer was never denied service and also shared positive feedback on the employee with whom she interacted.”

“As a locally owned and operated business, we work hard every day to treat all of our employees and customers with dignity and respect,” the owners added.

A spokesperson for McDonald’s corporate office told Fox Wilmington that the delay in her order “was not intentional nor due to the fact that she is a police officer.”