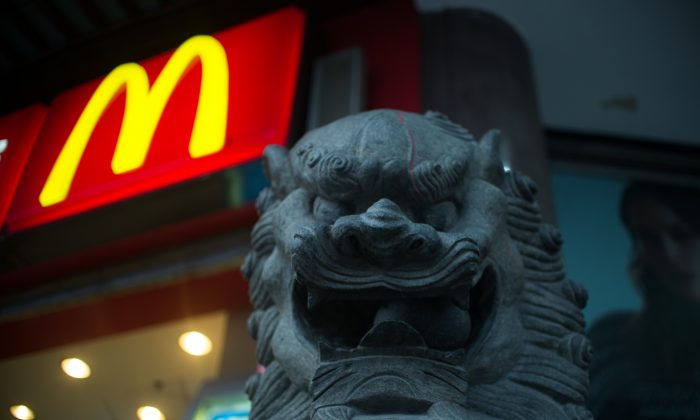 A lion statue is pictured next to a McDonald's fast food restaurant in Shanghai on July 28, 2014. (Johannes Eisele/AFP/Getty Images)
Business

Amid falling sales in Asia, McDonald’s has taken yet another hit: a Chinese joint-venture firm that supplies the fast-food chain with french fries was fined by Beijing authorities for water pollution, according to China’s state-run newspaper Xinhua.

The fast-food giant still hasn’t recovered from its latest food scandal: in July 2014, a Chinese TV investigative report found that McDonald’s and four other American restaurant chains were using a Chinese supplier that repackaged old and rotten meat.

McDonald’s has since stopped using Shanghai Husi and any facilities related to its parent company, OSI Group. But the damage was done.

McDonald’s sales in the Asia Pacific, Middle East, and Africa region fell 4.8 percent in last year’s fourth quarter, “primarily due to the lingering impact of the supplier issue on sales and profitability in China, Japan, and certain other markets,” the company said.

In the first quarter of 2015, sales in the same region fell by 8.3 percent, though the company reported “improving performance” in China.