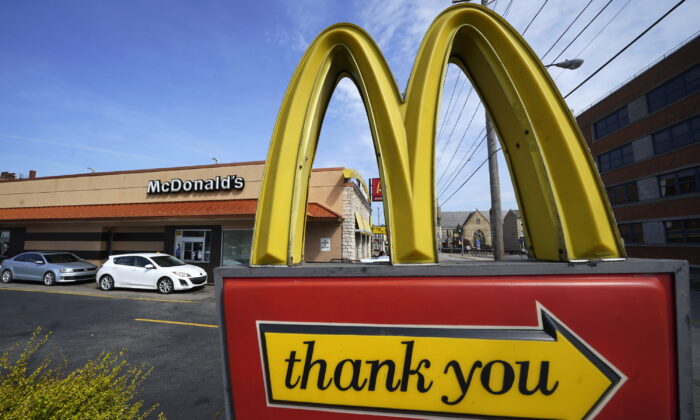 A sign in front of a McDonald's restaurant in Pittsburgh on April 23, 2022. (Gene J. Puskar/AP Photo)
By Bryan Jung

A McDonald’s franchisee in Pennsylvania was hit with a large fine for over a hundred child labor violations.

Santonastasso Enterprises LLC, which operates out of the Pittsburgh area, was accused by the Department of Labor (DOL) for the alleged violations at their 13 locations on Dec. 5.

The department DOL identified John and Kathleen Santonastasso as the owners of the limited liability company that operates the McDonald’s franchises in question.

The franchisee was fined $57,300 for 101 alleged child labor violations of the Fair Labor Standards Act, which restricts the amount of hours minors are legally allowed to work.

Santonastasso was the employer of 101 minors at the restaurants in question.

One of the violations allegedly involved a worker under the age of 16 of being “allowed to operate a deep fryer, which was not equipped with a device to automatically lower and raise the baskets.”

The company has been accused by the DOL of allowing 14- and 15-year-olds work over the three hour limit and work beyond the law’s 7 p.m. cut-off time while school was in session.

In some cases, employees under 16 were working more than eight hours a day on non-school days.

Santonastasso is also accused of allowing minors to work beyond the legally permittable 18 hour cap, during school weeks or past 9 p.m. between June 1 and Labor Day.

All of these practices are considered illegal.

Violation of US Labor Laws

He cautioned parents to be extra careful about their children’s working hours during the holiday season, when many employers look for seasonal workers.

“Right now, near the holiday season is where we’re more apt to see more of these violations with employers trying to bring on minors to fill in employment gaps,” DuMont said.

“We take our role as a local employer very seriously, and we regret any scheduling issues that may have occurred at our restaurants,” the Santonastassos wrote in a statement to USA TODAY.

“Our biggest priority is always the safety and well-being of our employees, and we have since instituted a series of new and enhanced processes and procedures to ensure employees are scheduled appropriately.

“While franchisees make local decisions for their businesses, including around labor and employment practices, they must comply with all state and federal laws, and we expect them to uphold our values in everything they do.” McDonald’s USA told Fox Business.

McDonald’s said that it “will cooperate with authorities as their investigation moves forward.”

Between the 2017-2021 fiscal years, authorities identified child labor violations in more than 4,000 cases, with more than 13,000 minor-aged workers found employed in violation of labor rules, according to the DOL.