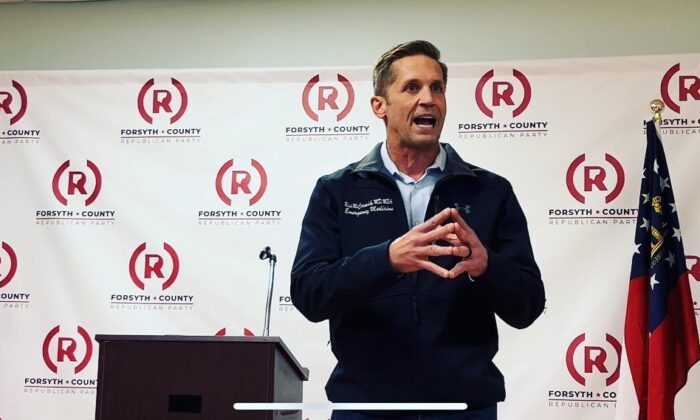 With 32 percent of the ballots reported at 8:26 p.m. on June 21, McCormick received 71 percent of the vote followed by Evans at 28 percent, according to The Associated Press.

In the May 24 primary Evans received 23 percent to McCormick’s 43 percent.

In a debate earlier this month, Evans said that Georgia should switch to closed primaries so Democrats cannot pull Republican ballots.

“What I’m now for is ensuring Republicans elect Republicans that will represent them, that Democrats don’t infiltrate, manipulate, influence our elections, which is what happened two Tuesdays ago,” Evans said.

Both candidates said they are the most conservative.

Redistricting shifted the 6th district to be heavily Republican.

McCormick accused Evans of changing his stance on multiple issues and has reminded voters about Evans’ past criticism of Trump.

Evans said that McCormick is a moderate who will compromise with Democrats if he is elected.

Evans, who is the former head of the Georgia Ethics Commission, told reporters that he has the “most momentum” of anyone entering the May 24 primary, which featured nine candidates.

Evans is the son of attorney Randy Evans, a prominent Trump donor who served as the U.S. ambassador to Luxembourg under Trump.

Evans is a “young man rapidly on the rise” and his dad is a “highly respected legal warrior,” Trump told reporters.

After he advanced to the runoff, McCormick issued a press release calling out “Fake Jake Evans” as a “woke activist lawyer and fake conservative with a troubling past.”

McCormick is endorsed by the Club for Growth.

A former military medic, McCormick served in the Marines and Navy before returning to Georgia to work for hospitals.

When asked why he did not vote in the 2016 Presidential election, McCormick said he was deployed to Afghanistan and his absentee ballot did not get processed.

In November, McCormick will clash with Bob Christian, a former Army soldier and restaurant manager who won the Democratic primary.

The district is overwhelmingly Republican, so McCormick is all but sure to win the House seat in November.