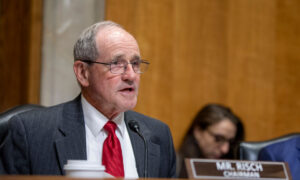 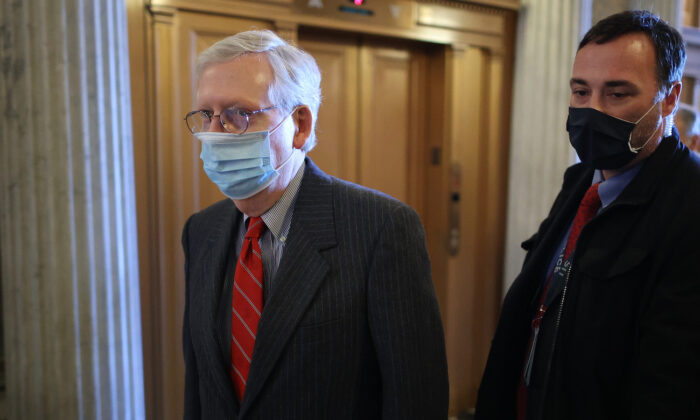 McConnell: No Senate Republicans Will Back Biden Infrastructure Proposals

No Senate Republicans are willing to support two recent infrastructure-related measures proposed by President Joe Biden, Senate Minority Leader Mitch McConnell (R-Ky.) said on May 3, setting up the potential for drawn-out negotiations or the use of reconciliation.

Biden has proposed a $2.2 trillion jobs package and a $1.8 trillion package for families, both of which include money for roads, bridges, and broadband, as well as manufacturing, public schools, in-home care, and other provisions. The president also seeks to boost taxes on wealthier Americans and corporations, and increase capital gains taxes.

“I think it’s worth talking about but I don’t think there will be any Republican support—none, zero—for the $4.1 trillion grab bag which has infrastructure in it but a whole lot of other stuff,” McConnell said during a Kentucky news conference.

Several Republicans, led by Sen. Shelley Moore Capito (R-W.Va.), have offered a counterproposal worth around $600 billion.

McConnell seemed to take issue with Biden’s tax proposal, saying the 2017 tax bill was the “most significant domestic accomplishment” of President Donald Trump’s administration. The GOP-led bill lowered the corporate tax rate to 21 percent from 28 percent.

“We’re not willing to pay for it by undoing the 2017 bill,” McConnell said.

But in a May 2 interview, Cecilia Rouse, chair of Biden’s Council of Economic Advisers, said the two packages are needed because “we are still 7 or 8 million jobs down from last year” and added that “in the last 40 years, we’ve been disinvesting in our economy.”

“The strategy here is to really create a partnership between the public sector and the private sector,” she said.

If Democrats unify behind either proposal, they could use the reconciliation budget process to advance legislation through the Senate without any Republican support, as they did with the $1.9 trillion COVID-19 relief package.

However, some Democrats, including Sen. Joe Manchin (D-W.Va.), have rejected the idea of passing the legislation without bipartisan support.

“For the sake of our country, we have to show we can work in a bipartisan way,” he said last week. “I don’t know what the rush is.”

Manchin also says he wants to focus on “conventional infrastructure” such as bridges, water projects, broadband internet, and roads.

Some Democrats, however, have said they want to pass legislation quickly before members need to focus on midterm elections.