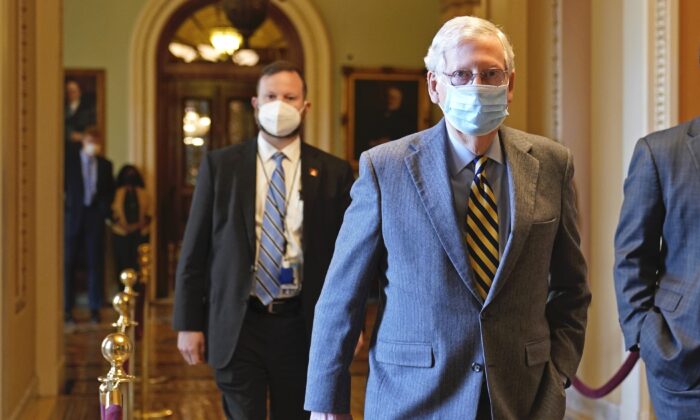 Senate Majority Leader Mitch McConnell (R-Ky.) said on Wednesday that the second impeachment trial for President Donald Trump would not begin until after President-elect Joe Biden has been sworn in next week.

His statement formally rejects calls imploring him to return the Senate to Washington early in order to begin the next stage of impeachment. This comes after the Democrat-controlled House voted to impeach Trump over a charge that the president incited an insurrection that resulted in the breach of the U.S. Capitol on Jan. 6.

“Even if the Senate process were to begin this week and move promptly, no final verdict would be reached until after President Trump had left office. This is not a decision I am making; it is a fact. The President-elect himself stated last week that his inauguration on January 20 is the ‘quickest’ path for any change in the occupant of the presidency.”

The Senate is out of session until Jan. 19, a day before Biden is scheduled to be inaugurated.

The House voted 232–197 to impeach Trump for a second time. Every Democrat voted in favor of impeachment, while 10 Republicans joined their colleagues to impeach the president.

Republicans who did not support the impeachment said that moving forward with the proceedings would further divide the nation.

McConnell, who did not indicate how he would vote, said that Congress and the executive branch spend the next seven days focused on “facilitating a safe inauguration and an orderly transfer of power to the incoming Biden Administration.”

Senate Democratic Leader Chuck Schumer (D-N.Y.) vowed in a statement after the impeachment vote that a trial for Trump will proceed and that the Senate will hold a vote to bar Trump from running for president again.

A number of media outlets, lawmakers, former officials, and other critics have blamed Trump for the U.S. Capitol breach last week. A group of rioters and some protesters waving American and Trump flags illegally stormed the Capitol building. The mayhem on the grounds left at least five people dead, including a police officer, and dozens of police officers injured.

A timeline by The Epoch Times shows that Trump was still giving a speech to a large crowd of supporters when rioters began efforts to enter the Capitol building. His speech to the crowd reiterated his allegations about election irregularities and fraud, and his dissatisfaction with the media and several lawmakers. Although he encouraged supporters to “make your voices heard” at the planned protest at the Capitol, he emphasized the need for the protest to be peaceful.

As thousands of protesters moved their demonstration to the U.S. Capitol, small pockets of violence were reported during clashes with police and media. The vast majority of protesters remained peaceful. At around 2 p.m., a subgroup of protesters began rioting, smashing windows in an attempt to enter the Capitol building as other protesters tried to stop them. Shortly after, Trump started posting on Twitter, urging his supporters to stay peaceful. He continued his urge for peace and respect for law enforcement throughout the afternoon and asked his supporters to go home in a video.