McCarthy Should Make Deal With Democrats to Win Speakership: Clyburn 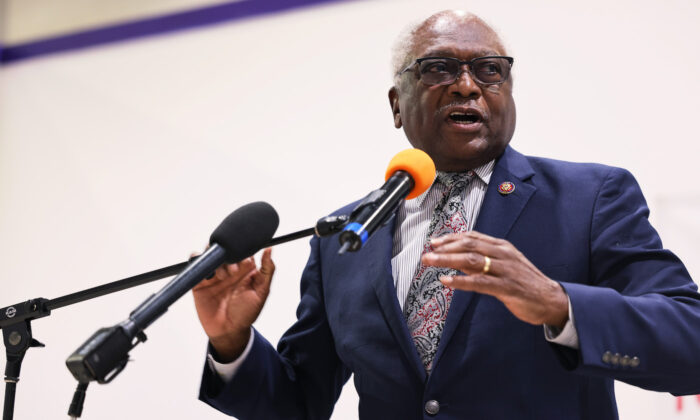 Amid continuing struggles for House Minority Leader Kevin McCarthy (R-Calif.) to secure the speakership, House Majority Whip Jim Clyburn (D-S.C.) advised the California Republican to make a deal with Democrats to push himself over the finish line.

Clyburn made the comments during an appearance on MSNBC’s “The Sunday Show.”

Asked whether McCarthy would be able to clench the speaker’s gavel, Clyburn mused, “I think so. I don’t know so, but I think so. You know, he’s been there a long time. He’s been the leader for a long time. I think that he has those that allow him to put together the kind of deals that were necessary to get to 218.”

But, Clyburn said, if McCarthy is unsuccessful in winning the support of his caucus, he may need to consider reaching across the aisle.

“If there are seven or eight people who are not going to vote for him, I’d advise him to go and look on the other side of the aisle and see whether there are some deals over there to be made as well,” Clyburn said.

Asked what such a deal would entail, Clyburn replied, “We want to push an agenda that makes this country’s greatness accessible and affordable for all. I just talked about the South. I just talked about the parts of the South that can lift up so much of this. I think that we can sit down to get there, and we might be able to forge an agenda that would be acceptable to 218 people.”

Clyburn’s comments come as McCarthy, Republicans’ nominee for the speakership, faces significant challenges from conservatives within his caucus.

Leading the conservative charge against McCarthy is Rep. Andy Biggs (R-Ariz.), who mounted a bid to win the nomination over McCarthy.

“We have a new paradigm here, and I think the country wants a different direction from the House of Representatives,” Biggs told Newsmax. “And it’s a new world, and, yes, I’m going to be nominated tomorrow to the position of speaker of the House.”

Ultimately, this did not come to fruition. In a vote among Republicans, McCarthy won 188 votes to Biggs’s 31, making McCarthy the Republican nominee for the top spot for the time being. The full House will eventually vote to elect the next speaker.

But McCarthy’s troubles are just beginning.

Other Republicans like Rep. Chip Roy (R-Texas) have echoed Biggs’s demand that the party take advantage of the moment to make significant changes to how congressional Republicans operate.

In an op-ed for the Washington Examiner, Roy blasted Republican leaders in both chambers of Congress.

“The leadership failed to produce the kind of concrete plan and bold strategy the moment required,” Roy said after Republicans only narrowly took the House and failed to recapture the Senate.

‘Will Not Play Politics’

Matthew Tragesser, a spokesman for Biggs, told The Epoch Times that they are concerned about past comments McCarthy has made about impeaching President Joe Biden’s appointed officials.

At the end of October, McCarthy said that Republicans “will not play politics” with impeachment.

But many Republicans have pushed for the party to use the majority to seek the removal from office of Department of Homeland Security (DHS) Secretary Alejandro Mayorkas and Attorney General Merrick Garland.

Republicans have blamed the worsening crisis along the southern border, which last month saw more than 185,000 recorded encounters with illegal aliens, on Mayorkas’s decisions as DHS chief.

Others have pushed efforts to remove Garland. House Judiciary Committee Republicans contended in a 1,050-page report that Garland’s Department of Justice has been “weaponized” against conservatives and enemies of the Biden administration (pdf).

He added that “the House requires a leader who will be aggressive and leverage existing oversight procedures.”

McCarthy Doesn’t Have the Votes

At the time of publication, it is evident that McCarthy does not have the votes to take the speaker’s gavel in January.

In a larger majority, this would be less of an issue; speaker candidates always receive some intra-party opposition. However, by current numbers, McCarthy will have only a four-vote difference to work with—meaning that he can spare almost zero defections in his quest to become speaker.

McCarthy has shot back at his critics, warning that opposing his speakership is equivalent to “squandering the majority” that Republicans won last month.

In the worst case, McCarthy and his allies have warned, this opposition could allow Democrats to choose the speaker.

Still, taking Democrat support to win the position would be a bad look for McCarthy, and one he has said he does not want.

Traditionally, the vote for speaker runs along mostly party lines, with the minority party historically voting against the majority party’s nominee. For McCarthy to use Democrat support to propel himself to the position would be unprecedented.

The final vote for speaker will be the first order of business for the newly-elected 118th Congress when they gather in Washington for the first time on Jan. 3, 2023.

Clyburn, a longtime Democratic leader, said after Speaker of the House Nancy Pelosi (D-Calif.), 82, and Majority Leader Steny Hoyer (D-Md.), 83, announced that they would step aside that he would seek a lower leadership position, that of assistant minority leader. He was elected to the spot on Nov. 30 and will serve in his capacity under incoming Minority Leader Hakeem Jeffries (D-N.Y.).