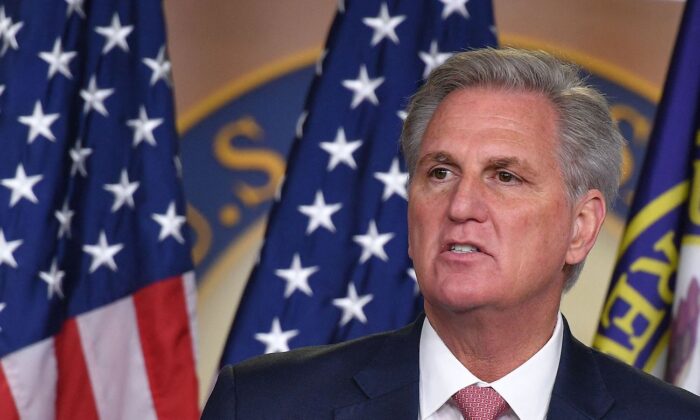 House Minority Leader Kevin McCarthy (R-Calif.) called on the Biden administration to declassify intelligence on the origins of COVID-19 to find out where the CCP (China Communist Party) virus came from.

“It is a very heavy crisis because think about … what people had to pay for this: 3.8 million people have lost their lives because China lied to the world—600,000 of those 3.8 [million] are Americans,” McCarthy told Fox News on Sunday night.

“What the first thing we should do is declassify the intelligence. That would show us that it came from Wuhan,” McCarthy said, noting that social media companies limited the ability to talk about where it came from and how to name the virus.

Former President Donald Trump early on said that COVID-19 “came from China” and sometimes called it the “Chinese virus.” His rhetoric and handling of the pandemic had been scrutinized by the legacy media and the left.

The legacy media had called the Wuhan lab leak hypothesis a “debunked conspiracy theory” until recently, as more experts now publically support the idea that the virus might have emerged from the Wuhan Institute of Virology.

On May 26, Facebook announced that posts pushing the hypothesis that COVID-19 is man-made would no longer be banned on the platform.

“The next thing we should do is deny the function of funding in Wuhan anymore,” McCarthy continued. “We should deny the [National Institute of Health (NIH)] from their ability to give grants or sub-grants to countries like China, Iran, North Korea, or Russia.”

NIH Director Francis Collins acknowledged in a statement last month that the NIH and the National Institute of Allergy and Infectious Diseases (NIAID) “have for many years supported grants to learn more about viruses lurking in bats and other mammals that have the potential to spill over to humans and cause widespread disease,” but denied that either institution “have ever approved any grant that would have supported ‘gain-of-function’ research on coronaviruses that would have increased their transmissibility or lethality for humans.”

McCarthy went on to say that the U.S. government should limit the visas coming from China and lift sovereign immunity, so for those 600,000 individuals who died, “their family can actually have justice and sue China.”

McCarthy also claimed that the 24th Winter Olympics shouldn’t be held in Beijing.

“If China lied to the rest of the world, why should the world reward them?” McCarthy asked.

The 24th Winter Olympic Games are scheduled to take place in Beijing and some nearby cities in February 2022.

White House Press Secretary Jen Psaki confirmed in April that the White House was not discussing a Beijing Olympics joint boycott with allies.

“The World Health Organization (WHO)—it shouldn’t get funding from America, it should be restructured,” McCarthy added, “But one of the first things President [Joe] Biden did was send them more than $240 million with no strings attached.”

Biden signed an executive order to halt U.S. withdrawal from the WHO on Jan. 20, his first day in office.

“We cannot get to the origin of this by listening to China or the World Health Organization. We should declassify the information and find first and foremost where it came from and let the entire world know,” McCarthy concluded.

The Biden administration won’t take immediate action on China to pressure the communist regime to allow an independent probe into whether COVID-19 originated in a Wuhan lab, national security adviser Jake Sullivan said on Sunday.

On May 26, Biden ordered the intelligence community to “redouble their efforts” and provide a report in 90 days about the origins of COVID-19.

The Epoch Times has reached out to the White House for additional comment.