McCarthy, Biden Disclose What They Discussed in First Call After Midterms 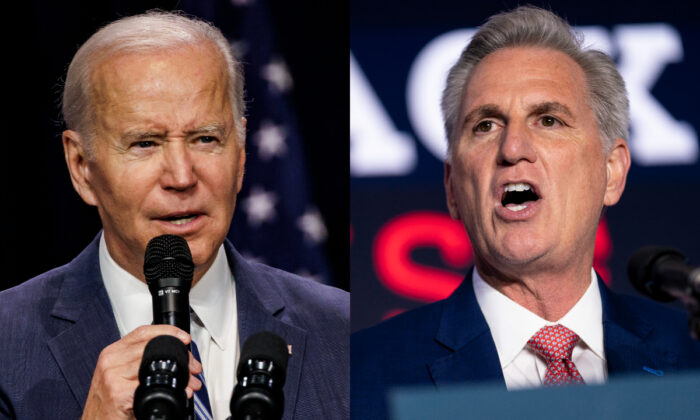 President Joe Biden and the top Republican in the House of Representatives offered slightly different accounts of their first phone call after the midterm elections.

House Minority Leader Kevin McCarthy (R-Calif.), who wants to become the next speaker if Republicans gain the majority, said that Biden congratulated him.

“He congratulated me, so for anyone who thinks we didn’t win the majority, Joe at least believes we did as well,” McCarthy said on Fox News.

The race for the House, which the Democrats now hold, is not yet called because of delays in vote counting in multiple states. Republicans had secured 210 seats as of early Nov. 11. A majority is 218 or more.

Biden, speaking with reporters after McCarthy’s TV appearance, said he did congratulate McCarthy.

The Democrat also claimed that there’s still hope that Democrats, who have secured just 194 House seats so far, can keep control of the House.

“It’s still alive. But it’s like drawing an inside straight,” he said.

Asked for his opinion of McCarthy during a press conference this week, Biden declined to offer much.

“I think he’s the Republican leader, and I haven’t had much of occasion to talk to him. But I will be talking to him,” Biden said.

Regardless of the final outcome of the midterms, the president added, he wants to work together with leaders from both parties to “deliver for the American people.”

McCarthy said Biden called him not only to offer congratulations, but to discuss where they could work together.

“I said, I will work with anybody that wants to put American first and move us in the right direction,” McCarthy said.”

He pointed to the poor economy, issues with energy, and the border crisis.

“I laid this all out to the president and told him, I will work with you if you’re willing to work on these items,'” McCarthy said.

The Republican also dismissed critics that have emerged after the election. Some members of Congress, including Reps. Andy Biggs (R-Ariz.) and Ralph Norman (R-S.C.), have said they’re not sure they’ll support McCarthy for speaker.

The mission going into the elections was to win the majority, to “stop Biden’s agenda,” and to “fire Nancy Pelosi,” McCarthy said, referring to House Speaker Nancy Pelosi (D-Calif.).

“All of that is accomplished,” he said.