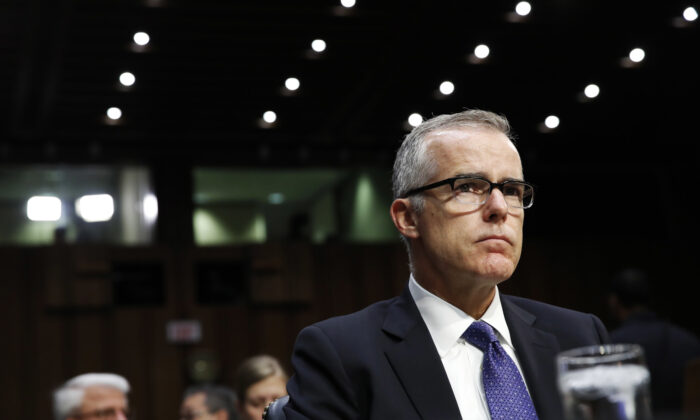 Former FBI Deputy Director Andrew McCabe won’t be appearing before a Senate committee this week after two members of the panel tested positive for the CCP (Chinese Communist Party) virus, his lawyer said on Oct. 3.

McCabe was scheduled to appear before the Senate Judiciary Committee on Oct. 6 to testify about the FBI’s handling of the probe into Russian meddling in the 2016 election, which later morphed into an investigation of President Donald Trump’s campaign.

An attorney for McCabe wrote to committee Chairman Lindsey Graham (R-S.C.), informing him about the former bureau official’s decision to pull out of the hearing. The lawyer said that McCabe didn’t want to put his family at risk of catching the virus after Sens. Mike Lee (R-Utah) and Thom Tillis (R-N.C.), who both sit on the committee, tested positive.

“It has been reported that at least two members of your Committee–Senators Mike Lee and Thom Tillis–have tested positive for COVID-19, and it may well be that other members of the Committee and staff who plan to attend the hearing will test positive between now and then, or may have been exposed to the virus and may be a carrier. Under these circumstances, an in-person hearing carries grave safety risks to Mr. McCabe, me, and senators and staff who would attend,” the attorney wrote.

“Mr. McCabe is willing, able, and eager to testify in person about Crossfire Hurricane at any time in the future when it is safe to do so. But he is not willing to put his family’s health at risk to do so,” he continued.

The Judiciary Committee is one of two committees of the Republican-led Senate reviewing the FBI’s investigation into the Trump campaign.

Graham announced in September that McCabe had agreed to appear before the panel, while suggesting that new revelations may come from the hearing.

“There’s a day of reckoning coming. Just stay tuned, and there’s more coming. There’s something else coming, more damning than this, believe it or not,” Graham told Fox News.

His comments came following revelations that the Washington-based Russian national who supplied former British intelligence officer Christopher Steele with most of the unverified claims in the infamous Russia dossier was himself investigated by the FBI on suspicions of being a spy for the Kremlin. The revelations were revealed in documents provided by Attorney General William Barr to Graham.

While aware of the counterintelligence concerns about Steele’s source, the FBI failed to disclose that to the FISA [Foreign Intelligence Surveillance Act] court as part of an application to surveil former Trump campaign foreign policy adviser Carter Page.

“To me, failure of the FBI to inform the court that the Primary Sub-source was suspected of being a Russian agent is a breach of every duty owed by law enforcement to the judicial system,” Graham said in a statement in reaction to the revelation.

Ivan Pentchoukov and Tom Ozimek contributed to this report.