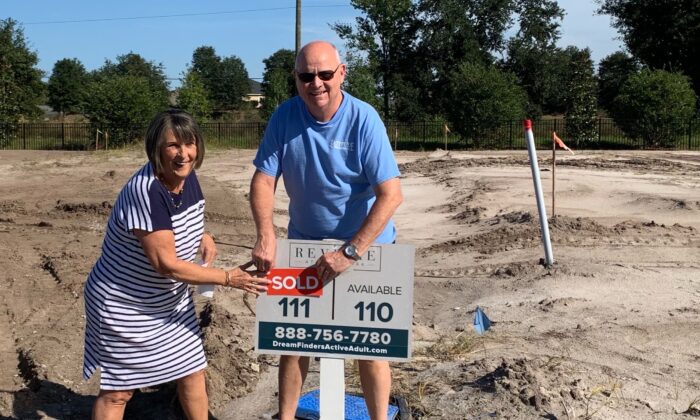 Claudia and Daniel Pisano celebrating their December 2021 move to Florida to build a home near their grandchildren. (Courtesy of Chris Pisano)
US News

The family of a man on a ventilator at Mayo Clinic in Florida asked a judge Tuesday to reconsider her decision to deny their request to try ivermectin and other medications and vitamins to help him recover from COVID-19.

“The Mayo Clinic is a fine institution, but it has lost its way,” attorneys Greg Anderson and Nick Whitney, of the AndersonGlenn law firm, and Jeff Childers, of Childers Law, wrote in their motion for rehearing and/or reconsideration.

“Mayo has raised up the concept of ‘its judgment’ to something mystical or maybe religious. In doing so, it has forgotten about its patients, who are best situated to make informed decisions for themselves, undistracted by professional concerns about position, policy, or politics.”

Daniel Pisano, 70, was admitted to the Jacksonville hospital in December after being diagnosed with an ear infection that was worsening. Though he tested negative for COVID-19 in the emergency department, he later tested positive and was moved to a floor where patients ill from the Chinese Communist Party (CCP) virus were being treated. He quickly declined and was put on a ventilator days later.

Bewildered by his sudden and unexpected decline, Pisano’s son, Chris, and his wife of 51 years, Claudia, researched alternative treatments for COVID-19 and eventually sought the advice of an outside doctor. Though he doesn’t have a relationship allowing him to treat patients at Mayo Clinic, Eduardo Balbona, M.D. reviewed Pisano’s records and assured the family he could help. He wrote up orders for medications he has used to treat many critically ill patients with COVID-19, and the family begged Mayo Clinic doctors to follow Balbona’s instructions.

That’s the treatment her husband would want, insists Claudia Pisano. She’s heartbroken because she believes her husband of 51 years could be healed if only he was given access to treatment she feels sure he would choose. She and her son legally have power of attorney to make decisions for him, while he’s unable to do so for himself.

Mayo Clinic doctors and officials have refused to try any part of what the Pisanos have requested. They say Daniel Pisano has a 0 to 5 percent chance of survival. Mayo Clinic representatives have not responded to repeated requests for comment on the case.

In desperation, Chris and Claudia Pisano filed their original request for an emergency hearing on Dec. 29 in the Fourth Judicial Circuit Court in Duval County. On Dec. 30, the two sides argued their points before Judge Marianne Aho.

After three hours of testimony, Aho sided with Mayo Clinic attorneys, who argued that ivermectin couldn’t be tried because it hasn’t been approved by the U.S. Food and Drug Administration for use in treating COVID-19. Aho declined to order Mayo Clinic to allow the treatment recommended by Balbona, the family’s trusted doctor.

That infuriated Chris Pisano, who feels his father is quickly running out of time. Doctors routinely use medications in ways that aren’t approved by the FDA, Dr. Balbona had testified at the hearing. One of the most common, he said, is aspirin, which is used as part of the treatment for heart attack, even though that is not an FDA-approved use of the drug.

The family’s updated request to the court filed Jan. 4 asks, “Who gets to choose a patient’s course of treatment? The patient? Or the doctor? Or even a hospital? Who is endowed with the right to choose when the patient is facing an imminent threat to his life, and multiple possible treatments are available?”

The lawsuit continues, “Mayo argues that Mr. Pisano gave up his right of self-determination and agency over the most important decision he will ever make when he was admitted to the Mayo Clinic; irrevocably and unwittingly handing that life-and-death decision over to Mayo. Mayo is dead wrong.”

“The patient does not surrender his agency at any point in time or space: not in the ambulance, not in Mayo’s parking lot, not in Mayo’s ER, not on Mayo’s 7th Floor, and not in Mayo’s ICU,” the attorneys wrote, citing the Florida Patient’s Bills of Rights.

That right, codified in the Florida Statutes, states that “a patient has the right to access any mode of treatment that is, in his or her own judgment and the judgment of his or her health care practitioner, in the best interests of the patient, including complementary or alternative health care treatments.”

The lawsuit states, “Mr. Pisano does not ask this Court to order Mayo’s doctors to do anything but step aside and allow Dr. Balbona to provide alternative treatments and stabilize his patient so that Mr. Pisano may be removed from Mayo’s hospital and trouble it no more. Mr. Pisano—by and through his surrogates—is eager to release Mayo from any liability for the outcome. Mr. Pisano asks only that Mayo not interfere, and provide short-term logistical support for Dr. Balbona to do his work.”

Balbona insists that Pisano could still recover if treated following the MATH+ protocol recommended by the Front Line COVID-19 Critical Care Alliance (FLCCC), which includes the use of ivermectin and other drugs and vitamins. The FLCCC lists many studies supporting the efficacy of the treatment. Balbona says he’s used the treatment many times successfully for patients just as ill as Daniel Pisano. They made full recoveries, he says.

“The Hospital does not argue nor did it present any evidence that Dr. Balbona’s alternative course of treatment is unreasonable,” the lawsuit continues. “Yet the Hospital would deny Mr. Pisano his right to access this alternative health care treatment from Dr. Balbona.”

The right of privacy also guarantees their client the right to medical decision-making, the Pisanos’ lawyers argue in the lawsuit.

And, they point out, Mayo Clinic has “admitted that its plan, however unintentionally made, is simply to continue doing what has not worked for Mr. Pisano and to allow Mr. Pisano to die.”

While they wait to see if Judge Aho will grant another hearing, Chris and Claudia Pisano continue to desperately search for ways to save their loved one. They believe the key is to get him out of Mayo Clinic.

Shortly after their plight was described in The Epoch Times, the Pisanos set up a fund allowing people to donate to pay for legal fees. As of Tuesday evening, more than $20,000 of their $100,000 goal had been raised. If the judge rules against them again, the family hopes to use the money to hire an ICU-equipped plane or helicopter to fly Daniel Pisano to a hospital where he can be treated with the protocol they want to try. That transport will cost at least $40,000 to $50,000, Chris Pisano said.

If that can’t be arranged, they want to bring him home for treatment by Dr. Balbona. They’ve spoken to other families who have weaned a loved one off a ventilator, brought him or her home for treatment, and saw the patient reach a full recovery using the medications Balbona is recommending, Chris Pisano said. Other families around the country have taken similar fights to court and have won.

The FDA has posted strict warnings against using ivermectin to treat COVID-19, despite many published studies and physicians’ testimonies suggesting that using the drug works.

A status conference before Judge Aho was set for 9 a.m. Wednesday.

Correction: a previous version of this article stated an incorrect date for the date of the arguments before Judge Marianne Aho. The Epoch Times regrets the error.