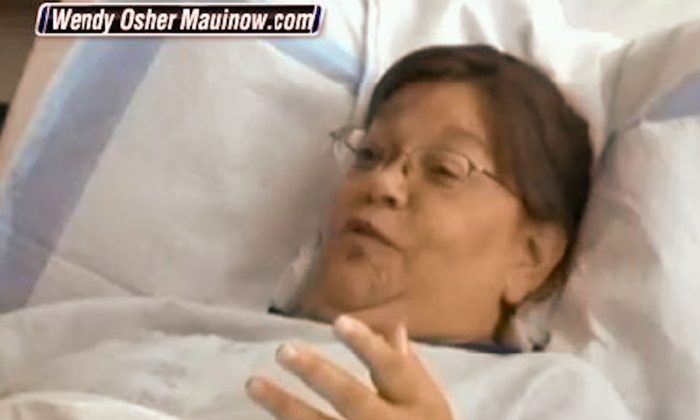 Evonne Cashman describes from her hospital bed the shark attack she suffered on July 31, 2013 off the coast of Maui. (Screenshot/Maui Now)
US

A snorkeler off the Ulua Beach Park on Maui was attacked last week with only minor wounds to show for it.

“I’m just glad that he decided he didn’t like me and let go,” Evonne Cashman told Maui Now. She said the shark may have mistook her for a turtle or some other creature in the murky water; it had a taste and decided she wasn’t to his liking, Cashman said with a laugh.

She was about 30 feet from shore in water about 10 feet deep when attacked, authorities told Hawaii News Now. The shark was estimated to be as long as 25 feet.

A 19-year-old surfer, Kiowa Gatewood, was hospitalized days before Cashman when a tiger shark, estimated to be some 10 feet long, bit his leg. He was surfing off White Plains Beach in Hawaii.

“It came up and its face was already on me, so I knew it was already biting me,” Gatewood told KHON 2. “What I did was I used my left hand and I hit him on the side of his face right over here, and then it let go and then I turned right around and it swam off.”

Gatewood’s sister, Tiana Lakanaria gave advice in a KHON 2 interview: “Be careful when you surf, just be aware of your surroundings and if the water is murky and it’s raining, don’t go out.”

Barbara Corey, 63, was in the water off Holden Beach in North Carolina with her 10-year-old student, Cassandra Calloway, on July 11 when a shark grabbed hold of her ankle and began thrashing.

Corey urged Calloway to reach the safety of the shore. Calloway’s mother, Christina Calloway, ran in to Corey’s aid. Corey’s ankle was badly injured and will take months to heal, but she said she will not be deterred from getting back in the water.

“I looked down and her ankle was mangled,” Calloway told ABC News. “It was horrid.”

Corey told ABC she was just happy to still have her foot and she was most concerned about her young student’s safety.

Girl, 15, Killed in England by Shark

A 15-year-old girl was killed by a shark while snorkeling close to shore off the French island, Reunion, in the Indian Ocean, on July 15. She was visiting her father in Reunion from the mainland. It is the second fatal attack in the area this year, reports the BBC.

Bathing was prohibited in the area due to danger of attack, reports the Guardian. Shark hunting had been encouraged last year after a rash of attacks.

The Discovery Channel compiled a list of the top 10 shark attacks caught on video.