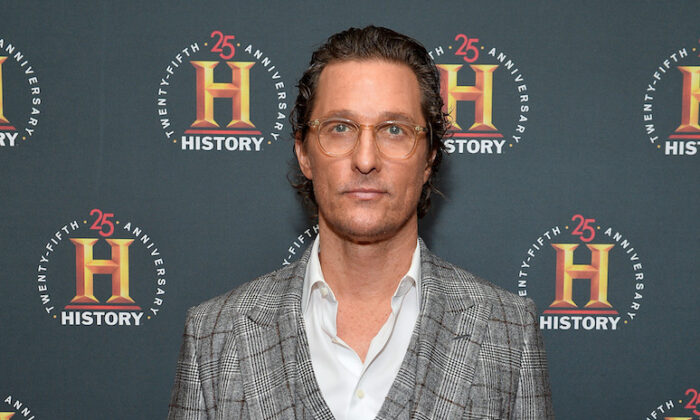 Actor Matthew McConaughey visited his hometown of Uvalde, Texas, on May 27 following the mass shooting at Robb Elementary School.

The Oscar-winning actor posed for a photo with members of the community in Uvalde just three days after Salvador Ramos, 18, opened fire inside the school, killing 19 children and two adults.

Rep. Tony Gonzales (R-Texas), whose district covers Uvalde, expressed his gratitude to McConaughey on Twitter and shared photos of the actor’s visit.

“This week was a solemn reminder that evil exists in the world, but we will never let it break us. We’ll unite to be an even more powerful reminder that love never fails & together we can change things. Appreciate Uvalde native Matthew McConaughey helping us heal,” Gonzales wrote.

In a second post, Gonzales thanked the actor for “helping to heal our community.”

“Your visit brought so many smiling faces to Uvalde. See you soon my friend,” the lawmaker wrote.

The 52-year-old actor—who announced in November 2021 that he won’t be running for Texas governor this year following months of speculation—did not talk to the press during his visit to the Uvalde Civic Center, Fox 10 Phoenix reported.

McConaughey was born in Uvalde, and his mother, Kay McCabe, taught at St. Philip’s Episcopal School, which is about a mile from Robb Elementary School, People reported.

The actor’s visit came after he shared a lengthy post following last week’s mass shooting, stating that “we are failing to be responsible for the rights our freedoms grant us” and that Americans cannot “make excuses and accept these tragic realities as the status quo.”

“As Americans, Texans, mothers and fathers, it’s time we re-evaluate and renegotiate our wants from our needs. We have to rearrange our values and find a common ground above this devastating American reality that has tragically become our children’s issue.

“This is an epidemic we can control, and whichever side of the aisle we may stand on, we all know we can do better,” he continued. “Action must be taken so that no parent has to experience what the parents in Uvalde and the others before them have endured.”

Gonzales told News 4 San Antonio on May 29 that there is a “deep mental health issue” in Uvalde and across the United States which is at the center of last week’s shooting at the elementary school.

His comments echo those of Texas Gov. Greg Abbott, who said at a May 25 press conference that the Biden administration must address changes to mental health care.

“There is no known mental health history of the gunman,” Abbott said during that conference.

“What I do know, in talking to the leaders here, as well as leaders around the state, one thing that has substantially changed is the status of mental health in our communities,” he said. “We as a state, we as a society, need to do a better job with mental health.”

Critics have accused Abbott of posturing about mental health after allegedly cutting nearly $210 million from the Texas Health and Human Services Commission, which oversees mental health services, between 2021 and 2022.

But an April 29 letter from Abbott to the heads of several state departments indicates the Health and Human Services Commission was already fully funded from other sources when the $210 million were transferred, and those additional funds would have lapsed if they weren’t appropriated somewhere else.

In a statement to ABC News, Abbott’s press secretary Renae Eze said the claim about cutting mental health funding was an “inaccurate, unsubstantiated narrative being spun by those trying to politicize a tragedy.”