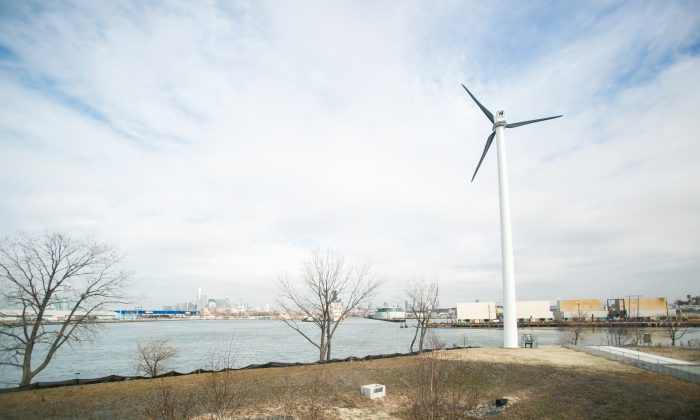 NEW YORK—The city can now add wind energy for commercial use to its list of sustainability initiatives.

Once a New York Police Department tow-pound lot, an 11-acre stretch of the South Brooklyn waterfront has become a sustainability hub responsible for most of the city’s residential recycling.

It stands 160 feet tall (including the blades at their turning peak), and is expected to generate 4 percent of the energy used at Sim’s Sunset Park Municipal Recycling Facility, which has a 40-year contract with the city to process all of the city’s metal, plastic, glass, and a portion of paper.

It has been a long four years of paper work and procedure to raise the turbine, according to Thomas Outerbridge, the general manager of Sims Metal Management. In a city as fast-paced as New York, sustainable initiatives are decidedly slow to move forward.

“I would like to do more [wind turbines],” said Outerbridge with a tired laugh. “But I’m not if it will take this long.”

New York’s recycling rate is just 15 percent, less than half the national average, and far behind many West Coast cities’ 65–75 percent recycling rates.

In 2008 the city signed an agreement with Sims to process 400,000 tons of material every year. Now one or two classes (both elementary and graduate) visit the facility’s education center on a near-daily basis to learn about recycling.

The step toward creating this infrastructure had been a long process, starting in the wake of 9/11.

Recycling in New York began in Greenwich Village in the 1980s, when environmental concerns were high and landfill usage peaked.

But a city as big as New York provided structural challenges in implementing recycling citywide, and New York is still playing catch-up.

The waste-hauling industry had been run by family businesses, and a citywide program required a shift to vertically integrated international companies that were bigger, according to a report authored by the Department of Sanitation’s Director of Waste Reduction, Reuse, and Recycling Robert Lange. These companies were skilled in trash disposal, and had little experience with recycling.

Also on the infrastructure side, facilities were necessary to process the recyclables.

Recycling was also just not a habit. A huge portion of New York residents live in multifamily buildings, where sorting recyclable materials is infrequent, confusing, or difficult. Until recently, it was hard to find recycling bins in establishments or public spaces (the city now has over 2,000).

The financial constraints brought about by 9/11 in 2001 caused the city to solicit processing services from the private sector, according to Lange. The program had even been suspended from 2002–2004 because of budget constraints.

The city’s existing contracts expired in 2002, and a lengthy legal process fraught with due diligence and acquisitions, eventually resulted in the agreement with Sims.

According to the city, Sims is a central part of New York’s long-term green initiatives plan PlaNYC 2030.

The facility at the South Brooklyn Marine Terminal operates sustainably.

It diverts 260,000 vehicle miles by using the waterways and rail. It also hosts one of the city’s largest solar panel installations.

The marine habitat 190 feet along the site has also been restored.

Fuzzy ropes allow mussels to filter harbor water and support marine life in the nearby reefs that are home to sea birds, algae, and crustaceans.